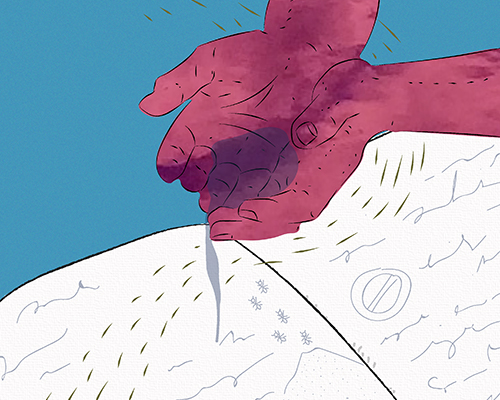 I was once an undocumented refugee. I came from a country where those who disagreed with the regime risked being arrested, exiled, or summarily executed.

We escaped to America to find safety, dignity, and most of all, the right to express ourselves openly without fear. The day I held my hand to my heart and swore my allegiance to the United States America, I vowed to speak out when confronting threat or an assault to my hard-earned American pride.

Like most U.S. citizens, I was filled with shame and disgust at who was elected president. I have held my breath since November 2016, and now I need to exhale. We have a commander-in-chief who openly expresses bigotry, and particularly shows disdain for women. The President of the United States has effectively given license to predators worldwide to crawl out of their burrows and carry out violent acts in his name. I feel threatened; as a woman, as a person of color, as an elder, and as a lesbian.

I feel nauseated, and I need to speak out as I did in the ‘70s when women joined together in the struggle to claim our dignity and our lawful safe place in society. We knew then that very few of us, straight or gay, had been spared from sexual harassment, and so we marched to take back the night. This time we march on every available platform, to raise a million women’s voices.

Contrary to much of what we are seeing in the news, men do not exclusively harass glamorous heterosexual women. There are countless women and lesbians like me, with unshaven legs and armpits, who have been subjected to such dehumanizing treatment, too. We are often derided and our complaints dismissed as wishful thinking. “Who would want to touch someone fat and unattractive like you?”

The prevailing atmosphere has brought back to many a flood of memories of sexual harassment, and time does not alleviate our disgust. Here is a partial list of the pain stirred up by this president and his supporters:

The taste of a man’s blood whose tongue I bit when he pulled me down and stuck it in my mouth.

The engorged genitals of a sixteen-year-old white boy who crept into my maid’s room and attempted to rape me, not knowing that I, too, was sixteen, a virgin, and not the 21-year-old mother I pretended to be. I had lied to his family in order to get a live-in job and hide from the INS.

The blood-curdling scream of Aunt Marie’s friend when I banged his private parts with a can of Ajax. He crept in and pushed himself on me from behind while I was cleaning the bathtub.

The Southern University professor who invited himself to my humble studio apartment under false pretenses, only to grab me inappropriately and beg me to accept his offer of a lavish life in exchange for “maybe once a week?”

Although I find it sickening to write these memories, I am convinced that, once we all document our stories of sexual harassment, we will bring about a mass catharsis that might inspire an honest assessment of our laws and social standards.

I want to encourage women like me to add their own stories to the larger narrative. Now is our time to join together like fire ants and confront the misogynistic elements of our society. Trump removed the protection Obama had set in place to help female students on campuses. Now when a woman is sexually assaulted, she is required to provide witnesses and other proof “in order to be fair” to her perpetrator.

The problem with this proposition is that sexual crimes are rarely, if ever, committed in front of an audience. Women and girls are often victimized in private, or with the tacit awareness of accomplices. Secrecy is the key element to this crime. How will a student provide evidence of a sexual assault? So far, Trump’s own victims have little recourse in “proving” he assaulted them, even after he openly admitted to it—on tape.

When I was 13 years old my mother confessed to me that she did not trust any men around her daughters, “not even your father.” He was barely ever around, so this was a disturbing revelation which took me years to understand. She shared this sentiment after revealing that when she was a young clerk, her boss’s father cornered her in his office and fondled her. Mom was tall and strong and could have easily overpowered the old man. Still, she chose to do nothing; not from shame, but from fear of losing her job, and hence her self-reliance.

She kept this incident to herself but vowed to tear up the next man who tried to lay his hands on her. Her secret was a powerful inheritance that I passed on to my own daughter and to anyone who wants to hear: Speak out, raise hell, and carry no blame for a perpetrator’s actions. America is, still, a country of laws.

My earliest memory of sexual harassment was in primary school when an older boy followed me after school two days in a row taunting me and pinching my breast. My slaps and threats failed to stop him, so I told my mother. The next afternoon she waited at a short distance. As he approached me, there she was, her huge hand smashing his face. Bam, girls are not for you to molest, bam, I want you to go home and tell your mother what you have been doing, bam bam bam until he begged for mercy. I felt protected and proud of being the daughter of such a fierce woman.

A few years ago, my sister forced me to meet a new boyfriend she had just found online. I felt awkward in his proximity, particularly after my sister shared with me his disgusting family history. When my sister left the room, as if choreographed, the man slithered to my end of the couch and put his hand under my dress. I jumped up with fire in my veins, showering him with verbal poison arrows.

He was my sister’s third such partner. She had blamed me when her first husband sexually harassed me when I was a student. I was sure she would dismiss me again. She later brought her man to apologize to me, but allowed him to further insult me by expressing shock at my reaction: “Your sister described you as the most refined in the family, but your stream of profanities proved the contrary.” My sister had again picked her side: “There you go again being dramatic! After all, he barely touched you.”

My mother married twice. Her second husband was a tall body builder who carried a revolver. My mother believed the presence of a strong husband would protect her daughters. It did not. Some molesters were mauled by my mother, others I handled alone. On a couple occasions mom simply advised me to avoid them—the neighbor who grabbed me during a ride to school, and the much-respected minister of tourism whose fingers always found their way into the panties of the neighborhood girls. 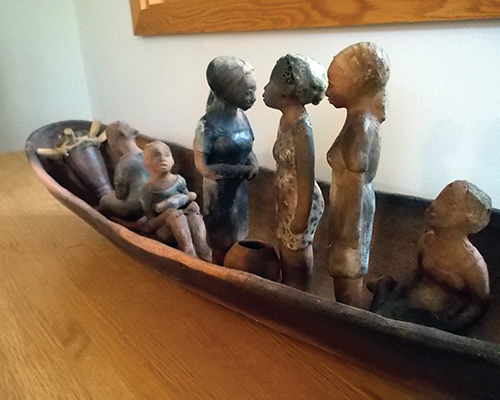 If you can speak out, you must

Because sexual molestation has numerous tentacles, our stories differ from each other. Some women and girls are deeply scarred and struggle alone with their shame. Some experience a lingering guilt for tolerating the indignities of sexual molestation in order to secure their financial survival. Some keep it secret to protect a perpetrator who is a member of the family, perhaps even their own father.

We need to talk for ourselves and for those unwilling or unable to do so; talk until we exhaust the topic. In the ‘70s, many in my community of lesbians joined the separatist movement in an attempt at protecting themselves from harassment and attack. This is no longer an option. Even back then, it left anyone not in the movement vulnerable. We will not succeed at dismantling misogyny unless we do it together.

Now is our opportunity to unite once again. The woman’s movement of the past was compartmentalized as it did not embrace the LGBTQ cause strongly enough. We can no longer afford to be marginalized; it should be all for one and one for all.

We are all, for the most part, a reflection of the parenting we receive. American presidents in recent history have had parents with strong ethical standards, particularly—God bless her—Obama’s mother, Stanley Ann Dunham. She was the classic example of a nurturing and powerful parent.

Why don’t we hear much about the people who raised Donald Trump? Can anyone explain this feral creature? How in God’s name did he miss the basic human values everyone is supposed to learn at a parent’s knee? Apparently, all he received was money, which gave him the delusion of omnipotence that has lead him to dehumanize just about everyone, women in particular.

Trump is neither crazy nor a fool. We have a saying in Kreyol: “l ap pran pòz moun fou pou l pa peye dw”—he is acting like a crazy person to avoid paying his dues. His obsessive tweets redirect the public discourse the way the killdeer fakes a broken wing to lure predators away from her nest. This man is more sinister than we imagine. But, I must nod to him in something like gratitude for waking us up from our blind complacency. Indeed, to every action there is a reaction.

I invite the lesbian community to add its distinctive lesbian voice to the collective indignation and to keep the focus on the toxic misogyny of the Trump regime. After all, if we don’t speak out for ourselves and our daughters, who will?