I have known Bernadette Witzack for over a decade, as a colleague, friend, and more recently as an artist whose work I am watching closely. Since writing about an artist with whom one is personally invested is journalistic taboo, this is admittedly less critical review and more a cocktail of musing and waxing, mixed in equal parts with a splash of my growing curiosity about the work and woman behind “Paintings Wearing Clothes and Climbing Mountains: A solo exhibition by Bernadette Witzack” (Diane Endres Ballweg Gallery, Madison Central Library 3rd Floor—Oct 7 to Nov 22, 2016).

The first thing I thought when I entered the gallery on opening night was, “What was Bernadette thinking?” If her work were entirely abstract, perhaps the need to know the answer to that question would be less acute, but there are clues and familiar objects in her drawings, prints, and mixed-media paintings that drive the viewer to look for the narrative. It is almost as if her work includes secret letters she has written and invited us to open. Both she and her work are quirky, playful, and adorable while being simultaneously serious, smart, and complicated. It can feel confusing, like awakening from a strange dream, the meaning of which only becomes clear after pondering it more deeply.

What does one make of a two-dimensional human figure created from a sparkly placemat, suspenders, and a red polka dotted bikini? Or of a black cervix-like shape dripping bright pink with a text bubble proclaiming “I conquered Everest?” What about a handsome print of Jojo the Cat? Why are the windows draped with three triangular layers of yellow frills, bright neon pink fabric, and a soft pink knit swath? What about the grid of small works containing rainbow patterns, birthday candles, and countless googly eyes? Her work begs the question, What does it all mean? The answer, I think, is: Exactly.

Bernadette’s humor portrays the gloriousness and wretchedness of being embodied, particularly in a female body, as much as it exposes her own quest to make meaning of the world around and within her. Rather than essentializing tragic patriarchal dramas, Bernadette opened to the wildness of mind and emotion in an exercise of self-reflection that dissolves, or at least dilutes, the pain of being, even if it does not quite end the confusion.

In this way, Bernadette is part of a new guard of feminist artists—her work explicates female issues and champions feminine tastes without taking the bait of misogyny. Her art appears to have been created simply to explore that which matters to her: her cat and her favorite colors, shapes, and fabrics. In this simple way, Bernadette, her exhibition, and the ongoing trajectory of her work, all triumph. 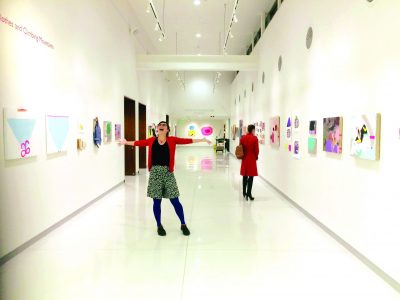 Bernadette Witzack at her art show