The Point of Return

Following the death of my sister in 2003, I flew deep into the throes of my addiction to methamphetamines. I quickly progressed from a weekend user to a daily user and switched from snorting to shooting. I do not recall ever making the choice to become an IV user; it was as if I woke up and syringes were a daily part of my life. The addiction had fully grabbed ahold of me and become my dearest, most trusted friend.

I lived in Florida at the time of my sister’s passing and the idea of being sober and living in Mineral Point, Wisconsin would have been laughable if I had really planned the move for much longer than a couple weeks. I was chasing love and, in hindsight, running from my current life. I was hoping to find something or someone who would love me and help me start the healing process. My now former partner Jason became that person, the one who cared enough to see past my lies, my addiction, and fully love me. That love set forth the path that has taken me to the beautiful life I live today.

I moved to Mineral Point, a town of 2,600 people, kicking and screaming. I never understood the allure of a small town, and I was sure that living there was going to be torture at its finest. Jason grew up in a small town in the Midwest and, after living in Florida and then moving to Madison, he found Mineral Point and decided that he/we had to live there. He would come home from day trips, touting how magical of a town it was and how great living in a small artist community would be for my art and me.

If I had only known then just how big of a role this small town and the people in it would play in my sobriety and creative journey, I would have moved years ago. I found in Mineral Point some of the best and most genuine friends I have ever had in my life. I grew up in Tallahassee, Florida, but Mineral Point is the place I feel most at home.

I worried about confessing my addiction to people that in my eyes might not be able to understand my struggle. I worried that I would become the subject of town gossip and be labeled as “city trash” bringing city problems to their small town. I soon learned that everyone became the subject of town gossip and it was very much an equal opportunity gossip mill. The gossip mill did not care whether I was a drug addict, the town tramp, or just the person that did not keep a tidy yard; you would be gossiped about and subject to an occasional glance of disapproval.

My normal routine of waking up and doing an injection of meth was replaced by breakfast and hearty conversations at the Red Rooster Café with a group of people that had no idea that they were getting me through the most difficult two hours of my day. I found solitude in my interactions with the disarming morning breakfast gang and soon began to look forward to seeing them and being at the epicenter of the town gossip mill. I got all the dirt on the happenings in town and, most importantly, I got through the cravings—not by sitting in rehab, but by being surrounded by what I consider the greatest asset of Mineral Point: its residents.

In the small town that I once thought of as the ultimate end to my ability to be labeled a city guy, I found refuge from what ailed me the most: a fight with intravenous drug use that had already consumed more than half my life. Who would have thought in a town of 2,600 people that so many of them would not only take interest in my journey, but were more than happy to become a part of my life in the most loving and sincere manner possible.

I remember going to the doctor to have blood drawn, and it was the first time in two years that I had a tourniquet on my arm. I freaked out and left, not realizing until I was nearly home that I still had the tourniquet on my arm. I remember reaching out to my friend Keith about the experience and he suggested I use syringes to paint with as a way of associating syringes with something positive in my life. This was the birth of my 2010 national exhibition called “A New Use for Syringes.”

Most people hide things like this from the world. Not me. I created 79 paintings about it, wrote blogs, and went on a five-city mini-tour that changed my life in ways that I still cannot wrap my head around today. 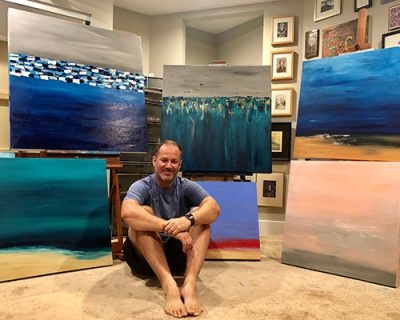 My work would not be complete without music. I have always painted to music, and my work has a rhythm to it—every stroke can be matched with a beat. In most cases, that beat comes at the hands of DJ Alyson Calagna. Electronic music was a trigger for me during my first two years of sobriety, but then I reconnected with the music I love, and the reconnection has allowed me to get to where I am today as a painter.

“A New Use for Syringes” was the first collection in my career that is musically attributed to one artist—Alyson. I did not realize how important music was to my art until I allowed myself to feel the desire to get high and paint through it. Thanks to Alyson, I graduated from compulsive drug seeking (my favorite rehab term) to compulsive beat seeking.

A new lease on life

I have since moved away from Mineral Point and now live in San Diego, California with my wonderful husband Clay. I went back, though, just this past August for an exhibition called “New Horizons” to celebrate my 12th year of sobriety with my Mineral Point family and friends.

It only seemed right to do the show in the town that made me who and what I am today. I am a happy, I am free of IV drugs, and I am creating and loving not only my complete self, but also the wonderful life I get to live now.

Learn more about Ben and his art at benbrummerhopart.com.