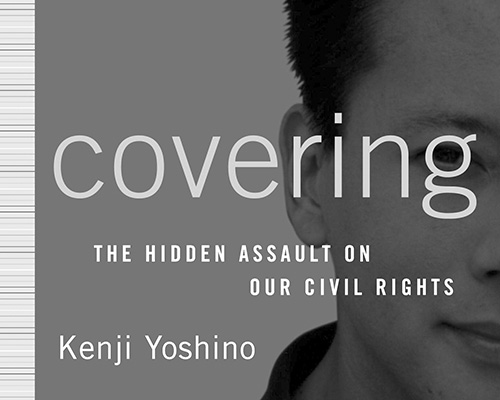 Legal books are seldom compelling to the majority of us. Covering: The Hidden Assault on Our Civil Rights by Kenji Yoshino is certainly an exception. The combination of legal scholarship and autobiography powerfully explain the personal and societal costs of hiding one’s true identity.

The concept of “covering” refers to minimizing minority status to more easily blend into the mainstream. It crosses all minority categories—gender, race, ethnicity, orientation, religion, and disability.

Yoshino explains that one can cover in four different ways: appearance, affiliation, activism, and association. Appearance refers to appearing more like the norm. Covering one’s affiliation means how one identifies oneself. Activism covering is the degree to which one politicizes one’s identity. Perhaps, as an employee you are openly homosexual but, to make life easier, you choose not to have your partner’s photo at your desk or have a sticker on your car. Finally, one may choose not to associate with others of your minority. Personally this brings to mind two young men, life-long friends, who suddenly disassociated themselves simply because both were suspected of being gay. They felt that being seen with each other brought their orientation into question.

Yoshino is a Yale Law School professor, trained at Harvard, Oxford, and Yale specializing in antidiscrimination law. He is also a Japanese-American, born of Japanese immigrants, who taught him to “be American” when in the U.S. and be Japanese when on extended visits to Japan. In other words, to cover his otherness wherever he was. Yoshino is also a gay male, challenged professionally and personally to be honest about his identity. It is his own experience with covering his ethnicity in two different cultures and his orientation that give him a depth of understanding and empathy for his subject.

Writing this review, I’m struck by the relevance of this book to the debate over Pride events and public perception. One camp decries the annual public appearance of leathermen and outrageous drag queens as bad for the LGBT cause. They urge everyone to just fit in with the norm. The other side says to celebrate what makes us unique, harnesses and boas proudly out of the closet. In both cases, individuals are trying to decide how others should act. The message from Covering is that we all need to be who we are, expressing ourselves as we feel comfortable. That it should be the right of the individual to decide. —Ward Holz

The Testosterone Files is a wonderful, stark memoir of what the hormone did to Max’s body during his 5 year transition from female to male. I feel so in debt to brave writers like him who have the courage to tell their stories and not just melt into the herd. Trans people who remain visible contribute so much to the cultural work this infant culture needs done around issues of gender and sexuality if we ever expect to reach adulthood as a society.

When Max read this spring where I work, it was a grand event—even though I wanted to challenge the anti-feminist rants on his blog (maxwolfvalerio.typepad.com/wolf_man_howls). He feels that his most dramatic changes were hormonal and indeed tells some male secrets that women gay and straight should know. Like: Sex can be food to many men, testosterone driven and not really personal.
He also raises questions about the value of surgery in gender expression and sexuality.

Although seeming burnt by San Francisco politics and disturbingly aggressive, the disagreements like this that honorable people can debate are something to be grateful for. —Sashe Mishur