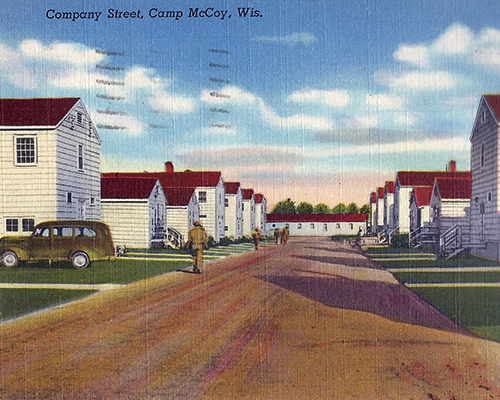 Besides their patriotic participation in the struggle against fascism, gay Americans also remember the war years and the post-war years of the following McCarthy Era as not so friendly. Several stories of Wisconsin gays shed light on this.

Ted Pierce, an African American gay man who lived most of his life on Madison’s Williamson Street and who was fond of French phrases, used the word “the Terror” from the French Revolution to describe the period. In an oral history decades later he recalled, “There was a point in that period where you didn’t have to have any evidence that you could definitely say anybody was gay. All you had to do was say you felt they were gay to the police, and the police would investigate you extensively right down to the point of asking if you had wet dreams who was it you were seeing in your wet dream.”

Ted had a handsome boyfriend originally from St. Louis at the military base at Truax Field. There was a supposed concern about sensitive war equipment and possible blackmail of gay folks as security risks. He remembers the Army arresting people every day. And if you were dishonorably discharged all your benefits would be denied. Ted Pierce remembered the uncertainty and the anxiety of the period, and that his friend would phone “to let me know he was still not taken in.”

Though for some 21 gay men at Truax who were “taken in” during the first half of 1945, they became guinea pigs in a research project. The results of the research were published in the Journal of Nervous & Mental Disease. It was noted all “these men voluntarily brought their homosexuality to the attention of the Chaplain, Unit Commander, or Medical Officer.” Apparently not much weight was given to religious and medical confidentiality in the Army of those days. It was noted, “They expressed a realistic anxiety that their homosexuality would lead to court martial.”

The researchers were Dr. E.L. Servinghaus of the then–Wisconsin General Hospital on the UW campus and Major John Chornyak of the Truax Army Air Force Hospital. These two doctors had the men under observation in a psychiatric ward for diagnosis. The “homosexual men were required to collect three 24-hour urine specimens for bioassay.” Another control group in the same ward of seven soldiers “with no reason to suspect homosexual behavior” also provided samples, as did some research assistants. The purpose of the research, which proved inconclusive, was to seek an endocrine explanation of homosexuality with perhaps an elevated level of the female hormone estrogen suspected of being present in homosexuals.

The silver lining for gay people was that the good doctors concluded, “In none of these cases was there a true neurotic type of conflict over the homosexuality as such.” Perhaps this was because in taking their case histories they found these men “had been aggressively homosexual both actively and passively since late childhood and early adolescence.”

Robert Peters of Eagle River in his For You, LiLi Marlene: A Memoir of World War II discusses the atmosphere that kept him in self-denial during the war.  When another soldier brushed the hair from his face and teased him that he sent out a “come take me” message, Peters records, he blurted out “I’m not queer.” The other soldier went on, “I know what jiggles your tits, Peters. I’ve been around. I’ve seen them straight off the farm smelling of cow shit. They’re ready to play. In the right light they show true colors. So, don’t hide from me, Mary.”

Peters wrote, “The only homosexual I had earlier known well was Roy Kamen, a stocky senior at Wausau High School. Craggily handsome, he wore his black hair swept up in a pompadour. He effused an outrageous humor. His general demeanor, while masculine, had a touch of the drag-queen.” Dressed in his drag, Roy takes him to crash the junior prom where they do some dances together before punitive chaperons chase them out. Once in the Army, though, Peters cannot admit to being queer.

The worry about self-admitting was quite real. Peters had a crush on another soldier named Danny Jackson. By now a sergeant, Peters wrote, “I dreaded that the CO might order me to investigate Jackson as a ‘queer’ and ‘undesirable.’ If that happened, my rational self would follow orders, even if it meant a dishonorable discharge. What a hypocrite! While I hungered for Jackson, I felt self-hatred and vowed to God that I would never sin again.”

Later, his superior, Major McKinney, told Peters, “‘This is confidential,’ he says. ‘But there are rumors about Jackson. Keep your eye on him, and let me know if anything untoward is going on. He pauses. ‘We’ve got to be on top,’ he advises. ‘No perverts here.’”

Peters described how Jackson invited him to go to a lake near Heidelberg where Danny would sun and acquire a tan. He wrote, “There are times when I am gazing at him, when he suddenly looks up and catches me, opens his legs (if he is seated), and smiles.” Further on, his self-prosecution complex lead him to wonder, “Had the CO asked Danny to find me out, as he had asked me to investigate Danny. My paranoia was a mouthful of bitter grapes.”

America sent these gay men to do their bit fighting the war, but they in turn were compelled to fight the Army’s and the larger society’s homophobia which considered them unmanly and therefore unfit. And so, thus would remain the status for gay and lesbian military personnel for more than another half-century.