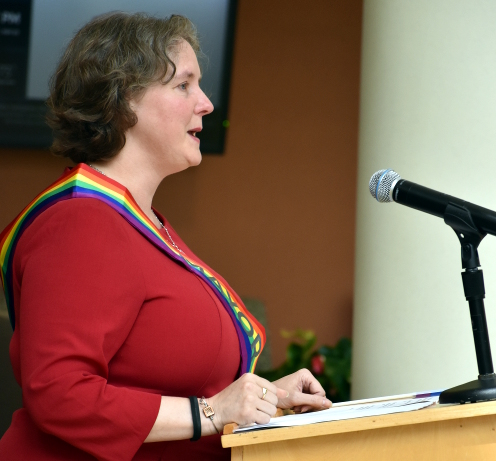 June is LGBTQ Pride month in the U.S., and Madison’s first openly lesbian mayor, Satya Rhodes-Conway, is making sure the city is showing its support in multiple ways – including by having the Pride flag flown outside both the City-County and Municipal buildings.

At a ceremony at noon on Monday, Rhodes-Conway and other city staff and elected officials raised the rainbow flag along with the state and city flags at the Madison Municipal Building. Across the street, employees also raised a rainbow flag at the City-County Building.

The Municipal Building will also be lit with Pride colors for the rest of the month, and other special events are to be announced as well. A reception for city employees was held afterwards.

“The City of Madison has a deep commitment to diversity and inclusion across the board, and one of my top priorities is to make sure everyone’s voices are heard in our decision making process,” said Mayor Rhodes-Conway wrote in a press release. “That is easier if our team is diverse and inclusive, which is why I am working to make sure that my office, the City workforce, and our City committees represent the full diversity of Madison. Pride Month gives us a great opportunity to celebrate that diversity.”

Late last week, Rhodes-Conway also attended a Pride flag raising ceremony at the American Family Insurance corporate headquarters on Madison’s east side. The company has flown the rainbow flag during June for several years, and touts its 100% rating on the Human Rights Campaign’s Corporate Equality Index. The company has also provided same-sex domestic partner benefits for the past 14 years.

Rhodes-Conway gave an at times emotional and heartfelt speech about the importance of Pride month to the gathered crowd of employees, her rainbow mayoral sash worn proudly. She spoke to her own personal history, as well as LGBTQ history generally: “For the straight people in the room, I’m going to be saying ‘we’ and ‘our’ a lot. I don’t mean you,” she said with a smile.

Asked about some of the things she’s focused on in her newly-elected position, Rhodes-Conway said she’s making extra sure to take her position as a role model very seriously.

“As we move up those ladders, it’s crucial for us to look behind and make sure those doors are still open – that it’s easier for those coming next.”

“There’s lots of excitement to use this moment and to create some positive change,” she added.