10 years of Our Lives 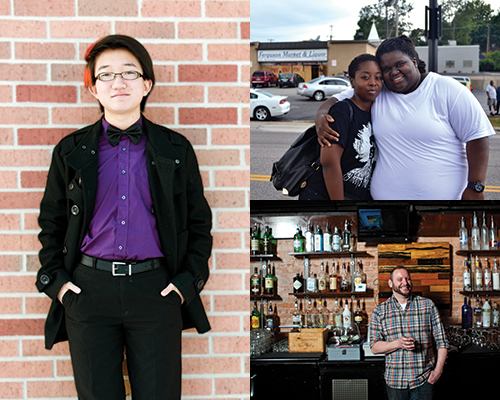 A lot can change in a year, let alone an entire decade. In an era when print publications are struggling to remain relevant and solvent, it’s no small thing that an independent, LGBTQ community-focused magazine has managed not only to survive for the past 10 years, but post impressive growth. We owe that, in large part, to the incredible support of the community, our partners, advertisers, and to all of our readers.

Our first issue landed in Madison in July 2007. In looking back at the past 10 years worth of issues, one begins to really get a sense of the monumental shifts in LGBTQ life that have happened—from the small scale on up to major victories (and setbacks) for our rights. Over the course of 2017, we’ll be taking a regular look back at the stories that have shaped our lives, starting with our first 10 January issues. 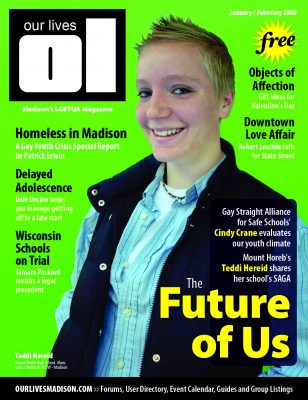 Before the Love List (or the “Caring and Committed Couples List,” as it was originally branded), our January issue began as the place where we focused on youth and families. In particular, we were proud to feature an incredible piece on LGBT youth homelessness written by Patrick Erwin. It focused the story of one young gay man in particular, who eventually found help through the Teens Like Us program at Briarpatch. The article helped highlight a very real (and ongoing) issue faced by young queer people in particular, while also lifting up the people working to change things for the better.

Our cover story was by then-U.W. freshman Teddi Hereid about her work to create the first GSA at Mount Horeb High School while a student there. We also looked at the idea of “delayed adolesence” brought on by coming out later in life, with some ideas from writer Dale Decker about how to approach the issue. And finally, we included a profile of Dr. Tamim Sifri, who took over Smart Dental that year and has since thrived in the practice, especially in terms of providing a comfortable space for LGBTQ patients.

That was the year of fallout from the Prop 8 decision in California, but fortunately we had (and still have) attorney Tamara Packard to help unpack the 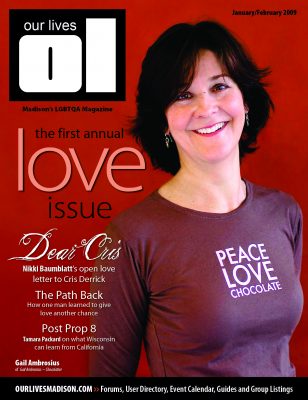 legal and social implications of the ruling that briefly undid early progress toward marriage equality. We also included our first-ever anonymous article, about a reader’s late-in-life embrace of her sexual identity.

We were proud to include a tribute written by the late Nikki Baumblatt (former OutReach Development Director) to her partner, Cris Derrick, looking back and thanking her for the enormous support shown during Nikki’s struggles with her health. Sadly, it was to be her final contribution, as Nikki passed away in May 2011. We’re forever grateful to her contributions not just to the magazine, but to the community as a whole.

Our Lives publisher Patrick Farabaugh wrote his deeply personal narrative about finding his first love as a deeply closeted rural teenager, and about the pain, grief and isolation that followed after losing him. We also featured a coming out story by Jake Abely, who had only just begun his journey as drag queen Davina DeVille. Jake has since moved to NYC and does makeup and makeup effects professionally. This was the first issue that mentioned the new women’s football team, then called the Wisconsin Wolves but since renamed the Blaze!

We debuted the “Caring and Committed Couples List” as a joint effort with Fair Wisconsin, part of the campaign to win marriage equality in Wisconsin. Some 265 couples submitted their names to the list in that first year, in a show of love and pride. It has since nearly tripled in size and we’ve grown it to include the myriad ways LGBTQ people form romantic relationships. We published another anonymous piece, this time on transgender homeless youth. Rita Adair wrote about her efforts to create a LezTalk-style listserv for queer women of color, and we profiled the owners of the Soap Opera (who have been together for 45+ years!). Also in this issue, First Congregational Church took out a full-page ad on the back cover that featured same-sex members of their congregation. They would go on to use that ad in the Wisconsin State Journal, bringing the message of inclusion to an even wider audience. 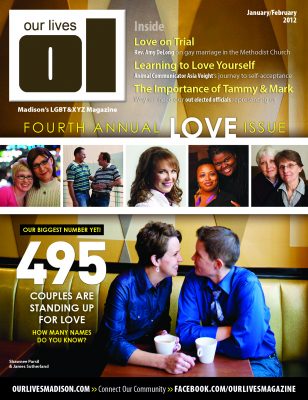 Tamara Packard wrote on the importance of electing Tammy Baldwin to the Senate, and Mark Pocan to Congress. Looks like she was pretty right-on. We also featured a story about Methodist Rev. Amy DeLong, who was put on public trial by the church for marrying two women. It offers a glimpse into the (still ongoing) struggle of pro-LGBTQ clergy serving within denominations or religions that don’t fully embrace LGBTQ people and their rights. Our “Caring and Committed Couples List” grew to include features on some of the people included, something we’re happy to continue to this day.

Our own chapter of the Sisters of Perpetual Indulgence emerged and we included a fun feature on them. Dutch’s Auto, which provides top-notch service on the east side, was profiled for being a rare instance of a female-owned and operated auto shop. Longtime arts writer (and Madison Arts Commission head) Karin Wolf penned a great feature about Clarence Cameron and Bob Lockheart—Cameron being the co-founder of Art Fair Off the Square and a founder of the Wisconsin Alliance of Artists & Craftspeople. They’re also one of the longest-lasting queer male couples in the area! Finally, we were thrilled to include Danez Smith’s musings on learning to love his whole self—and even more thrilled to have since seen Danez go on to national prominence for his poetry and other work.

Bob Mahr talked about taking over ownership of beloved Madison institution the Shamrock Bar, as well as the outpouring of support it took to make the transition possible. Caroline Werner took a look at ways to access LGBTQ-friendly co-housing, specifically what was then being planned for the Union Corners development. That project is finally underway, but without the cohousing model (it will instead include units aimed at “grandfamilies,” or grandparents raising grandchildren). Instead, the cohousing group is focused on a new site on Winnebago Street.

That year we introduced photos on the couples list, in an effort to reduce bi- and trans-erasure, and to just everyone lift up. We included a fabulously colorful profile of Trixie Mattel, who was about 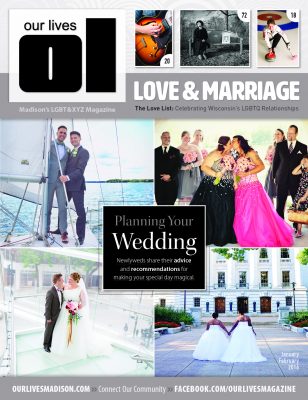 to compete on RuPaul’s Drag Race (and become a fan favorite). M Adams wrote about traveling to Ferguson, MO to be part of protests there, and how the Black Lives Matter movement connects directly with queer liberation. Virginia Harrison reported on the Wisconsin Trans Youth Research Project, which was the first qualitative research on local trans youth.

Our final page featured activist Skylar Lee, and their journey and struggles as a trans-identified Asian American youth. It was a powerful piece by a bright and promising human being that we were heartbroken to lose to suicide just a short while later.

Little did we know when we put this issue to bed just what an intense year 2016 would end up being. There was plenty of both optimism and ongoing struggle within the pages, and it turns out that was just the beginning: In light of same-sex marriage being legalized the year before, we introduced the LGBTQ wedding planner feature along with our Couples List. The list itself continued to grow and become more diverse/inclusive, with an average of 500+ relationships now represented.

The issue also included a moving piece on life as an LGBTQ widow/widower, with memories of and tributes to loved ones since passed on. Joanne Lee, the mother of Skylar Lee, also penned a gut-wrenching testimonial to her relationship with her child and grief over Skylar’s death—but also her determination to step up and do work to support LGBTQ youth and suicide prevention. We also talked about the introduction of Wisconsin’s own anti-transgender bathroom bill (AB469), which, while ultimately left behind in the last legislative session, looks posed to make a comeback in the new year and under a re-emboldened, Republican-controlled government.

You’re holding the newest issue of the magazine in your hands right now, and we hope you take the time to read through its pages and the stories and people represented within. It’s been a hard year, to say the least, and things look to be even more bumpy in the coming days and months. But if one thing has remained wonderfully consistent throughout all of our ups and downs, it’s the strength, love, and resiliency of the LGBTQ community.

Now more than ever we will need to rely on one another to continue to fight the good fight, to live as authentically as possible, and to ensure that our lives are always recognized and celebrated.