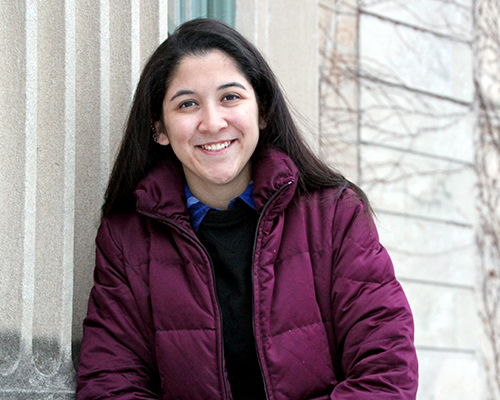 My name is Roxanne Meyer, and I am an actuarial science major at UW-Madison. I am also one of the co-presidents of UW-Madison’s queer and ally social group, the Ten Percent Society, and a queer mentor. While I’m very “out” now, I wasn’t always.

I was raised in a small, extremely religious, conservative Wisconsin town. My mom, who lived and left her heart in San Francisco, as she would say, is very liberal. My dad is not, but to be honest, it didn’t really affect me growing up. I didn’t realize I was gay, so it didn’t affect me when he’d use the term “queer” derogatively.

Only when I was in the 9th grade did his views actually begin to affect me. That’s when I fell for my first girl. I was so scared to come out that I hid the relationship for months. I couldn’t even work up the courage to come out to my twin. Eventually, I told my friend and had her tell everyone because I didn’t want to see people’s reactions, which is how my completely accepting twin finally found out.

My mom’s reaction was the first I ever witnessed in person. She saw a hickey on my neck when she knew I had been with a girl the entire day. I was mortified—and, worse yet, she insisted it was a phase. I was confused—she said she would love me no matter what. With her negative reaction, I retreated back into the closet, and hid my sexuality from my dad, stepmom, and older brother.

The only thing that got me through my “re-closeted period” was being the president of my high school’s gay-straight alliance (I told my dad that I was at “art club” instead). There I had a community, even within a conservative high school where I was bullied by both students and the principal.

In February of 2009, I was outed to my dad and stepmom. I came home sobbing, waiting for him to get home. But something weird happened. He came home and hugged me. He told me he loved me and that he was sorry I felt I had to hide it from him. And my stepmom wrote an elegant letter telling me that she too accepted me.

Two years later, I was admitted to UW-Madison. I figured the city would be perfect for me—I would be far enough away from home that I could come out completely, without fear of complete judgment. That fall, I attended the LGBT ice cream social, and I knew I had made the right school choice. There, I signed up for the Ten Percent Society (TPS). I attended the first meeting, and afterward, a group of us played Apples to Apples and went to “Waffle Wednesday” at Frank’s dining hall.

The group we formed that night remained close. We eventually had a ritual—TPS, then Waffle Wednesdays. The best part of it all was that I finally found a queer group that I could really talk to and that understood what I was going through in terms of my sexuality. In the spring, TPS held officer elections, and I was nominated by one of the then co-presidents. I ran as co-president and was elected.

My hope for club members is that they’re able to talk about all the queer things they never could at home, with friends like the ones I made my freshman year. With about two events each month, we hope to bring in and welcome as many people as possible.

In addition, I am also a queer mentor. I think my experiences with both coming out of the closet on my own terms and with being outed are what motivated me to become a mentor. I also know that coming to college as a queer student, and navigating coming out to new people, making friends, dating, etc., can be extremely intimidating. I wanted to help get queer underclassmen comfortable in their new environment like the older TPS members did for me when I was new here.

It has been a long and sometimes difficult process coming to terms with my own sexuality (see: hiding my sexuality from my own twin). To be honest, I could never have been this relaxed about telling my story before coming to Madison. Case in point, I’m still not out to my older brother, but I agreed to write this article knowing that he might find out about it, because I want him to finally know.

I came to Madison looking for a better sense of identity—something I could take back to my hometown or to wherever I go next. I’ve also found things that I wasn’t looking for: lasting friendships, a sense of community in a big city, and even some romance (shout-out to my amazing girlfriend, whom I met at TPS). I still have three more semesters left here—who knows what else I’ll find, but I look forward to finding it.