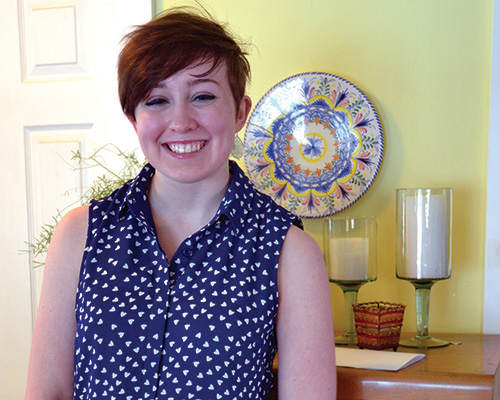 My name’s Catherine Hartup, and I’m a senior at Baraboo High School where I serve as the president of our Gay-Straight Alliance (currently in the midst of a more inclusive name change to Gender-Sexuality Alliance). Ever since I realized I fell under the LGBTQ+ spectrum in middle school, fighting for our justice and inherent rights has been an integral and significant part of my life.

Over the past four years in GSA (two of those spent as the club’s president), I’ve worked passionately to promote education and activism for LGBTQ+ people. The summer following my attendance at GSAFE’s 2013 Leadership Training Institute conference, I challenged myself to do more with the group than had been achieved in years past. Since then, I’ve given presentations and hosted club discussions on topics ranging from asexuality and aromantic awareness, to bisexuality visibility, to the intersection of race with gender and sexual orientation.

Last year, I involved GSA with our school’s Key Club during Project Respect Week, when we presented a video featuring staff members speaking their own messages of support for LGBTQ+ students. Key Club’s mission has always been about anti-bullying efforts, but sometimes the slogan of “we support all students” isn’t enough. We need validation of students who aren’t always as readily recognized, such as those who identify under the LGBTQ+ spectrum. I continued this theme with our poster campaign for Day of Silence, highlighting the struggles of not only LGBTQ+ students, but also females, people of color, and disabled persons.

This year, the club’s taken a strong stance on continuing the fight for transgender justice. In the fall our school board proposed a policy change that allows transgender student athletes equal access to sports teams that align with their gender identity. Predictably for a small town such as Baraboo, much of the community met the amendment with heated (and misinformed) opposition. At the first school board meeting I attended where the policy was discussed, there were several community members present who spoke out against it and only one (my GSA faculty advisor) who voiced support.  By the next meeting, increased visibility from newspaper coverage and a general town buzz drew in a large audience urging the school board to adopt the policy, as well as many who again opposed it.

When it was my turn to speak during the public comments, I kept my remarks short and to the point: the school district promises to welcome and protect all students, and if the board voted no on this proactive policy prohibiting discrimination against transgender students, they were not following through on their own promise. The media coverage of my short but certainly impassioned speech was honestly astounding—I had complete strangers coming up to me and saying thanks.

The publicity surrounding the public event, the successful passage of the policy, and my comments as the sole student speaker all correlated with GSA’s actions: since junior year, I had wanted to host a clothing drive for organizations that provide free and accessible attire to trans* or non-binary identifying teens. We were finally able to accomplish this last December after jumping through the hoops with administration to ensure the word “transgender” was publicly attached to the drive. Also in December, GSA’s advisor and I gave a presentation for staff on how to be allies to trans* and gender nonconforming students.

Next year, I’m headed to the East Coast to study at the small liberal arts women’s institution, Smith College. Following this, my great ambition is to create and support more radically diverse media than what we see in our mainstream culture today. This means more diversity in race, gender identity and expression, sexual orientation, and the myriad other underrepresented groups in the most widely consumed movies and TV shows. And I’ll always be working toward LGBTQ+ justice, continuing on the road I’ve started down in high school. n