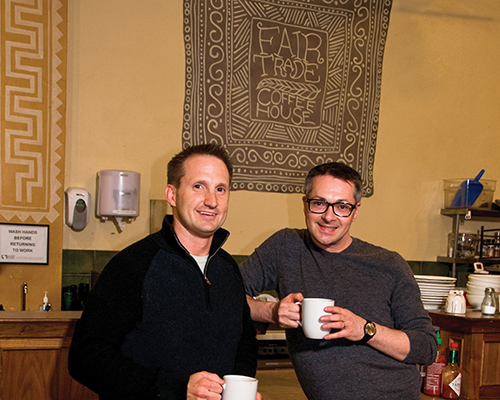 I am sitting in the back office of Fair Trade Coffee on State Street with the new owners, Casey Thompson and Thomas Beckwith-Thompson, when Thomas’ phone chimes with a distinctive ring tone. “The cafe is my baby—family members—and the cafe always gets picked up within one ring,” Thomas tells me after checking the screen.

Tom and Casey took over ownership of the business at the beginning of March and so far have no intention of changing anything significant. “Why mess with something that works?” Casey says. However, they do plan to experiment with more breakfast options and cold brewed coffee in the summer, as well as a back porch area that Tom is particularly excited about. “Mostly we are just cleaning and organizing,” Tom adds.

They each have very different reasons for purchasing the cafe. Tom fondly remembers hanging out on State Street as a high school student, dreaming of one day owning a coffee shop like the ones he had spent time in. For Tom, this was an opportunity to create a place where everyone feels welcomed and comfortable, a place that is inclusive. He points out that the cafe has specifically sought out vegan and vegetarian food options, and that their art is local (and for sale). Tom spent his time after high school striving to make his dream come true by working in coffee shops around town, most recently managing a place in Fitchburg.

Casey, who describes himself as the business-minded and less emotional of the two, just wanted to own a business. “The only opportunity for advancement for Tom is ownership,” Casey explains.

The opportunity to own the shop presented itself unexpectedly, and wasn’t a smooth process by any means. Tom was surprised when he heard from one of his vendors that they were considering buying the shop, which hadn’t been on the market at the time. When a few months passed and the vendor’s plans changed, Tom and Casey decided to put in an unsolicited offer on the cafe, which was still not advertised as being for sale. To their shock and delight, their offer was accepted. “It was important to the owners that the right people bought the business,” Tom says. “They didn’t want to sell it to someone corporate, or someone from out of town.”

Casey described the process of securing the sale, transferring titles and licenses, and securing lending for the business as “task heavy.” “It was an emotional rollercoaster. It felt like walking a tightrope, where one day we were elated, and then we would hit some seemingly insurmountable bump and be devastated,” Casey explains. “I wasn’t comfortable that we would be able to buy the business until we were at the closing table.” For his part, Tom says he was confident through the entire process.

The two men who have known each other since fifth grade and went to the same high school were not friends until they bumped into each other at a reunion a few years ago. “We took things slowly,” Tom says. They have been together as a couple for six years, and on December 14, 2014 they were married in their living room. “It wasn’t a big deal,” Casey says, ever the business-minded one.

It is clear that the guys are off to a great start. “Every night the previous owner stops in to check on us, to see if we need help, to see if things are going well,” Casey tells me.

Adds Tom, “This place screams Madison. It IS Madison.”