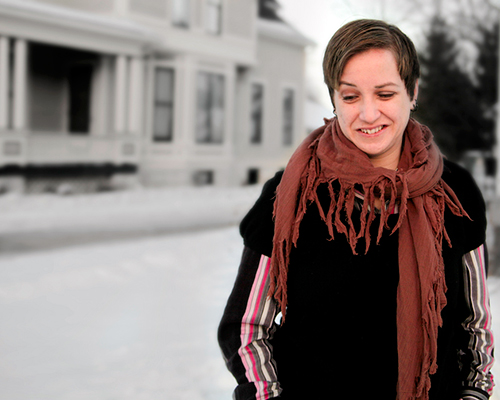 I get asked how exactly I came to do trans advocacy and activism as a non-trans person. Aside from the obvious (my wife is trans), there is no avoiding the fact that trans people are my people. I used to flinch a little when someone assumed I was trans because of the work I do, but now, in having been honored to meet and know some truly remarkable people who happen to be trans, I consider it a compliment.

This is the fourth year and the fourth time I’ve taught a Transgender Lives course at Lawrence University in Appleton. We always spend a week of the course specifically on violence against trans people—the kind of transphobia and gender panic that cause people to be so brutal. And every year, the week before we start that section, I tell my students that we only have to wait a little while before a new case of trans violence is reported. I can say that on Thursday, and by the time we’re beginning the section the following Tuesday, I’ve been proven right. There is always one. Last year Chanel Larkin was murdered right here in Milwaukee. I want to see a year where it’s not true, and another and another, and hopefully, eventually, I will only teach that section of Trans Lives as history.

The violence, in some ways, is the least of it: trans people are still misunderstood, considered perverts of one kind or another—you know how it feels to be labeled like that—or are otherwise pathologized for being crazy—you know how that one feels too—and otherwise assumed not to be trying hard enough to live in the gender they were declared at birth and to live within the binary. Depending on the kind of trans person they are—and here I’m using the alliance or umbrella model of trans identities—they may fit into the binary after transition, or not. For me, the really telling point of evidence was meeting trans women who identified as butch post transition, or meeting the many trans men who are gay. The old theories about trans people being some kind of self-hating gays, or the accusations that they transitioned because they couldn’t live in the world as non-normatively gendered—implode when you meet the range of trans people out there, especially the ones who held out, who tried everything, who really didn’t want to be trans at all. Just as in the rest of the population, some trans people are gay or lesbian in addition to being trans. Their gender identity has little to do with their sexual orientation, but only to the degree that we all define our sexual orientations not just in terms of the gender we’re attracted to but in terms of the gender we are ourselves.

As a gender-y sort, it’s difficult to accept the need to transition. I’ve never had an easy time with my own gender—both as a feminist and as a person—and for those of us who struggle with our own genders, or who desperately hid the parts of ourselves that made our genders non-normative, trans people can be challenging. There are times I look at my wife happily filling out an F on a form only to think: if only mine were that easy. I’m the one these days who wants the O for Other, who prefers to leave a gender blank blank. Believe me it’s been one heck of a surprise, and a wake-up call, to find myself the more masculine woman in a same sex relationship after having been the tomboy in a heterosexual one. Allies have no real idea what it’s like to live in the world as a same sex couple; so many people see the strides that have been made in terms of all our civil rights and assume it’s all good. We know it’s not.

Often gay and lesbian people think they understand trans genders because they’ve experienced their own issues with gender and they’ve experienced discrimination, prejudice, and outright bigotry. But we don’t really know what it’s like to be trans; I feel safe in saying that I’ve probably met more trans people than most people, and I still don’t truly understand it, but I do know that it’s real, and deeply felt, and absolutely vital that trans people get to live in a gender that makes sense to them. We tend to think only trans people have a preferred pronoun—but most people get upset when they are misgendered by a stranger. That’s one way for all of us, as non-trans people, to see commonalities of experience.

Other than the idea that we know our allies by who else our enemies hate—the fact of it is that same sex attraction, like trans identities, are about gender: yours and the other person’s. There are trans people who are heterosexual after transition, or, like me and my partner, who looked heterosexual before transition. But it is likely that trans people will be judged to be LG or B at some point in their lives, depending on if they transition or when they do and who they date before and after the fact.