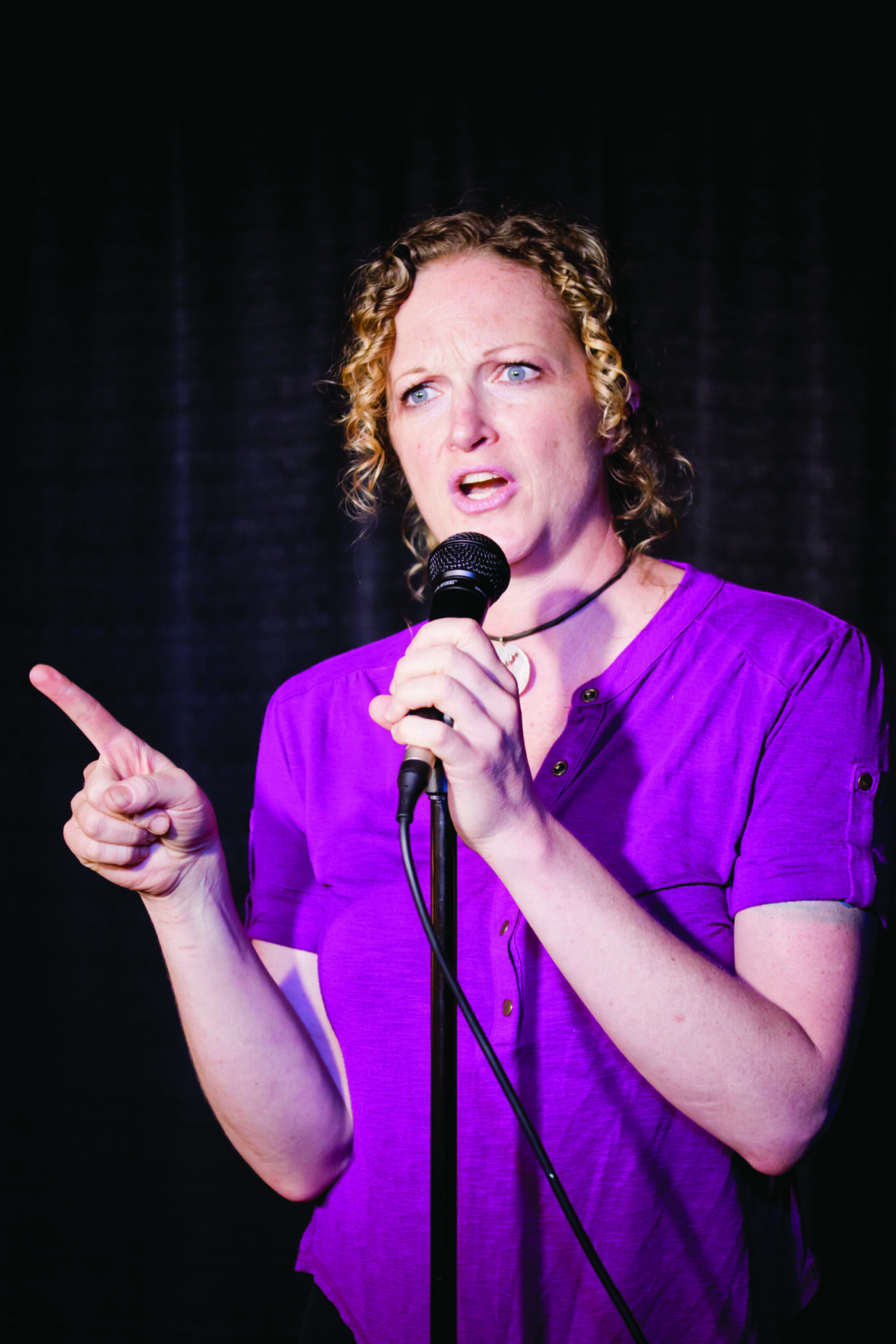 I am endlessly fascinated by humans. I have never been good with gender roles. I have a knack for seeing right through the bullshit, and I have an insatiable curiosity that drives me to do things a little on the outside of the norm. All of these things helped bring me to the stage.

From singing and dancing in plays since I was 8 to standing alone on a dark basement stage talking about boobs and making people laugh, I have found that laughter is such a powerful tool. It eases the stress and pain of everyday life. It opens up the door to hard conversa-tions. It has the power to make you think about the things most people are afraid to discuss. Making people laugh is my drug.

I have always enjoyed performing. I’d done musicals and plays throughout my life up until I had kids. When you have little ones, it’s very difficult to have the rigorous rehearsal and performance schedule required to put on a good show. It’s even harder when you become a single mom and have to juggle that and work three jobs to put food on the table and pay the bills. I gave up on theatre for a time. I joined a few different bands, but again, it was hard to commit to the schedules while taking care of my kids.

I taught myself how to play guitar so that I just needed myself to work around. I played for a while, started an open mic night at the Alchemy, which I ran for about three years. In that time I also started my own business, NessAlla Kombucha. As I was slowly becoming less and less de-pendant on other jobs to pay the bills, I had more free time to explore my artistic side.

In 2010 I was introduced to Monkey Business Institute with free tickets from Dylan Brogan who interviewed NessAlla for the Wisconsin Farm Report. I went to one show and knew these were the people I wanted to be around. I wanted to be on that stage doing improv, which was like watching brilliant magic unfold before my eyes. Not having much money, I scraped together what I could in order to start taking classes. It was an amazing time. NessAlla was growing and I found something I really loved that also worked with my schedule. With improv, there is nothing to memorize, only skills to hone and funnies to be had.

In 2011 I was accepted into the MBI troupe with two other people, Casem AbuLaghod and John Steeno. I had only a small amount of improv experience under my belt and suddenly a huge amount of stage time. It helped me realize that I have been a performer, in one way or another, for 30 years. I love the stage, I love the reactions, I love to perform—but for all of that I was super insecure about it. There were these people that had been doing improv for so long and are so good at it. The stress left me with a migraine that lasted for six weeks straight.

Eventually, I loosened up. I was still in classes and had to learn to get out of my head. Like any-thing, the more you do it, the easier and more naturally you can do it. Once that was conquered, I moved to stand-up comedy. I’d go to shows just to watch because the thought of actually doing it would send me into a real panic attack. I am not an anxious person. This comedy stuff was throwing me for a loop, but I loved the fact that something about the stage was making me so nervous and excited. It was something that mattered to me.

I did a few open mics, but eventually stopped going. The comedy community at the time was seriously male dominated. Not that everything I get involved in isn’t. I mean, c’mon, see how many professions you can name that aren’t. There were very few female comics, and the ones that were around didn’t bond like the guys seemed to. Not to mention comics of all kinds are naturally kind of awkward, myself included. I also never stuck around very consistently.

I decided that this year I wanted to focus on comedy again. I opened up my satchel of fucks to be given and noted its emptiness. Plus, the scene has changed and is a lot more welcoming. It feels like there are many new comics and they really want to be more inclusive. Which is great be-cause being a comic can be terrifying and very lonely.

Growing up I was always “one of the boys” until that fateful transition year of puberty. Then it was weird, never quite the same, and I hated that. Why couldn’t I still be one of the boys? I like girls, too. I also like boys. I like wearing pants and dresses. I like getting dirty and rowdy and tak-ing insane chances and I like to be treated like a queen. It’s made it tricky to hang with both boys and girls, frankly, but luckily now I have this empty satchel of fucks. I’ve reached a point in my life where I just have to be who I am. The more I do that, the more happy I am in my life and the easier it is for people to be open and accepting. All these things help with playing many different roles. It helps push the comedy limits and fuels my creative fire.

I plan on continuing to do stand-up and improv. I had a chance to headline La Bomba Water’s Rated Her Series and that was a blast of 20 solid minutes. Rated Her is an all female comedy and acoustic showcase. It’s a great show to be a part of as a female comic in town. I would like to be-come more involved in the comedy scene, doing more shows, hosting and maybe even starting my own show bi-monthly featuring a handful of comics and giving them a bit more time on stage. I feel like that sort of 10-minute slot is hard to find but important for comics to practice. Comedy is a part of our lives that is essential for not taking ourselves and our world so seriously, but also being able to hold a light up to things that need to be picked apart. We need it. We need each other, and goddamnit, we need to laugh.

You can catch Vanessa as a member of the Monkey Business Institute (www.monkeybusinessinstitute.com) and hosting the monthly Hyperbole stand-up show at The Fountain (122 State St.).