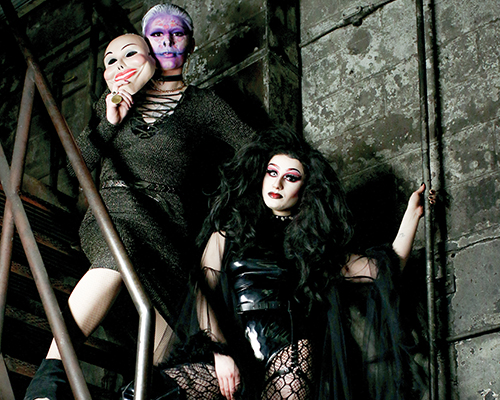 Tell us Who you are, and what’s your involvement with Hysteria?

Gretta Grimm-Deville and Garnet Grimm-Deville are Madison’s spookiest alternative drag duo, and the creators and hosts of Hysteria. Gretta has been doing drag for six years, and Garnet celebrated their one-year dragiversary in January.

What inspired you to create this particular show and why?

Garnet: We set out to create something that would stand out from other shows in Madison. We knew from the beginning that we didn’t want it to be just another show, but rather a fully immersive experience. Don’t get me wrong; standard drag shows are a total blast! But after a while, the repetition of it all can get a trifle dull. So we wanted to create a space where artists who exist autonomously from the world of drag could be celebrated alongside it, and integrated into it.

Another driving force behind Hysteria was to create a space which is not only accepting of alternative styles of drag and art, but also to represent minorities within the LGBTQ+ and performance communities. Unfortunately, there’s very little representation for AFAB (“assigned female at birth”) queens and performers, trans performers, drag kings, etc., despite their ceaseless efforts and undeniable talents. We wanted to carve out a space where those identites could finally be at the forefront.

Gretta: One other large part of our motivation was to give back to the Madison community. There have been a fair number of shows in the area that are organized with the intention of giving to a certain organization or charity, but we wanted to go a little further than a single show. We ask each performer to donate the tips that they are given by the audience members to our chosen charity or organization of the month.

What sets Hysteria apart from other drag shows in Madison?

Garnet: For each show, we recruit visual artists, as well as musicians, to add to the lineup so that there are various mediums of entertainment and talent to showcase. We also (with the help of the creative Jordyn Alft) have brought depth to the show with multimedia involvement (i.e. videos, countdowns, visual aid for drag numbers, etc.). Each show is also themed, which adds a creative and conceptual element to the advertising, the performances, and the costuming. It’s just an overall great place for weirdos!

Gretta: Each month we choose a Wisconsin-based LGBTQ+ organization, or an organization that supports the queer community in some way, to receive all of the tips that our performers are graciously given by the audience members. Thus far we have raised over $2,000 for groups like Trans Law Help Wisconsin, Diverse & Resilient, GSAFE, and the Social Justice Center.

Why do you think people should come see it? What have some of your favorite acts been so far?

Garnet: It’s inarguably a unique experience! And, as I said, it has a lot to offer aside from sick drag. I don’t know if I can pick a particular act as my favorite because they’ve all been stellar, but the March show was Myspace-themed, and everything about it was fantastic. Remember what it felt like to walk into Hot Topic in 2007? It was like that, but queerer.

Gretta: Hysteria has evolved through every single show. Even if the “vibe” of the show and the venue is not exactly what someone would gravitate toward normally, there will be an aspect of the show that will cater to you. Instead of having the normal bar experience while waiting for a show to start we have brought in some amazing local artists and a local band to add more of a complete experience to the night.

What are your plans for the future, with this show in particular and for yourself as a drag artist?

Garnet: Really, I think we just look forward to watching it grow and live up to its full potential as we continue to raise money for causes near and dear to us. It’s still a new show, but it’s gaining momentum, and the turnout has improved each time, which is really encouraging.

As an individual drag artist, I want to continue to raise awareness and provide opportunities for fellow AFAB, trans and non-binary performers who feel they’re underrepresented or treated unfairly in the scene. Then, eventually, when I have more than one year of experience under my belt, I plan to audition for a drag competition (NOT Drag Race) and will hopefully go on to compete and grow my platform through that.

Gretta: Each show has brought a brand new energy and fulfillment for my art that the drag community has not given to me in quite a while. We have all had a ton of fun collaborating with local performers and artists and I want to continue to bring in fresh takes on our themes and see what they bring to the stage!

For myself? I have been trying to delve a little deeper into my talents and take on more sewing projects. I have loved to sew since college and will continue to do some projects when there is time. n

Shows are held on the first Thursday of each month.