Advocate for the Aging 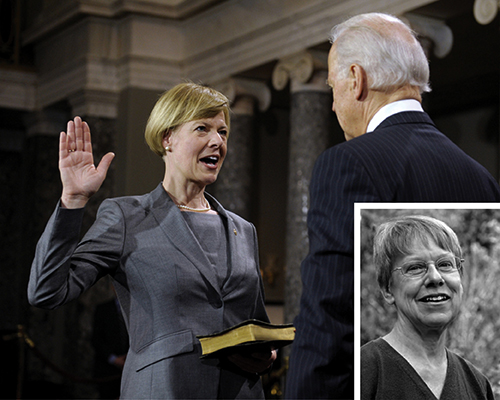 What is the significance for Wisconsin’s LGBTQ elders in Tammy Baldwin’s appointment to the Senate Special Committee on Aging? I emailed Tammy and her staff for answers to a few questions below.

What issues are likely to come up for the committee?

The committee will work on issues important to seniors in Wisconsin and throughout the country. We will focus on preserving and protecting Medicare for current and future generations, bolstering economic and retirement security for older Americans, and protecting seniors from fraud and abuse. We also will examine major health issues that harm seniors, including Alzheimer’s disease, and study sustainable ways to finance long-term care.

What do this appointment and the upcoming issues mean for aging in Wisconsin, in general?

This appointment means that Wisconsin’s seniors will have a strong voice fighting for them on a committee dedicated to protecting their interests. My appointment is especially important for our state because of who just left the committee. For six years, my predecessor, Senator Herb Kohl, chaired the Aging Committee. During his time as chairman and 24 years in the Senate, Senator Kohl was a steadfast champion for Wisconsin’s seniors. I look forward to carrying on his work, as well as pursuing new initiatives to ensure Wisconsin seniors have quality, affordable health care; retirement security; and the ability to fully enjoy their golden years.

Does this committee have influence re: the new amendment to the Older Americans Act (OAA) designating LGBT elders (mature adults) as a vulnerable population?

Did the amendment to the Older Americans Act, which includes the LGBT population as a vulnerable population, pass in 2012?

The OAA does NOT include specific protections for LGBT Americans—that’s what we’re endeavoring to do by amending it during the reauthorization process. (ed. note – The amendment, called the LGBT Elder Americans Act, was introduced in late 2012 by Sen. Michael Bennet, but has not yet been officially added to the OAA and is awaiting action by the current session of Congress.)

Has the Older Americans Act been passed in the current 112th Congress?

In the 112th Congress, comprehensive OAA reauthorization legislation was introduced, which would have extended the authorization of appropriations for most OAA programs through fiscal year 2017 and would’ve made various amendments to existing OAA authorities. It did not pass. Similar legislation is expected to be introduced soon.

If we are able to amend the OAA reauthorization in the 113th to include LGBT aging individuals, would funding be available for community programs like OutReach?

We’re not as clear about how the funds would be made available, but imagine if a State Unit on Aging under a reauthorized OAA has a mandate to target LGBT older adults, perhaps it could do that by funding programming aimed at LGBT older adults through an LGBT center.

Is it possible that some federal funding from the Older Americans Act could funnel down through the Area Agency on Aging of Dane County to assist the advocacy work and programming of the LGBT Community Center in Madison benefitting LGBT elders?

There are several examples of LGBT aging programs receiving direct or indirect funding through the federal Administration on Aging via their local Area Agency on Aging.

How have SAGE affiliates benefited from funding from the Older Americans Act?

SAGE has affiliates with congregate meal programs that are funded through their local Area Agencies on Aging. SAGE has a potential affiliate in the Western Suburbs of Chicago that is housed in an AAA, and they fund a staff person. Although his position is covered by a grant, the AAA still has expenses related to the program.

NOTE: A group of seniors called the LGBT Senior Alliance Advisory Committee (SAAC) is spearheading an initiative through the OutReach LGBT Community Center in Madison to become a SAGE affiliate. OutReach will need a continual source of funding in order to support the programming and services needed to support our LGBT older adults.

Caroline Werner has a Master’s degree in Social Work and was a case manager working with seniors in Dane County before retiring. Now she is the Volunteer Senior Program Coordinator for OutReach.