Behind the Scenes Builder 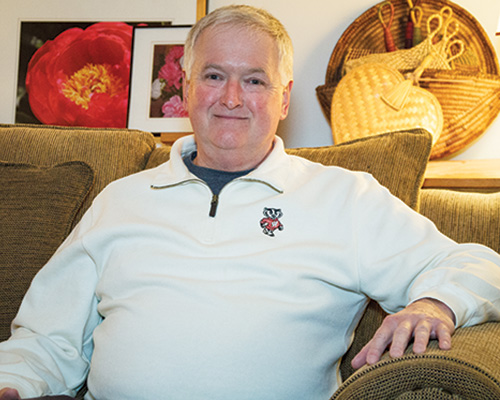 Roger Hansen is the OutReach LGBT Community Center Board President. This “junior senior,” as he prefers to be called, is a mover and shaker for our community. Roger’s at OutReach so often that anyone who didn’t know better would think he’s staff.

He works closely with Brian Poncé, Publications Director. Since my office is in the same room with Brian, I see Roger a lot: he’s often talking to Steve Starkey, our Executive Director, or Angie Rehling, Program Director, and to our volunteers. Sometimes the guy can be a “pest,” but he’s a well-intentioned one—and he keeps us on our toes and energizes the entire agency. Roger went so far as to pledge to match the first $1,500 in donations made to the center during the Big Share in March. His energy and commitment to the community leads me to want everyone to know about what he does:

Roger grew up on a farm outside of New Holstein, Wisconsin. He knew his sexual orientation by age 10 or 11 and also knew not to disclose what he was thinking to anyone, especially in a rural environment in the 1960s. Roger graduated from high school in ‘71. He attended the UW Oshkosh and received a BS in Zoology in ‘76. He did not come out in either high school or college.

So, what happened after college?  I went to work in the pharmaceutical industry. I had several different positions in sales and marketing. I worked for the same company for 31 years.

When did you come out?  I came out as a gay man when I was 31. I came out with a group in Iowa City and worked on a coming out project there. I had a long-term relationship at one point in my life.

How long have you been active with OutReach?  For about 14 years now.

How did you get involved? When I came to Madison, I began volunteering under former Program Director Harry Straetz. I told Harry about my experience in Iowa City and he put me on the Speakers’ Bureau, where I’m still active. I asked to work with coming out support groups as well, so I began by co-facilitating a gay men’s group.

What motivated you to get involved with everything you do now at OutReach?  I saw the need to work to improve the lives of MY people. Basically, what motivated me was they wanted me to get more involved and asked me to be on the Board, and I said yes. Once I was involved with the Board, I realized that the number one thing was to raise funds and improve our financial status. I’ve been working with OutReach’s The Directory for four years. In that time, the ad revenue has tripled. I work with the Executive Director to increase OutReach’s funding. I track the donations and maintain the donor records, working with Steve and Barb Kneer, our bookkeeper. In my years on the Board, I’ve served as the Treasurer, Vice President and now President.

As a senior, what do you see is important for OutReach to be doing?  I support the senior programs and the social activities. Everyone who knows me knows that I support OutReach on all fronts. I get excited about everything happening at OutReach and all the people we serve—programs for young adults; helping transgender people get equal rights with the rest of us; and supporting Latino and African American LGBT youth and families. The work of OutReach is important on all fronts.

What is your goal for OutReach?  My goal is for OutReach to grow and thrive on the broad front. We managed to pay down the debt taken on eight years ago. We’ve added more programs. We took on the Pride Parade last year. My goal is to continue to grow the organization while improving our financial stability.

CAROLINE WERNER has a Master’s Degree in Social Work. She did case management with Dane County seniors before retiring. Now she is an LGBT Senior Advocate for the OutReach LGBT Community Center.