Bringing Their Whole Self to Every Game 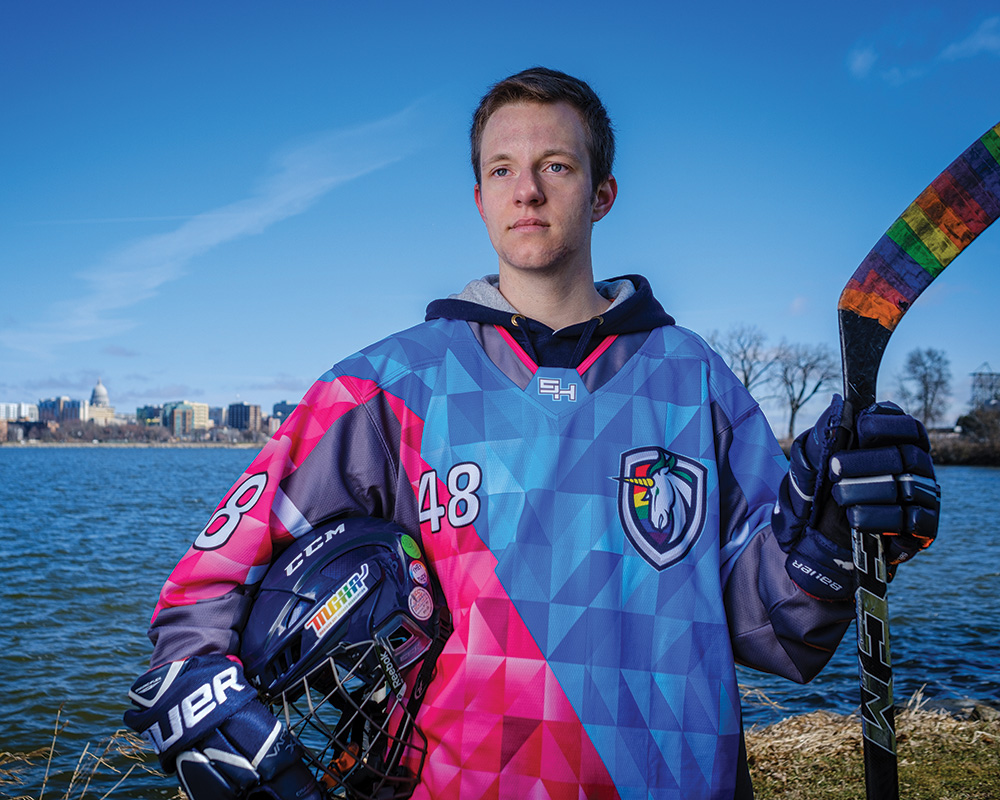 My gender identity shouldn’t matter when I tell people I’m a hockey player, but so often in sports, it becomes the only thing that matters. People fixate on an athlete’s genitals and fail to see the athlete as a whole person who just wants to play the game they love. USA hockey may have a trans-inclusive policy on the books, but players are still required to select between the two binary genders when registering. How do you pick when both feel like a lie?

As a nonbinary transgender athlete, sports can be a difficult setting. In a sport like hockey, “difficult” can easily morph into a heap of conflicting emotions. The gendered nature of the sport often leads to me feeling like an unwelcome imposter wherever I play.

When I play with men, I pull my gear on rapidly, shoving down fear that one of them may notice there is no bulge in my underwear. The likelihood that I mention my pronouns, much less enforce them, is miniscule at best. I spend those games trying to reassure myself that I belong. Your voice is low enough to blend in. That stubble coating your chin will quell any suspicions. Cis people don’t question others’ assumed cis-ness unless given good reason.

When I play with women, my trans-ness shoves itself to the forefront, demanding it be noticed and addressed. As I grow more comfortable in my body, I grow less comfortable among the teammates I am happiest playing with. Walking into rink after rink, my anxiety treads a well-worn path, summoning my equally well-worn defensive mantra to the surface. ​You’ve met some of these people before. They want you here. You shaved last night. No one will scrutinize your chest under this baggy hoodie. The other team isn’t going to question your hormone levels on sight. Just play the damn game.

When I came out in college and began contemplating medical transition, I also began wondering how such steps would impact hockey. The spring before I came out, I had stepped into a captain role on my college team. I spent that summer with a D3 girls hockey program, practicing among some of the most stereotypical cisgender girls I’d met to date in Minnesota. It was over this summer that I began to unpack and analyze my unhappiness and discomfort. I bought my first binder. I let my housemate buzz my hair. I googled “top surgery” for the first time.

I didn’t want to jeopardize the joy I found in hockey, nor did I want to let my team down, but fighting tears or rage every time I was reminded of what lay beneath my clothing wasn’t a sustainable way to live. I needed to act.

Fast forward a year and a half, and a very different person arrived in Madison, WI. I was finally seeing a body I thought I could love in the mirror, and my confidence had grown along with muscle and facial hair. But in graduating college, I left behind a team that had accepted me as me​ without a care for how I looked or sounded, and for the first time in recent memory, I didn’t have a place to play hockey. I spent a lonely summer coaxing myself into the gym and googling ice rinks around Madison, waiting for fall and the chance to join a league a friend from college had told me about.

The MGHA has changed my entire perspective on Madison. Immersing myself into a community of passionate and welcoming people has given me reason to begin thinking of Madison as a home. I’ve found people who, even after only a single season knowing them, I think could be friends for life. Playing hockey here, I don’t feel the old urge to tailor my underwear selections or color of stick tape based on how accepting the league seems to be. Here, there is no question. My teammates would be disappointed if I ​didn’t ​bring my whole self to every game.

Hockey has always brought me joy, but with the MGHA, I get that and so much more. I’m vocal on the ice, communicating with my teammates in earshot of the ref. I don’t rush through changing in the locker room; if anything, I linger, relishing a feeling of comfort I’ve so rarely felt before in locker room settings. It isn’t unusual for me to be among the last to leave as the rink staff shut the lights off around us.

MGHA hockey means a place where I can shed the usual cloak of trepidation I feel walking into a hockey rink. I know that there, I’ll see people who know that I am transgender who simply file that fact away in the same file as my wild-patterened shorts—as a fact about me that bears knowing if only so they can support me when the world would beat me down.

Ed. Note: We are happy to publish the Madison Gay Hockey Association’s selected essay each year for their league-run essay campaign. Any other LGBTQ sports organization (or similar) that wishes to publish essays or testimonials from their league members should contact Our Lives.