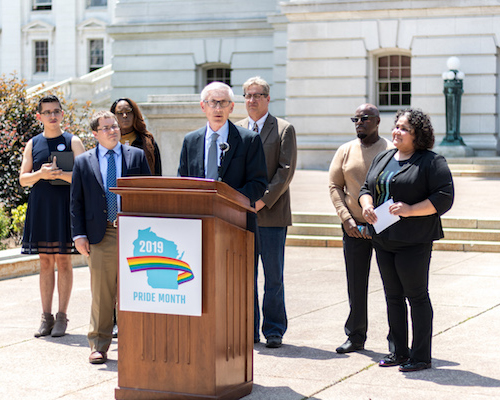 On a warm, sunny Monday in June, Gov. Tony Evers delivered the first-ever official LGBTQ Pride Month proclamation at the Wisconsin State Capitol. He was joined by members of the LGBT Caucus and prominent LGBTQ advocates who helped make sure the occasion was properly marked.

With the rainbow flag overhead, Evers read the statement to an enthusiastic crowd and local media.

“There’s still much to be done to make sure LGBTQ people and families are treated equitably and with respect,” he said. “The flag represents that Wisconsin is, unequivocally, a place that is and should be welcoming to all.”

State Rep. JoCasta Zamarripa opened the event with a heartfelt statement about her own journey to Pride. The first bisexual person of color elected to the state legislature, she noted that being her full authentic self in public wasn’t something she initially ever thought would be possible for her.

“I am not afraid to be out and proud anymore,” Zamarripa said.

“We’ve lost five women in June alone,” she noted. “Every one of them was someone’s rock, someone’s star…We must uplift trans women. Read their stories. Put a face with the name.”

She then led a call-and-response recitation of the names of every known trans woman of color killed so far in 2019—a list that now stands at at least 10.

“Pride isn’t just about happiness and celebrating,” said Sergio Dominguez, also speaking at the event. “It’s about sadness, grief, and anger—and standing up to say enough is enough. We need allies from all walks of life to take a stand.”

State Rep. Mark Spreitzer related his own personal history of coming out and being amazed by the progress that’s been made in such a short time frame.

“If you had told me 14 years ago that I would be standing here, next to the governor, under the Pride flag flying at the Capitol, I would have never believed you,” he said.

Spreitzer is the lead sponsor on a slate of bills called the Equality Agenda, now introduced in the Legislature with bi-partisan support for the first time. It includes six bills that will ban conversion therapy, prohibit discrimination on the basis of a person’s gender identity or expression, eliminate the gay and trans “panic” defense, create a transgender equality task force, and update Wisconsin’s statutes and constitution to recognize marriage equality.

“We’ve made incredible progress for LGBTQ people in just the five years I’ve been in the Assembly,” said Spreitzer. “But for all the progress we’ve made, and for every lucky person like me, there’s a kid out there who doesn’t have that support. There are adults who grew up in a less accepting time or place, or who still lack access to the support they need.”

Flagpoles across Madison were extra fabulous for the month of June, with several area companies joining the City of Madison and the Wisconsin State Capitol in raising the rainbow Pride flag to show support for LGBTQ rights.

Gov. Tony Evers on June 7 ordered the Pride flag flown on one of the capitol flagpoles. “Publicly displaying the Rainbow Pride Flag sends a clear and unequivocal message that Wisconsin is a welcoming and inclusive place where everyone can live without fear of persecution, judgment, or discrimination,” Evers said in an executive order.

Meanwhile, Mayor Satya Rhodes-Conway and other city leaders celebrated Pride month by having the rainbow flag raised in front of both the City-County and Municipal Buildings, the latter of which was also lit in rainbow colors for the month. “We still have work to do, and that’s why it is so important to send a visible signal that Madison is a welcoming community, and the city is an inclusive employer,” Rhodes-Conway said. The Wisconsin State Office Building in Madison and the Dept. of Children and Families also raised the Pride flag outside their respective offices in mid-June.

Many area businesses also joined in the Pride month celebrations with flag-raisings and, in some cases, company-wide commemoration events. American Family Insurance raised the rainbow flag at their corporate headquarters in Madison and featured speeches from Rhodes-Conway as well as the head of the LGBT Business Resource Group and the VP of Human Relations. Other local businesses to hoist the Pride flag in June included UW Health, Meriter, Summit Credit Union, and CUNA Mutual Group.