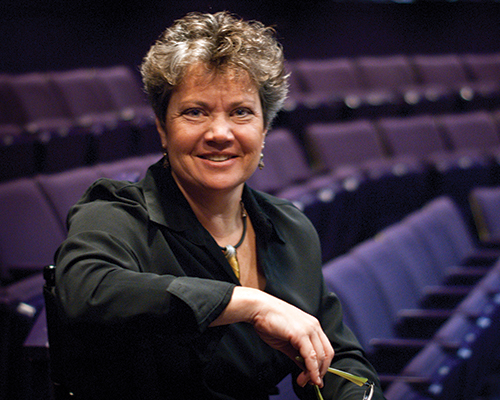 My freshman year of high school, I went to New York for the first time on a bus trip with the drama club. I saw the original production of Jesus Christ Superstar and was blown away. It was so compelling, so mind-blowing, so cool! It was like the first taste of something you are forever craving afterward.

In so many ways, being involved in theater in high school really shaped and saved me. I was pretty much a tomboy and rode a motorcycle. I remember getting to school early so other kids wouldn’t see me with my helmet on and razz me about it. I wasn’t cool, or popular, or interested in dating (though I never thought about why!).

The drama class was where everyone was welcome, and where I felt I could really be myself. We were all into the “touchy-feely” kind of drama exercises, and our drama teacher was especially interested in avant-garde theater. There were no desks in the classroom, nothing traditional at all. It was very much a feeling of belonging to a community of people who were like me. My first acting role was in ninth grade as Edward Emerson in The Night Thoreau Spent in Jail. The boys were really miffed that a girl had gotten the part instead of them. Needless to say, playing a boy’s part was not hard for me!

When I was a junior in high school, I had to choose between playing varsity softball and being involved in the school plays. I chose the latter, and I really think that set me on my career course, even though I never thought I could make a living in the arts.

Living in the Washington, D.C., area in the early ‘70s was a great time to be in the arts. I remember in high school seeing everything from traditional theater at the Kennedy Center to avant-garde theater in a little basement black-box space. It really exposed me to a wide variety of styles and material.

I always loved working backstage and assisting the directors. I was on every crew there was and spent all my after-school and Saturday hours in the auditorium—painting scenery, building sets, hanging lights, and taking notes for the director at rehearsals. Even though I felt comfortable around the drama gang, I was pretty insecure when it came to being onstage. In college, I was able to get work-study jobs in the theater department as a stage carpenter and electrician.

I didn’t plan on majoring in theater in college. I thought I would be a translator and majored in Russian Studies. But I kept taking theater courses, and soon I had enough to double-major. In the summers I worked for an outdoor theater in Richmond, Virginia. I was a true techie—proudly wore a tool belt, overalls covered in paint, and work boots. I loved to be around the people and the art, and I loved being perched up high in the back of the theater running the followspot for the musicals. Again, I found family with my theater friends. And now I was even getting paid to do all this cool stuff!

The director of the summer theater was openly gay, and he and I had many long talks about “being yourself.” He knew long before I did where my orientation was—and so did everyone else. Finally, at 22, I came out. Not through a relationship, but just through reflection and realization. Looking back at my life to that point, so many things made sense. It also was true that there was a general sense of acceptance of being gay in the theater community. This helped a lot.

After college I worked for a touring educational theater company called Theatre IV, a company run by some alumni of my college. We did a lot of original material that toured to schools and rural communities in Virginia and West Virginia; theme-based plays and contemporary adaptations of well-known stories, like “The Ugly Duckling,” about being or feeling different. I was the stage and road manager and coordinated all the logistics. We traveled in a van and went from sunrise to late at night. It was a great experience, and I was struck by how engaged the kids were and how much the messages of the plays impacted them. I think about that experience a lot now that I’m running Children’s Theater of Madison. I know my commitment to theater as an educational tool is directly related to my work with Theatre IV.

A year after college, I went to grad school to get my MFA in directing. I really wanted to focus on the craft of being a director. After grad school I worked with a film company as a casting assistant, which led me to working at a TV station in Charlottesville, Va. It was there that I entered into my first “serious” relationship. My then-partner graduated from UVA and decided to come to the UW for her doctorate. I came up to visit and then moved here in February. From Virginia. In February. I had NO IDEA how cold it could be!

Shortly after moving here, I got involved with Madison Rep as a stage manager. I also started knocking on the door of American Players Theatre. It took about two years, but I finally got my foot in the door of APT and was hired as an Equity stage manager. I spent the next 17 years of my life out there, helping to build the company both literally and figuratively. In my tenure there, I went from stage manager to production manager to associate producer to associate artistic director. I was involved in the planning and building of bathrooms, dressing rooms, audience seating, the stage, and production facilities. I went around the country auditioning actors. I hired designers, directors, and technicians. I did a lot of different things over the years and still consider APT my artistic home. It was a tremendous experience and was instrumental in forming my artistic aesthetic, focusing on the power of clear, honest storytelling, and respecting the text. If there’s one thing I strive to achieve in every production it’s that the words are clear, well spoken, and integral to the telling of the story onstage. My years at APT solidified that core value.

I never seriously thought about running a children’s theater company. But when I heard that Children’s Theater of Madison was going to suspend its season in 2006 and potentially close, I got in touch with an APT board member who was also connected to CTM, and urged him to find a way to bring me on to direct A Christmas Carol. In September of 2006, CTM was resurrected (thanks to the philanthropic support of many Madisonians) and I produced and directed A Christmas Carol. It was a big success, and I got hired back in the spring to direct To Kill A Mockingbird, featuring Richard Ganoung as Atticus. It also did really well. CTM reorganized, formed a new board, and launched a search for a new producing artistic director. I applied and was hired.

I’ve been running CTM for six years now, and it has been more rewarding than I ever thought possible. I feel like I’ve really come full circle. Back to my roots, I guess, by providing a place for young people to find themselves, to express themselves, and to belong. A place to do high-quality theater productions and exceptional educational programs. A place to fulfill the mission to “create vibrant theater experiences that engage, educate, and inspire young people and their communities.” I have now seen kids grow up from being shorter than me to towering above me, from being shy and awkward to being “loud and proud.” I’ve seen talents and self-confidence grow right before my eyes. I’ve been told that I’ve been instrumental in their lives. And I believe I’ve done this by creating respectful, professional, creative, fun environments for young people to learn about and participate in high-quality theater. I’m proud of the mentorship aspect of CTM—where adult actors can role model for younger actors; and young actors can demonstrate for adults how to be free of self-editing and joyfully let their imagination lead the way.

I feel like what I do makes a huge difference in our community. Not only does CTM do great theater and offer outstanding educational programs, but also it really does nurture the next generation of innovators, creators, risk-takers, and leaders. It may sound cliché to say “stage skills are life skills,” but they really are. Art, and for me theater especially, breaks open barriers, welcomes differences, and celebrates uniqueness. What a great way to make a living…to make a life.

Roseann lives on the near-west side with her partner, Bridget Birdsall.