I have just finished my first season in the MGHA. What does Gay Hockey mean to me? I don’t know that I have a short answer for that. I am not even sure I would want to have a short answer. For me it is a place where I am comfortable. It is inclusion without having to hide who I am. It was meeting wonderful people who are also out and share this passion for hockey with me. It has been a relighting of my passion, and understanding my dream of playing hockey my entire life is far from dead.

It was a remarkable confluence of events that have brought me here. I am not shy about sharing how I found MGHA. For me finding MGHA was a miracle. I will always be grateful for my opportunity to play here.

As I began my transition from a physical standpoint I understood that I needed to lose weight to maintain my health. I began working out intensively. As I finished my workout one hot summer day, I had some water and jumped on Facebook. There was an ad for MGHA. I had already lost about sixty pounds. I needed the proverbial “carrot.” There it was. I clicked on the ad immediately. What I believe MGHA stands for is exactly what I needed out of hockey all along.

If there was a drawback it was I found the ad in July. I wanted to play so bad that it made those summer days drag by. My excitement started building, and I began my normal hockey ritual of starting to skate late July or early August. It dawned on me that I hadn’t been on skates in roughly 20 years. Wow, where had the time gone? Skating in itself was amazing to me. I started buying gear again. This was really going to happen. I was coming back to hockey as a player. There was not going to be the bad feelings I always had back in high school. I would have new teammates that accept who I am from the very first day. Can this really be happening? I found out the answer was “yes.” My counselor said that this was going to be a good “bridge activity” for me. I could not wait for the season to start.

Anyone who has watched me play knows I am a player of considerable experience. I have been playing since I was six or seven years old, which is ironically about the same time I started contemplating my gender identity. What I knew to be true was: if I came out as transgender in the late 1970s, or early ‘80s I would have been excluded early on. What I also knew to be true is I had some talent as a player. I also had a passion for playing hockey. So, the choice was clear for me at that time. It was to hide who I am on the inside. By the time I finished my senior year of high school I was done with playing the game. I left multiple junior A and college offers “on the table.” It wasn’t because I didn’t believe I could play that kind of hockey. I knew I could play. I was afraid of being discovered. In those days, the dressing rooms were a house of horrors to me. Homophobia, and to a lesser degree transphobia, were rampant. I thought it best to walk away.

I battled depression, and anxiety as part of gender dysphoria. I put on a lot of weight while pretending to be who I wasn’t. I didn’t know or understand that I wasn’t done playing quite yet. It was an odyssey to get here, but worth every second.

What does gay hockey mean to me? It is inclusion, comfort, and coming full circle in my life, and in hockey. As I drove to the rink for the first skills clinic, I thought about everything. I thought about how, on the heels of my divorce, I begged to be able to “come home” to my ex-wife. I thought about everything else that had hurt me in life. As I pulled up to the Hartmeyer Ice Arena every bit of emotion I had came out. In a moment of clarity and happy tears I said to myself, “Ashleigh, you’re finally home.”

What gay hockey means to me: It’s community, family, friends, and of course hockey. Most of all this is home for me. Gay hockey has helped me be complete and happy. Now, I believe I am truly living authentically. 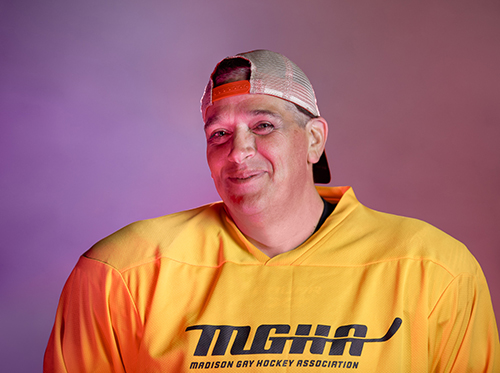