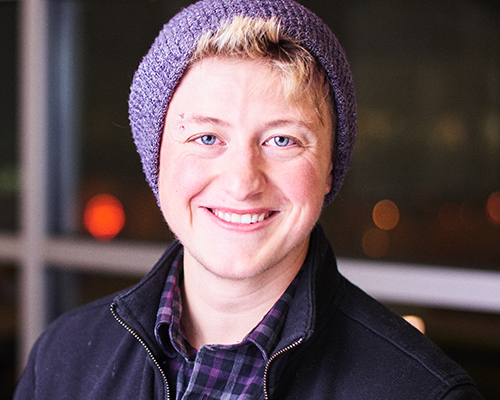 All my life there have been three things that I’ve been particularly bad at: coming out on large public platforms, taking nice pictures, and talking openly and honestly about myself.

I ask for your patience as I attempt to do all three. I am queer. I am trans. And I am proud. As for point two, I am unfortunately writing this in advance of the photo shoot, which means I have absolutely no idea how the picture will turn out. Here’s hoping it looks great! Now to point three….

I remember, growing up, having this constant and persistent feeling of unhappiness. It started as that feeling of being different than everybody else around and not understanding why. Of feeling alone no matter how many other people were around.

As I started to understand my queer/trans identities I could feel my confusion begin to fade, only to be replaced with fear, doubt, and shame. And while the isolation became much clearer, it also became much stronger. I could never find the strength to tell the people closest to me about who I was. I was too afraid. So even when surrounded by people who I knew cared about me, I couldn’t feel anything but miserable and alone. I was consumed by self-hatred, and I had no hope that things would ever get better.

But then a friend told me about a group they participated in. It was some LGBT teen support group at Briarpatch Youth Services. It sounded okay, but not really my thing. After a number of a weeks and a lot of hard convincing, I decided to give it a try. It changed everything.

I could talk for ages about the ways that Teens Like Us (TLU) not only changed, but saved, my life. When I was at TLU, I was all of a sudden in this place with supportive and successful LGBT adults who fostered an environment where I started to feel like I could maybe be okay someday. It gave me the will and desire to keep trying, the safety and support I needed to understand that I was not alone in this world, and a new sense of empowerment from being surrounded by people like me, even before I truly understood who I was.

It was the education I never knew I needed about my mind, my body, and the world around me. I could talk forever about how TLU started me on my journey of recovery (one that I will be traveling for quite some time). Instead, I will focus on the purpose and drive TLU gave me that would forever shape my life direction.

TLU opened my eyes to the world of helping others. It allowed me to see the powerful effects that non-profit community supports can have on a person. I finally felt this overwhelming sense of purpose, and I knew that I wanted to spend the rest of my life giving to others the way that TLU and Briarpatch gave to me. I wanted to be the support and inspiration that I had needed at my worst.

This drove me to go on to college so that I could learn how to help other people get to where they want to be. It pushed me to pursue and accept positions where I could make a difference in the lives of people who needed that help. Whether it was creating programming at the UWGB Pride Center, facilitating a transgender support group, or advocating for the rights and safety for those at the local domestic violence shelter, I could always feel that push to keep giving.

Now back in Madison I’ve carried on that drive and desire to make change in other people’s lives. After so many years and after so much change, I’ve been given the chance to return to that place where it all started, facilitating that same group that changed my life those years ago. It’s in a different space, and focuses on a whole new generation of obstacles, but it’s still that same Teens Like Us.

I am honored to be back and to have the chance to work with these youth to create that same supportive environment, to help them navigate what can often be a long and confusing journey, and to guide them in building the skills that will allow them to thrive in the world. It means the world to me that I can sit in front of these teens and let them see—help them believe—that it is possible to survive.

Each week I look at these resilient kids, and I can’t help but to think about the ways that they will go out and impact the world. I know that Teens Like Us will continue to change and inspire so many lives, just the way it did mine. And it gives me hope that I can be a part of that change.