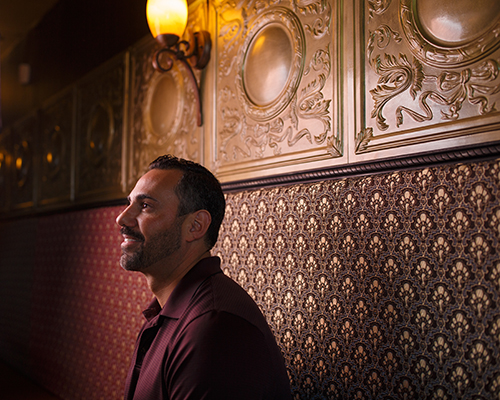 I have been no stranger to chasing the American dream. My father and mother were both immigrants from Lebanon with entrepreneurial spirits. My memories of my father helping the neighborhood customers at his store, the Park Avenue Grocery in Janesville, begin around the age of four. Business was always a family endeavor. My parents were always proud of the culture from which they had come, while also embracing the America that they were now a part of.

Most of all I remember the smells and the tastes of my mother’s kitchen. The culinary experience is a large part of Lebanese culture. If I jump ahead in my story it really should not have been a big surprise that my brother and I would decide to open a restaurant that would expose the community to the taste of Lebanon.

I was born in Janesville, the youngest of four. I remember my mother always cooking. She would take a few quality ingredients and make them into a masterpiece. While my mother spent most of her time in the kitchen, my father was busy dreaming and building a life for his family.

In 1978 flames incinerated our apartment and my father was burned from head to toe. Sometimes we learn more from how people deal with tragedy than from the tragedy itself. My father not only recovered, he returned to his dreams with a vengeance.

Part of those dreams involved my parents’ wish that their family learn about their roots, and so I went to live in Lebanon at the age of seven. We’d just begun to settle into life there, making friends, and learning to read and write—and then, in 1982, civil war broke out.

A bomb erupted in the front of the home that I was living in and shrapnel pierced my body. I was sent to a makeshift hospital and left for dead for over a week. Faith, prayer, and hope prevailed as I was relocated to a better hospital, one equipped to handle a trauma of this magnitude. Eventually, I recovered and my family and I returned home to America. Looking back on the events of my life now, I can’t help but draw the parallel lines between that of my father’s life and my own. If he was able to persevere through his tragedy, then so could I. 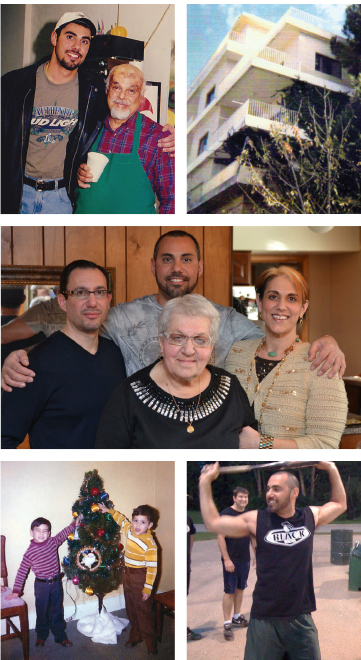 Even though I am Lebanese I have always thought of myself as American. Being that I was born in this country I have never had to be concerned about immigration or being deported. However, with the new political climate, I worry about being judged just on being Middle Eastern and not on my character.

My heritage has never stopped my entrepreneurial spirit, though, but rather helped strengthen it. I watched as my father pressed forward, opening several small businesses—everything from a farm operator to a real estate owner. I would witness his business dealings and help where I could while also finishing my education. After graduation, having the same drive as my father, it was clear that I was going to venture out into some type of business. It was at that time that my family decided to purchase a restaurant in Madison.

Now would be a good time to digress: It is a right of passage to grow up, get married, and have children. Lebanese people expect that once you are of age and have begun a career that you will fall in line with the custom of raising a family of your own. One-by-one, all of my siblings were buying rings, setting dates, and planning families. The pressure was on and rising.

“When will you be married and have kids of your own?” was a question that would regularly hit my ears. With me not being out to anyone in my family yet, relocating to Madison, a bigger city, to run a restaurant could have just been the escape that I was looking for.

The restaurant was an existing steak house when we purchased it. I became married to the business. I worked there night and day and would think about it when I was not there. We would constantly work to reinvent the business, too, keeping what worked and redoing what didn’t. The restaurant went through three major changes before finally settling into what was the best fit: the food and ambience of Lebanon.

Even with all of the successes, though, there was still something missing. I never felt that I was being true to myself or that I could truly be who I was.

After living in Madison for seven years, I made the decision that it was time to come out to my friends and, most of all, my family. As you can imagine, to a family so rooted in culture, there are three words that do not work well together: gay, Christian, and Lebanese. When I was around 25 years old, I went on vacation to Puerto Vallarta, Mexico. It was in this city that I went to my first gay bar. I was nervous, excited, and scared. I had been so uncomfortable in my skin for so long that seeing other guys like me was very overwhelming. When I returned home wearing some silver jewelry that I had purchased, my sister made the comment to me, “That’s the kind of jewelry gay people wear.”

That said, I decided to tell my sister the truth: “I am gay!” That was just the beginning. Within a short period I had come out to my siblings and my mother. My coming out was not welcome news, but regardless how my family initially responded I knew there was, and is, a lot of love in my family. Their love for me never wavered. 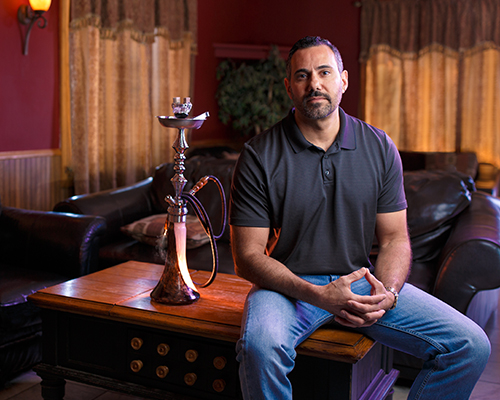 Twenty-three years, countless tears, moments of forgiveness, and many loving memories later, the Mediterranean Hookah Lounge & Café is owned solely by my brother Simon and me with the blessing of my family. It was not an easy road to get to where I am now, either professionally or personally. When I stand behind the bar and I look at people smiling and sharing a moment in a place that we have created, whether sharing a hookah or eating a meal that we have prepared, I can’t help but think that somehow they are connecting with my culture, my journey, and me.

I have learned that if you take the good of where you come from, look ahead with a dream while keeping centered in your faith, anything is possible.