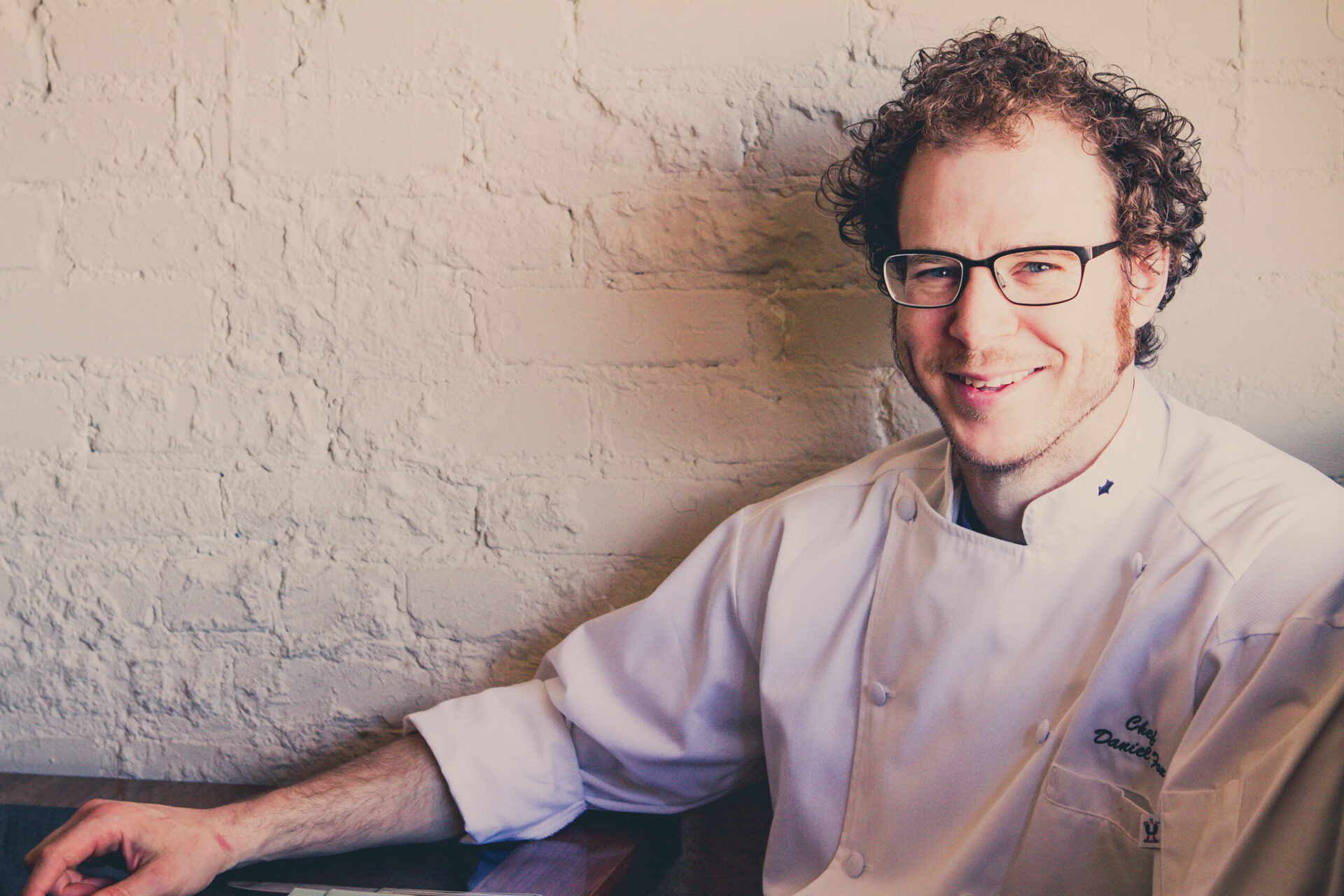 Twenty plus years after climbing the stairs to L’Etoile I’ve never second guessed my decision to join a kitchen that was quietly growing and forever changing the face of Madison’s food community. I went into this profession naïvely, wanting to spend my time doing something I felt passionate about. I had not realized that I had chosen a lifestyle as much as I had chosen a new profession.

I found this infectious passion in Odessa Piper, who founded L’Etoile in 1976 and was starting a quiet revolution along with her west coast equivalent Alice Waters. Creating restaurants that supported and stressed the importance of buying local, organic, and sustainably while educating the dining community on the importance of this practice would soon become known as “farm-to-table.” It was idealistic and unique in the ‘70s when this revolution was starting to gain momentum. Their goal was to make it commonplace for restaurants to offer a menu featuring the bounty of its region’s farming community.

Opening Harvest, my passion never changed. Buying local and creating an ever-changing menu became our religion, and it’s what has earned us several James Beard Foundation nods as well as being named one of the Top 10 Farm-to-Table restaurants in the U.S. Harvest will be celebrating our 16th year of being part of Madison’s restaurant community and our goal remains the same, to teach and encourage our chefs the importance of sustainable practices and carry that vision forward to their next step in this ever-evolving profession. Seeing the need for a more casual style restaurant, too, I opened The Old Fashioned Tavern & Restaurant to showcase Wisconsin farmers and producers in a relaxed supper club environment.

Odessa built the foundation for Madison’s food community that continues to strive for and grow the importance of a sustainable food system. Those who worked in her kitchen went on to create their own niches, like Jane and Wave of The Dining Room at 209 Main, Brian and Angela’s Deb & Lola’s, and Eric Rupert’s Opera House. Odessa’s last Executive Chef Tory Miller took his relentless passion for L’Etoile’s vision and moved it into its 40th year, earning a Best Chef of the Midwest from the James Beard Foundation in 2012 and nominated this year for Outstanding Chef. This all happened while he was creating new restaurant concepts and opening Graze, Sujeo and Estrellón.

Madison’s restaurant scene is diverse and rich with talent and has the distinction of being one of the top culinary destinations in the Midwest. Madison restaurants are known for creating innovative cuisine and are also driven by friendly competition with one another. On any given day, the decision to dine out can be overwhelming while one tries to land on a final destination.

Jonny Hunter of the Underground Food Collective (Forequarter, Underground Butcher, Underground Meats, Underground Catering and soon to open Middlewest) has been transforming our local food scene like no other over the past 10 years. A true renaissance man, Jonny has garnered national attention and is inspiring all facets of our food system through his Underground ventures. Inspired by his public affairs degree, Hunter is generous about sharing what he has learned. In 2013 he attracted national press when he crowd-funded an open-source guide to meat-curing safety standards to make life easier for other aspiring artisan meat producers. He founded Bike the Barns, an annual fundraiser that benefits FairShares’ Partner Shares, a program that helps low-income families buy fresh, locally grown vegetables. He also helped launch the Madison Area Chefs Network (MACN) along with Tory Miller and created the idea for Madison’s Annual YumYum Fest.

Bologna, Italy native Francesco Mangano earned the love of his customers and fellow chefs long before the Beard Foundation gave him notice. He has offered an elevated Italian country-fare at Osteria Papavero, opened in 2006, like his grandmother served at her restaurant in Bologna. Francesco’s talent prevails in his attention to detail, authenticity, and his craft of charcuterie that is not to be missed during your visit.

Chicago native Chef Daniel Fox is the Owner and Executive Chef of Heritage Tavern and founder of Fox Heritage Farms. Fox Heritage Farms allows him to follow his passion for raising heritage breeds of pigs that are served both in his restaurant and other Madison-area kitchens. His elevated farm-to-table cuisine shines due to his tenacious attention to detail and always pushing himself to offer the unexpected.

This movement has also been driven by the diner’s desire and demand for food that has been created with passion and is creative and delicious. There are a number of Madison-area restaurants that put their roots down years ago and are reinventing themselves and an unprecedented number of new restaurateurs whose priority is to impress and excite their guests. We all have our favorites in addition to the aforementioned: The Tornado Room, Sardine, Taqueria Guadalajara, Greenbush, Grandpa’s Pizzeria, Salvatore’s Tomato Pies, Lombardino’s, Pig in a Fur Coat, Sushi Muramoto, Himal Chuli, and Nostrano.

While experiencing the depth and breadth of culinary creations, there is an added incentive to visit restaurants, too. Their bars and taverns are now taking their beverage menus to new heights. A new breed of bartenders put as much thought into their cocktails as restaurant chefs put into creating dishes for the menu. The classics are still king but many have been re-created with a twist. They are now using tools and ingredients that have never been previously used. Local beverage producers are also experiencing a broader market with Madisonians always wanting something new to try. We now enjoy Bos Meadery, Cider Farm hard ciders and apple brandy, Ruby coffee roasters, Wisco Pop, Yahara Bay Distillery, Old Sugar Distillery, and local breweries opening as fast as restaurants.

Not only has this revolution inspired many in our restaurant community but in the farming community as well. People who felt it was not viable to farm have found markets in selling to restaurants, local grocery stores and at our local Farmers’ Markets. What started with one weekly Saturday market around the Capitol Square in 1972 has flourished into markets around the city daily during the summer and early fall months. We see mainstream grocery markets with local and organic sections.

There is also the option of our rich Community Supported Agriculture (CSA) culture that allows one to invest in a local farm and reap the benefits of its bounty throughout the growing season. Farmers have extended their seasons by cold storage of root vegetables that become more complex in their flavors the longer they are stored. One can now enjoy vegetables that were harvested at the end of last season while the new crop is sprouting in its current season. This may seem normal in 2016, but 20 years ago it was unheard of.

Farmers such as Richard de Wilde of Harmony Valley Farm, Tricia Bross of Luna Circle Farm, Steve Pincus of Tipi Produce, Jim and Rebecca Goodman of Northwood Organic Beef Farm, Bill Warner of Snug Haven Farm, John Aue of Butter Mountain Farm, to mention a few, have all paved the way for a continued interest in growing our food supply in south central Wisconsin. They are reclaiming our foothold on Wisconsin’s rich farming community that has been disappearing over the past 50 years.

As life continues to speed up and we spend less time preparing our food, it is important to challenge ourselves to bring our families and friends back to the table. We must teach our children both the value of and skills for cooking their own food. On the occasion that you are deciding to dine out, keep in mind those who are making a conscience decision to source their product from a local, sustainable purveyor.

I encourage you to be part of this revolution that will make farm-to-table commonplace and keeping our beloved city on the culinary map.