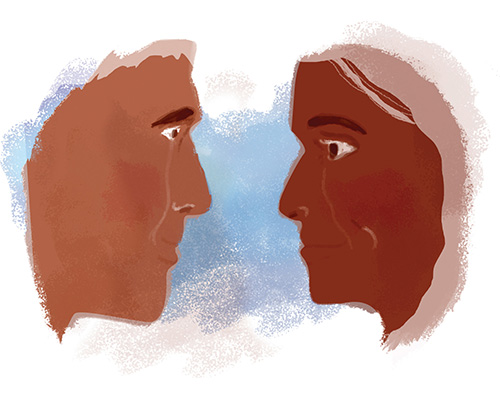 When a new facilitator entered the room on the third day of a social justice workshop I was participating in, the tension was palpable. We had been discussing the relationship between various forms of oppression, particularly racism and heterosexism, and several people in the room seemed shut off and angry.

After assessing the landscape, the facilitator declared that we needed an intervention. She told us to pair up, face our partner, and place our palms against those of our partner. She then ordered us to look each other in the eye for five minutes. If we could not hold our gaze, we could walk over to a mirror in the room and look at our own reflection instead.

When she signaled the end of the five minutes—which felt like an eternity—I noticed that most of us had tears streaming down our faces. This activity shattered the shields we’d been using to protect ourselves from feeling alone and alienated, within the workshop and beyond it, in our everyday lives. It also revealed the fuller humanity of our partner and ourselves as the eyes generally cannot hide the joys and struggles common to all of us.

On the heels of this exercise I felt the truth of Washington Irving’s words: “There is a sacredness in tears. They are not the mark of weakness, but of power. They speak more eloquently than ten thousand tongues. They are messengers of overwhelming grief, of deep contrition and of unspeakable love.”

Given the love theme of this Our Lives issue, I could think of no better topic to focus on than vulnerability, which was at the heart of the exercise described above. As a relational therapist, I celebrate when clients allow their partners to see cracks in their armor. Those fissures truly are where the light enters us and intimacy can grow. For example, I worked with a couple who were fighting about a common relationship issue: one partner feeling like the other was not making the relationship a priority. The two partners turned their bodies away from each other as they both complained that the other did not hear her perspective. I encouraged them to focus their attention inward, instead of on what the other partner was and was not doing or saying and, with curiosity, notice what was going on there.

Sure enough, the partner who felt she did not matter touched into a sense of invisibility, something she had felt since she was a small child. She attributed her partner’s workaholism to a lack of desire to spend time with her and reexperienced the old shame and sadness associated with feeling unimportant. Meanwhile, the other partner devoted significant time and energy to her career in large part because she had spent most of her life caring for others’ needs, including her alcoholic mother’s. Thus she had decided to put her own vocational dreams on the front burner and unapologetically declared she would not sacrifice herself to yet another relationship.

The protective mechanisms they had developed at an earlier time to protect them from more wounds were getting in the way of seeing that they both yearned for the same thing: to feel seen, heard, and valued. After we created a space in which they felt safe enough to let their guard down, they could turn toward each other and use their vulnerability as a strength. From this softer, more open place they said things the other could actually hear, like, “I miss you,” “I’m scared of losing myself again,” and “I feel lonely.” Having heard these more tender words, each found it easier to respond with reassuring, empathic, and appreciative statements, and connection was restored. It turns out these two individuals did want to be with each other and mostly needed to remember how to attune to themselves and each other with acceptance, compassion, and care.

As I write this piece, I can hear skeptics’ voices in my head. Perhaps we associate vulnerability with weakness or something only an overly sensitive type would care about. Ironically, the best counter-evidence for doubt about the significance of vulnerability lies in our own lived experience. If we honestly investigate the encounters of our lives—which is no small feat given human beings’ capacity for self-deception—we find the deepest felt sense of love and belonging in vulnerable moments. These moments generally occur when people really see and accept us as we are. For them to be able to do so, however, we have to let ourselves be seen. As Ash Beckham said, “If you want someone to be real with you, they need to know that you bleed, too.”

Ultimately, our lives are made up of ten thousand joys and ten thousand sorrows. When we attempt to avoid or reject the sorrows, we dampen our capacity to feel the joys. In contrast, when we deepen our capacity to feel the vulnerability of our living and dying bodies and world, we can live and love with our whole hearts. In Brené Brown’s words, “Only when we are brave enough to explore the darkness will we discover the infinite power of our light.”

Connie North has an MS in marriage and family therapy and a PhD in education. She uses a mindfulness-based, justice-oriented approach and has taught and written about LGBTQI, equity, and diversity issues.