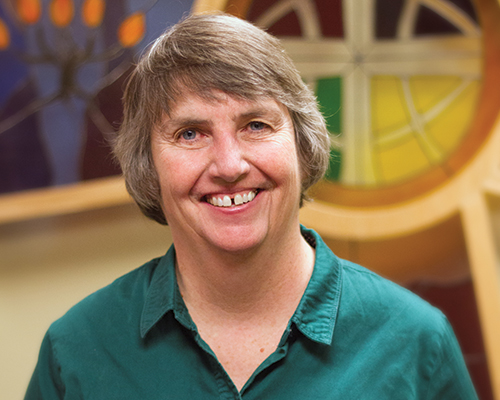 First off, please tell us a bit about yourself: Who are you, where are you from? How did you come to be doing the work that you’re now doing?

Religion has always been a part of my life. Early experiences I had with contemplation and dialogue between religions while living in Japan influenced my spiritual path and sense of calling. I value learning from other practices and deepening my faith within my own tradition. I was ordained into the Evangelical Lutheran Church in America (ELCA).

Early in my ministry, I questioned whether acting on my same-sex attractions would negatively affect my relationship with God. As I discerned that the real sin I encountered was in the cultural prejudice against LGBT people, and not my sexual orientation, I began to come out to more people. But that eventually meant leaving my profession.

Being an activist helped to carry me through my exile from the ministry. I joined a movement that helped ELCA clergy and churches to practice ecclesial disobedience. I moved from feeling afraid that I was sinful and of being exposed to being grateful for people tolerating me as lesbian to knowing exclusion of LGBT pastors was wrong. I had a voice in challenging the rules.

I came to Madison from the Twin Cities in 2004. Southern Wisconsin feels familiar. I grew up in Milwaukee until age 14 and attended high school in Adams.

In Madison I have worked largely in secular nonprofits but continued my connections with the church. St. John’s Lutheran Church invited me to be an interim pastor during Rev. Ken Smith’s sabbatical. The experience helped me decide to return to the clergy roster after the ELCA changed its rules about pastors in committed same-sex relationships in 2009.

Recently, for the first time since leaving the ministry, I received a full-time call as a pastor doing advocacy work for the church beginning in January.

Why did you decide to organize the LGBTQ in Faith Communities event / why is it important for the community?

I still meet LGBT people who say they aren’t religious but then reveal that they have a complex related to religion or contradictions they haven’t resolved. It was with this in mind that I started a small venture, Seekardia.

My experiences with LGBT people and religion were confirmed at the very successful Dialogue on Sexuality LGBTQ conference that OutReach LGBT Community Center organized in 2012. The next year, I asked OutReach Executive Director Steve Starkey if they were going to organize a conference again. He said they welcomed my offer to coordinate efforts with OutReach as a partner. Also involved on the planning committee are Rich Fluechtling (First Congregational United Church of Christ), Kris Hallisy (Trinity United Methodist Church), and Rabbi Bonnie Margulis (Wisconsin Faith Voices for Justice)

What are some of the challenges you think are specific to LGBTQ people in faith communities?

Many LGBTQ people, while exploring which community strengthens their spiritual path, also need to ask which ones are welcoming to them as a sexual minority and question what communities mean by being “open.” Is a community open on a local level but not on a larger organizational level? Is a religious body open, but not certain individual communities within it? Is a religious community open to LGBTQ at all leadership levels? Is a community only open to parts of the LGBTQ acronym? If it isn’t as open as it could be, do you have a voice to help create change there? Where are you moved to be in the midst of all of these questions?

For some there is the issue of choosing between an open community that doesn’t reflect their tradition and one that isn’t very open to LGBTQ people but for them is more meaningful in its religious practice.

What do you hope will come of the event, both for yourself and those who attend?

We want to make our welcoming religious communities more widely known to LGBTQ people in our area and the voices of LGBTQ people more known to religious groups. We would like to use this event to learn from one another in various faith traditions about what it means to be open to LGBTQ people. What can each of us offer? What more can we learn?

What are the specifics of the event, and how can people get involved/find out more?

“LGBTQ in Faith Communities: There Is a Place for You” will be held on Sunday, February 16 at Union South in Madison from 1 – 5:30 p.m. Our keynote speaker will be the dynamic Rev. Everett D. Mitchell, of Christ the Solid Rock Baptist Church. We’ll also have a diverse panel discussion, engaging workshops, and a resource fair. The cost is $15, or $5 for limited income. You can pay at the door. We also welcome sponsors. If you’re interested in reserving a table or being a sponsor please go to www.seekardia.com or contact me with questions at [email protected] The deadline for sponsorships is January 31.