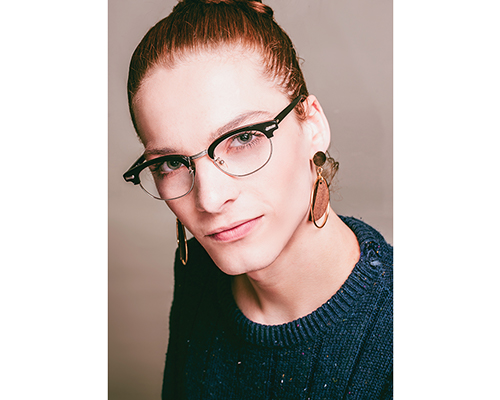 My life is pretty weird—I’ve been home-schooled all my life, I’ve been professionally taking portrait photos since I was 14 (including for this magazine) and, instead of having the normal hobbies of a 17-year-old, I spend most of my free time learning everything I can about civics and participating in political activism.

When I was nine or so, my dad took me to the Act 10 protests at the Capitol in downtown Madison. We had a basket full of muffins to give out to our fellow demonstrators and a sign that said “homemade treats and productive dialog.” During my early childhood, my parents made sure that I knew I had a voice, and that I can and should use it. They made it clear that expressing my views and speaking my mind was the right thing to do. My family was constantly talking about politics and the importance of civic engagement.

Because my parents are both cis and straight, they didn’t talk much about their feelings toward the LGBTQ+ community—even though their feelings were and are that of love and support. My parents never gave me the impression that they thought being queer was a negative thing, they just didn’t talk much about the fact that it was a positive one. My family went to, and still goes to, a politically diverse Evangelical church that’s not too enthusiastic about LGBTQ+ inclusion. In the homeschool groups I was part of in grade school anti-queer attitudes were the norm, and those with affirming attitudes had no platform to speak up.

When I was a pre-teen and discovering my identity, it was hard to know what I was and wasn’t allowed to say because I didn’t have a clear idea about what my parents and family thought about the queer community. On one hand, I knew that I should make my voice heard, but on the other, what I wanted to say was, “I really like boys, and makeup, and dresses!” Because I grew up in a household that didn’t talk much about the LGBTQ+ community or the issues it faced, I was unsure as to how proclamations like that would be received. I didn’t know how to explain what I was feeling.

(Quick footnote: Both my parents come from education backgrounds. They made the decision to home-school me through grade school because it presented unique and valuable learning opportunities, not because they felt animosity towards the public school system. I made the choice to remain home-schooled through high school for the same reasons.)

I decided that the safest and most comfortable way to express myself was through becoming the most outspoken and active “ally” I could. Whenever I was having a conversation with friends or family where queer rights came up, I would argue fervently for them.

But after a few years of knowing who I was and expressing myself vicariously through my opinions and political beliefs, I became frustrated by the lack of clarity my friends and family had when it came to my identity. So, on April 11, 2015, at the ripe old age of 14, I decided to come out. I told my parents that I was trans and mostly interested in dating guys. After coming out, I had the clarity I needed to begin to express myself authentically and honestly.

After a couple years of practicing honesty and authenticity, as well as witnessing my country and my state elect a demagogue president, I was ready to dive headfirst into activism. I started photographing every political protest and rally I could, I started going to every Dane Dems meeting there was, and I tried even harder to make a difference in my community. In 2016, my amazing friend Nick Loveland and I organized The Equality March For Unity And Pride On Madison, an event meant to commemorate the one year anniversary of the Pulse massacre as well as bring light to the issues that face the LGBTQ+ community. We had speakers from local activists and visionaries to state and federal representatives, such as Melissa Sargent and Mark Pocan.

I’m currently interning as a campaign photographer for Kriss Marion, an amazing woman running for state senate in District 17, as well as looking at colleges on the east coast and in central Wisconsin. I’m hoping to study for a BA in art or a degree in political science. I’m so unbelievably excited for what the future has in store.