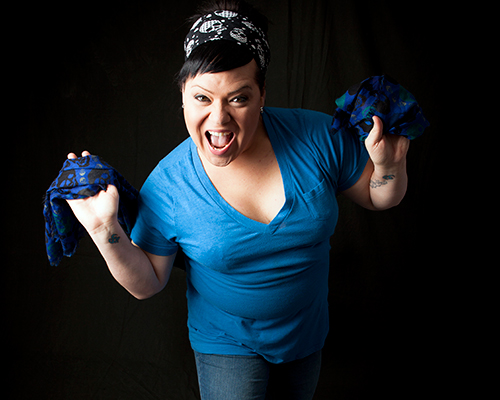 Ever since I can remember, I’ve had a knack for entertaining those around me and making them laugh. When you come from an environment like the one I was immersed in, you learn to make your surroundings work for you.

I grew up in a very small town in Texas, an hour north of Dallas. As you might expect, my family was very religious and conservative. Obviously, I did not fit that mold.

The toughest part was grappling with my religious upbringing and its incongruence with my gender identity. I did a lot of work in the fundamentalist Christian Church for a while, as a worship leader and youth leader and so much more, but I eventually came to a place where it was too hard to keep up the fight between my identity and my spiritual path.

I went between performing in drag and singing in a band for some time. In 2004, I moved to Los Angeles. I made a bit of a splash on the drag scene at the beginning of my time in LA. I had the good fortune to perform with many of the wonderful girls from RuPaul’s Drag Race during that time. I was nominated for the WeHo Awards Drag Diva three years in a row and spent a wonderful year as Miss Los Angeles USofA.

I began transitioning shortly after moving to Los Angeles, and at some point I started feeling less like a “showgirl” and more like what I call a “Day Lady.” In other words, my desire to “pretty up” by encasing my body in duct tape and donning bone-fracturing shoes waned and gave way to the desire to put on a muumuu and throw beer cans at the neighborhood kids.

My journey to becoming a comedienne was a little different. I’ve done almost every job imaginable, and at one point I was even a flight attendant. I recall a flight from New York to Los Angeles with a fun crew. We had a great time, and when we landed we had a long trip to our hotel. I had everyone laughing, and one of the ladies said, “You should be a comedian.”

“I’m only situationally funny,” I retorted. Still, those words stuck with me and really started my journey. It was a fairly smooth transition, since I had been onstage since I was small and have hosted drag and cabaret shows for years, but the first time was nonetheless nerve-wracking. My friends in The Queers of Comedy asked me to host one of their shows, and I accepted. From that moment on, I was hooked.

I love making people laugh, and this was exactly what I wanted to do. Luckily, Los Angeles was the perfect place to learn and start. I was able to perform with some of the most amazing comedians– such as Sarah Silverman, Tony Tripoli, Fortune Feimster, Wendy Ho, the incredible Shawn Pelofsky—and on the stages of the world-famous Comedy Store and improv clubs.

I decided to leave Los Angeles so that I could work a region and try to expand my audience. My intention was to go with my best friend to Little Rock, Arkansas, but first we came to Madison to work before we moved. When I got to Madison, people would say really strange things to me on the street like “Hi.” I had a guy come up to me and say, “I saw you at the zoo!” How bizarre this seemed to me.

I found this city to have both a big and little feel at the same time. At first I was apprehensive, but ultimately I decided I really liked it. So I decided that my bestie would have to go it alone in Little Rock.

I’ve been an avid Internet broadcaster for years: my bestie Gregg and I had a show together that ran for three years called “The Dina & Gregg Show.” It was kind of hard to keep up, as he was living here and I was in LA—and now I’m here and he’s in Little Rock. So, as the proud co-owner of DiGN2ItRadio.com, I decided to keep our station going by doing my own show, “The D Word with Dina Martinez” (now with co-host Trina Avalon Piranha).

I’m also an Intuitive healer and spiritual teacher. Once I was finally able to figure out what I believed and what path was right for me, I was able to grow and learn amazing self-truths. I’ve been a healer since I was in the fundamentalist church, but have been able to incorporate my journey’s experiences into my practice, called Light of Love Consciousness

I speak on spirituality and trans issues frequently and would like to tackle the issue of LGBT faith. As a former fundamentalist, I think it would be great to create a spiritual community that is interfaith and radically inclusive with a more contemporary feel. I really want to create a safe space where people can come and get healing for their lives and interact with each other in a real way.

I had a group of ladies in stitches the other day, and I thought to myself, I am so blessed to be able to be a healer and a comic, because I get to heal people through energy work and through laughter. There couldn’t be a better job, ever!