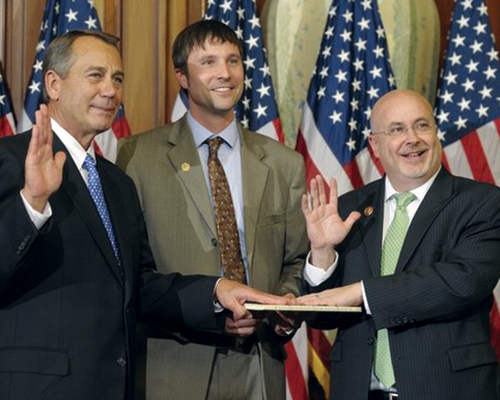 This past November, the people of Wisconsin’s Second District made history by electing me to serve in the U.S. House of Representatives—the first time a congressional district elected back-to-back openly gay citizens to Congress. It was an honor to follow in the footsteps of my friend and mentor, Tammy Baldwin, who made her own history that election night as the first LGBT member of the U.S. Senate. Senator Baldwin and I are two of the seven LGBT members of Congress—the largest group to ever serve at one time.

When I first began my career as a public servant, I wasn’t thinking about making history. But my sexual orientation had played a major role in spurring me to a career of public service. In my early 20s, I was the victim of a hate-based attack. It was a disturbing, life-changing experience—to be physically assaulted because of who I was and who I loved made me feel unsafe and unwelcome in a country founded on the principles of equality and justice. I knew I could hide my true identity and live in fear, or I could decide to become an advocate and a fighter for people who were treated as less-than because of our sexuality. I chose the latter.

Today, as I proudly serve south-central Wisconsin in Congress, the drive for full equality for all citizens—whether they are lesbian, gay, bisexual, or transgender—has never moved more quickly or broadly. Just two years ago, the discriminatory Don’t Ask, Don’t Tell policy was removed from the books. Twelve states and the District of Columbia have legalized gay marriage, compared to only six before Election Day. Fifty-eight percent of Americans now favor marriage equality, including an 81 percent approval among Americans ages 18-29. LGBT Americans are openly and happily working as CEOs, teachers, professional athletes, community leaders, and elected officials.

But as fast as progress is moving, we know that now is not the time to take our foot off the gas pedal. Not when surveys show that nearly nine out of every ten LGBT students have experienced harassment in school. Not when employers in many states can still discriminate on the basis of sexual orientation and gender identity. And not when the ability to marry the person you love is still out of reach for LGBT Americans in a majority of our country’s states.

As history teaches us, progress rarely comes from one person, or even one group of people. It takes time, it takes courage, and it takes advocates reaching out to a breadth of supporters and allies.

That is why I am a proud co-chair of the bipartisan, bi-cameral Congressional LGBT Equality Caucus. Our mission is to advance the cause of LGBT equality through inclusion and outreach. With both legislation and advocacy, our 108 members are committed to achieving the full enjoyment of human rights for LGBT people in the U.S. and around the world.

Already this year, the caucus has introduced bipartisan legislation that will move the LGBT community closer to full equality. This April, I joined 150 other members of Congress in reintroducing the Employment Non-Discrimination Act (ENDA), which would establish basic protections in the workplace to prevent discrimination based on sexual orientation and gender identity. Non-discrimination policies are already in effect at a majority of our nation’s largest companies, and the time has come to ensure they are also passed into law. I am also a co-sponsor of the Student Non-Discrimination Act, which would prohibit at the federal level discrimination in public schools based on sexual orientation or gender identity.

On a personal level, it was a proud and exciting day when my husband of six and a half years, Phil Frank, received a spousal ID from the U.S. House of Representatives—the first LGBT partner to receive such an ID. Previously, Phil and other LGBT spouses had been referred to as “designees” of members—a confusing, but clearly second-class, identification. Phil’s ID is an important, symbolic step, but my husband, and federal couples across the nation, are still not entitled to the same benefits as the spouses of our straight colleagues. I believe on the issues of equality and fairness, the federal government should set the example. In the near future, I’ll be introducing a bipartisan bill that would entitle federal employees and their domestic partners to all the benefits of married federal employees and their spouses.

The quest toward full equality for LGBT citizens will be long, and it will likely continue to be filled with setbacks and obstacles. But I have never in my life been more confident that on the issue of LGBT rights, it is not a matter of “if,” but “when.”  The key will be for us to work together, not just with our friends, but with our broader communities, to demonstrate that a world where we are all treated as equals is a better place for every American.