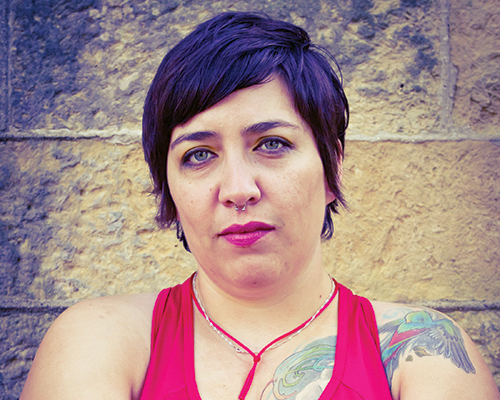 There is nothing rational about choosing to play roller derby.

You’ll need to try for a few years before getting drafted into the league. You’ll be devastated when you find out you didn’t make it on the roster for that really important game. Then you’ll work your ass off (five to six days a week) for a few more years to make it onto the all-star team, only to lose that spot a few months later to a more talented skater.

You’ll spend too much time volunteering to help run the league business, and too much money on skates, wheels, gear, travel, chiropractor, massage, and partying. You’ll likely have tough negotiations with your significant other about your commitments at home vs. derby. Inevitably, you will also have recovered multiple times over the years from broken bones and torn ligaments, and will probably need a knee replacement before the age of 50. Seven years ago, I didn’t know all this when I found myself falling completely head over skates in love with the sport. And even now that I know it, of course I’m going to keep playing.

This is not going to be an article about the rules and the history of roller derby. You can Google that. This is about the Mad Rollin’ Dolls and how it has been the most empowering experience of my life. I don’t speak for every derby girl. Every league in the world is different, and every skater’s experience is her own. This is just my derby story.

In 2005, my friend Jesse invited me to see Arizona’s Tent City Terrors play against Madison’s Dairyland Dolls, the all-star team from the Mad Rollin’ Dolls roller derby league. It was the third or fourth interleague bout ever played in the modern flat-track derby revival. I watched with admiration as the Arizona jammer (the player who scores points for her team) lapped around the track after powering her way through a brutal DD pack, flipping the audience the bird and yelling obscenities at us. She represented everything I hoped I could be as a woman: strong, beautiful, smart, and subversive. The decision for me was simple: to get involved with the league as soon as possible.

The short story: I signed up to volunteer as a scorekeeper, tried out, broke my tailbone, didn’t make it, was a referee for a year, tried out again, tore my left MCL, was drafted by the Unholy Rollers anyway (thanks, team!), had a few good years, made it onto the all-star team (and then off, and then on again, and then off again), tore my left PCL, recovered, tore my right PCL…and, knock on wood, I’m going to skate this whole coming season without further injury, damn it.

During the last seven years, I was also the secretary for “The Bored” (not a typo), then the manager of the Rules & Play committee, then a team representative on the revamped Executive Board for two years, then the treasurer for two years, then a co-captain of the Dairyland Dolls for two years, and now, happily, no longer in charge of anything. I served on nearly every committee in the league and have just recovered from a serious case of helium-hand when it came to volunteering for anything and everything that needed doing.

The first and most dramatic transformation that I experienced as a derby skater was in my relationship to my body. Like many women who come into roller derby, I had no prior team sport experience and was not athletic. I did not wear fitted clothes or short shorts, and had a generally shameful attitude toward my body. Within the first few weeks of what’s called “baby-doll” training, I started to have quad muscles. Within a few months I had to go up a size in jeans to accommodate my growing booty.

At 200 lbs, I was never the fastest skater out there. I happily discovered when we started contact drills, though, that I could do serious damage as a blocker. We have skaters in our league who are barely 5 feet tall, and some amazons; some who weigh 100 lbs, and some over 200 lbs. Regardless of body type, women realize their potential to play a full-contact sport that requires endurance, agility, strength, and balance.

Additionally, you are given permission to wear fishnet stockings, booty shorts, cleavage-revealing tops, crazy makeup, fringe, glitter, or none of the above. You are encouraged to create a character—an ulterior personality—on the track who is distinct from Suzy Dayjob. You can decorate yourself any way you want, and you have 100 percent control over that representation. Some say the costu-forms and stage names harm the legitimacy of the sport. This expression of gender, sexuality, and female strength, which is determined by each skater for herself, is the icing on the confidence cake and is what makes us rockstars and not just athletes. I have every right to be rockstar, thank you very much. If I didn’t like the performance aspect of roller derby, I’d be playing a different sport.

For the Love of DIY

Not only do I continue to grow as a skater, but I am also constantly learning to be a better person. If you’ve ever read an article about roller derby from the mainstream media, the basic thread is: mom (or librarian, or teacher) by day, roller girl by night. First of all, that’s inaccurate. I am a research scientist by day and derby girl every available second of the day and night. And those articles don’t go any further than that to explain why this is significant.

We have skaters (and referees, and support staff, and volunteers) from every socio-economic background, every educational level, every political stripe, every sexual and gender orientation, every religion, and every shade of unconventional on the cray-cray spectrum. All of these people, without being paid, run every aspect of the business, from ticket sales to training to marketing to bout production. Also, no one coming into the league has any experience running a roller derby league. Believe it or not, there is conflict.

I know from personal experience that if you’re being an asshole, someone will let you know real quick. I’ve made my share of mistakes, said awful things to people and behind their backs, participated in counter-productive and passive-aggressive behaviors, and taken things personally when there was no reason to. It’s to be expected, acknowledged, addressed, forgiven, and learned from. We have worked hard over the years to handle problems before they come to a head. We’ve sought out training for a handful of mediators who help solve conflicts in the league. We coach our rookies on how to be good league-mates. There are not many spaces in our lives where we are treated with such brutal honesty and forgiveness, which makes derby a great place to try something new, make mistakes, and learn from them.

The league is also a political experiment. Anyone with an idea can write a proposal, present it for a vote, and make change happen. Anyone. In my time, I helped reorganize league management by helping create the Executive Board. I also helped create Team Unicorn (our first non-chartered interleague team), a summer season at the Hartmeyer Arena, a league budget, and a Dairyland Dolls B-Team, and worked on countless other projects. I worked alongside teachers, accountants, baristas, and bartenders on committees and subcommittees and ad-hoc committees (remember, unpaid) to make things happen. I can’t think of any other organization where all of its members are equally empowered and equally responsible for the success of their organization. I am so proud of the chutzpah of those women and men who first created this league, and how we’ve been able to grow and change in order to carry their mission forward.

Finally, sappy as it sounds, I have grown in my heart. I am overwhelmed thinking of all the ways members of our league have shown love to each other and to our community. We signed up to make meals for a league-mate whose child was sick in the hospital. We arranged rides for a wheelchair-bound league-mate so that she could continue to attend practices while injured. My league-mates sent me flowers when my father passed away. We support each other through break-ups, divorces, last-place finishes at regionals, chemotherapy, surgeries, family deaths, and through the devastating loss of one of our own league-mates. I was donating blood once and told the phlebotomist about how a league-mate’s brother’s house had burned down and the kids had lost all their toys in the fire. The league showed up with bags and bags of toys for those kids. “So, it’s like church,” she commented. I answered, “Yes, I do go to church on Sundays; I just call it roller derby practice.”

We do the Polar Plunge, the ACT Ride, the GSAFE Run/Walk, and donate a portion of our proceeds from ticket sales to a variety of charities. I don’t take it for granted that our continued existence as a league is a direct result of the support that we get from our community. It only makes sense that we give back.

I’ve also discovered interests that I did not know I had. I started leading practices in my second year of skating, and then moved into training baby-dolls. I also served in a coaching role when I was co-captain of the all-star team the last two years. More recently, I have been training skaters in the Mad Wreckin’ Dolls, the recreation league. I love to see lightbulbs go off. I like breaking down complicated skills into their basic parts. I like troubleshooting technique. I love to see people smile when they can finally execute some move they’ve been working on for months.

I know now what roller derby has given me, and I love sharing that with other people. In short, I love witnessing the transformation and the confidence that comes with learning derby—in others, and in myself.