I grew up in McFarland, a small community right outside of Madison. McFarland is made up of primarily white, middle class folks who value family and like the small town feel. Being raised a Jehovah’s Witness meant my mother and father thought McFarland was a perfect location to raise children. My father was a middle school teacher in the Madison school district, and my mother ran a home daycare.

Practicing the religion at a young age was more than a mere challenge. My mother prepped me for what lay ahead when I would attend public school and living up to biblical standards. I was set apart from the rest of the kids in school, and so ridicule and persecution became a part of daily living. The key to survival without going insane was finding a good group of young people to associate with that accepted me for who I was. I guess that rule not only applied then but clearly still applies today.

In high school I broke away from religion for a while to explore the world and what existed outside the Old and New Testaments. This was an exciting time. The restraints were lifted, and I ran amuck. I was met with an onslaught of feelings as adolescence took hold. I turned to drinking, drugs, and acting like a badass to cover the underlying feelings that were trying to surface. After finally graduating from high school I went to MATC for Real Estate Development. Along with college came the “college experience” of girls, partying, and paying your own bills. This is where I really learned that moving out the day after graduating high school wasn’t going to be as easy as I thought.

After being on my own for a while, I did some soul searching and thought going back to God would help me fight the inner struggle of not being comfortable with who I was. In truth, looking back I think it was more of a refuge where I could not have to deal with the fact that I was gay. I worked my way toward baptism, which required a year and a half of intense Bible study and living a life based on Biblical principles. I went door-to-door preaching the good news of God’s Kingdom and had plenty of interesting experiences with property owners who didn’t care for us being on their property. About a year after baptism, I met a girl and, as was custom, we became engaged. But at age 24 the feelings boiling underneath it all were coming to a head.

During my engagement I stumbled across a farm boy from up north. He, like I, was from a very traditional family, was scared to death to come out, and looked at the “gay inside him as a disease.” We were a comfort to each other and both realized we weren’t alone in dealing with this thing we saw as blight. Needless to say, our relationship developed very quickly. We talked daily on the phone for almost four months before we ever met in person. I will never forget the feeling the first time I met him in person. It was a roller coaster of emotion that one can only hope to experience at least once in their life.

Extreme confusion from the feelings that had developed for the farmer along with the guilt I had for my unfaithfulness to my fiancé led me to my elders to finally explain the weight I was carrying. I begged and pleaded for help and guidance with what I was dealing with, and for mercy for the “act” I had committed. Despite my utter remorse and sobbing cry for help, they disfellowshipped me, and my whole life changed in a matter of two hours. My fiancé and my relationship with my mother and my friends were all no longer allowed. I was shunned from the congregation and anyone else who was a baptized Jehovah’s Witness. Despite the sudden upheaval from everything I knew to be my life, it felt like the burden of secrecy had been lifted from my body.

A Plan B for Life

After coming out I started to explore the local gay scene a bit and realized there was something missing. I became determined to change that. I met this edgy, blond boy from LA that thought he was the coolest thing to hit Wisconsin since the invention of cheese curds. We had the same dream and goal: to open the best gay dance club Wisconsin queers could be proud to call home.

Many challenges lay ahead: location, funding, concept, timing, a name—and all of the things that go into starting any business. We quickly got to work and after two years of meetings with Corey Gresen, Plan B opened its doors on Pride weekend, August of 2009.

Plan B became more than I expected. It blew up immediately into a mecca for not only the gay community, but also as the place to dance in Madison. I enjoyed success early on, loving every minute of it. I was able to give back to the community that I could now call home and also support many organizations that I was a part of. I’d not only finally integrated myself into the community but also helped create a place that many others could call home. 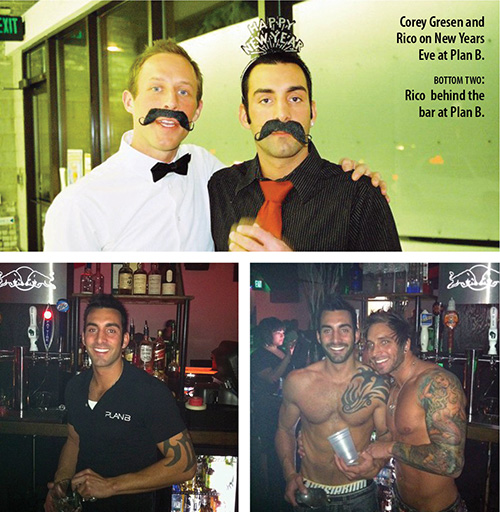 After five years and achieving all I had set out to do I decided it was time to “B OUT.” I told Corey that I had thoughts of leaving, and once you don’t have a passion for your work it’s time to get out. He was less than excited. I had held the reins at B during my tenure, and it was time for him to step up whether he liked it or not. It wasn’t the easiest split. Getting bought out by your business partner can be similar to a divorce. Terms need to be set, and things aren’t always mutually agreeable. Let’s just say there were some moments when I found myself waking up at the club after a long night of crying into a bottle. In the end, though, it did work out. Plan B is still thriving, and, more important, Corey and I will be life-long friends.

It’s weird to think how life comes full circle. When I went to college I studied Real Estate, for which I was always passionate. I remember reading the income property advertisements and seeing all the homes for sale in the Sunday newspaper when I was still living with my parents. I decided this was a great opportunity to get a start in a field I’ve always felt drawn to work in.

I studied for (and passed) my licensing exam shortly before leaving Plan B. After the buyout was complete, I joined with RE/MAX Preferred. I had met so many wonderful people and wanted to continue building relationships with the same community where I’d been able to make my home. I wasn’t going to do that in a cubicle. With the skills I had learned over the years in sales and running my own business, I couldn’t think of a better fit than Real Estate. I was recently named “Rookie of the Year” for RE/MAX Wisconsin and continue to develop a thriving new business in the field I love. I look forward to spending many more years helping the community that supported me with open arms when I needed it the most.