It’s a State of Mind 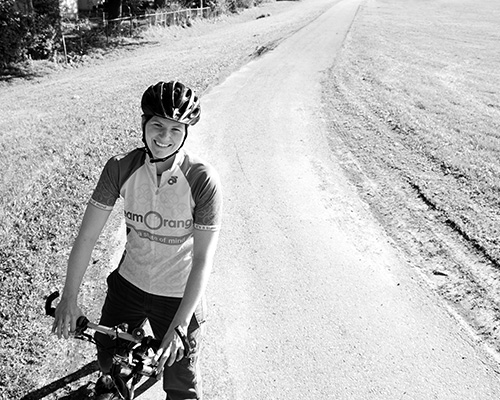 Where are you from and what do you do?  What is Team Orange and how did it come to be? Please tell the story of its origins. Team Orange began in 2000 when I joined a Women’s Club hockey team in Madison. It began as something quite silly: two teammates and I had orange practice jerseys, so we called ourselves Team Orange. It was silly and simply fun. We remarked when others had orange on their jersey or socks, and called them Team Orange, too.

As the silly, child-like idea got bigger, it slowly moved away from being about the color and on to being about a state of mind. If folks were encouraging and had a positive attitude, they were on Team Orange. It’s a state of mind. It’s a way of thinking; perhaps a life motto. It is not flawless by any means; it is a good intent.

One friend designed a logo and another printed stickers and magnets for me. As folks would do something supportive and positive, I started using Team Orange as an adjective, telling them about Team Orange and offering a sticker for their hockey helmet.

But Team Orange really started for me as a child. My mom instilled it in me. Her core beliefs are to be encouraging and helpful and to work together. Her state of mind has greatly influenced that of mine and my siblings.

When you say, “It’s a state of mind,” what do you mean? Team Orange is a way of thinking, specifically a way of thinking about life as us all being here for a common purpose—to ultimately spread kindness. There is a quote by George Eliot, “What do we live for, if it is not to make life less difficult for each other?” Team Orange is based in that.

The state of mind is about being a good team player, having a good attitude, supporting others whether they are “on your team” or not, assuming the best out of folks, being encouraging, positive, and constructive. Being benevolent. It is a good intention, never perfection. It is kindness. Human kindness.

Team Orange began with hockey jerseys and expanded to bike and running jerseys as well.

Does one have to be an athlete to be a part of Team Orange? Team orange isn’t about being an athlete. Athletics and team sports have simply been an easy avenue for me to spread the state of mind. Team Orange is about good intention and working together, and looking out for one another—similar to the mindset of team sports.

How can readers learn more about Team Orange? If you see someone sporting Team Orange sticker or gear, ask them about it. Folks can also contact me via teamorangeonline@gmail.com or check out the website at www.itsastateofmind.org