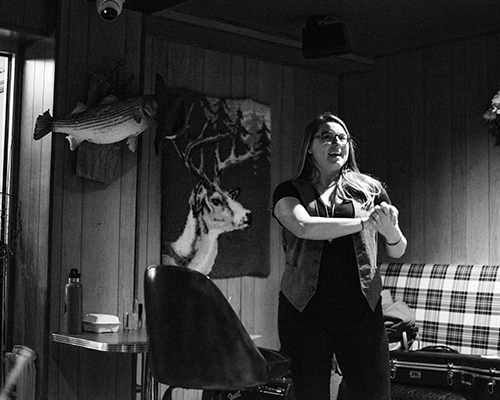 My first girlfriend was a My Size Barbie. She was the complete opposite of my crush at the time, Kit De Luca. Nevertheless, our relationship lasted for over a year, seeing each other on Wednesdays and every other weekend during visits to my dad’s house. Our relationship remained a secret. She wasn’t ready to come out. And I didn’t know I wanted to.

It took just days after I came out in fall of 2011 for my close (straight) friends to ask me questions about lesbian sex. Acquaintances and sometimes even flat-out strangers questioned gender roles in my relationships, with comments like “Who’s the dude?” or “Does the sex even count?”

At first, I was open to answering questions and welcomed the conversation. After countless months of the same invasive questions from strangers who seemed to think they deserved answers, however, I started to realize not only the ignorance behind them but also the exotification that was tied in. I was learning more about myself as an out lesbian and found myself straddling my new identity (as well as other women) and the “straight world” I’d left behind.

The first question my mom asked me when I came out to her was, “What, are you just sick of guys or something?” And while, yes, I was, I had to explain that is not how or why I “became” gay, and it was these types of questions and conversations with people that led me to comedy.

It took months for me to make the perfect three-minute set to perform at an open mic night. When I finally worked up the nerve to do it, I chose a random Wednesday night in August 2013, and I nailed it. My material was all based on ridiculous and humorous things people had said to me after coming out. They ranged from “But you don’t look like a lesbian” to the difference between using the word “girlfriend” and “partner.”

Fellow local woman comic Stevie Leigh Crutcher was a guardian angel that night for coming up to talk to me before the show and helping to ease my nerves. Well, what she actually said was, “Don’t feel bad if the other comedians don’t laugh at your jokes,” as I was getting ready to workshop before the show. So maybe that comment didn’t quite ease my nerves but it was cool to meet another woman in comedy, and just her general presence there among a sea of what appeared to be straight, white, young men made me feel like I actually belonged.

My material is still very much centered on my queer identity, and I focus on topics of social and racial justice, dismantling stereotypes, and confronting systems of white supremacy. You know, nothing too heavy. Being on a stage with a captive audience is a perfect way to get people to shut up, listen, and leave with some tidbits they may not have had before. Like yes, you can still be racist if your dog is black, or no, not all femme lesbians are bottoms, you’re welcome.

I enjoy performing at shows that are queer- and woman-oriented, like Dina Martinez’s Lady Laughs Comedy Festival and The Yes Ma’am Merge with the Vanessa Tortolano of the Monkey Business Institute. I also love and owe a lot to Vickie Lynn of BCity BFunny from my hometown, Beloit, for giving me my first set in a show and offering even more opportunities after that.

One of my favorite shows was when I headlined at the Beloit International Film Festival with an all-lady line-up that included Stevie Crutcher, Vickie Lynn, Andrea Guzzetta, and Rebekah Gibson. It was my first headlining show and I’m pretty sure it was the first time both my mom and dad were in the same room since divorce court in the early nineties.

Currently, I’m working on writing more material that will continue to challenge systems of oppression and to expand my satirical song writing. I want to hone my skills to be the best comic I can be. I’m looking into enrolling in Dina Martinez’s stand up classes and would like to push myself way outside my comfort zone and attempt improv comedy. But for now, I’m going to finish this episode of Gossip Girl. XOXO