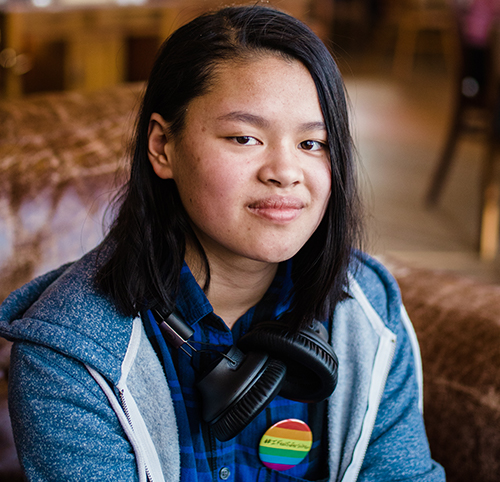 I’ve been one of the lucky ones. I haven’t been called hateful slurs, like “dyke” or “fag.” I haven’t been physically or emotionally bullied. I haven’t felt excluded or limited within my school or home environment. I don’t have to live a life of pretending or in misery.

I was able to come out at a young age and without experiencing any backlash. My friends and family were very accepting and loving, and my peers and teachers continued to treat me with kindness and respect. Although I have yet to face much adversity as a LGBTQ+ person, there are many people who haven’t been as lucky. I can’t just stand by and let them suffer. I have to find ways to help and protect them.

My name is Zoë and I am a high school junior at Clark Street Community School (CSCS). I am also one part of the L in LGBTQ+, and the founder of the #IFeelSaferWhen campaign, a public advocacy campaign devoted to creating safer spaces for everyone.

I founded the campaign last summer during my time at a U.W.-Madison teen advocacy writing camp called Rise Up & Write. I went into the camp prepared to learn and write about LGBTQ+ issues, and came out of it with a passion for advocacy and a way to use that passion to begin making positive change.

During my time at Rise Up & Write, I realized that safety is necessary to progress, as an individual and as a society. We cannot grow, learn, inspire and innovate if we don’t feel safe. Safety is crucial to our person, our community, and our entire world. Maslow’s Hierarchy of Needs recognizes that people must achieve a feeling of safety and belonging before they can even begin to work on personal development and growth.

These concepts resonated with me because I waited to come out until I felt comfortable and safe enough to do so, and now that I’m out, I feel much happier. I am able to better show my support and passion for the LGBTQ+ community. I am able to discuss and fight for LGBTQ+ issues more openly, including connecting with people that share my interests. Now that I know how freeing it feels to just be your true self, I want to do whatever I can to help give others that opportunity.

Sparked with a passion for advocacy and safety, I created #IFeelSaferWhen. I set out to ask what little things make people feel safer, and then to do those things. By making one person feel safer, you can create a less harmful environment for everyone. It’s an infinitely scalable approach. #IFeelSaferWhen started with a simple button campaign. I designed a button with a rainbow as the background, and then wrote “#IFeelSaferWhen” in the middle. I came up with the hashtag in the hopes of offering a simple tactic that people could use to share what makes them feel safer. My initial idea for the campaign was that people would take a button for themself, but also give one to someone else, and then post a picture of the button and an #IFeelSaferWhen message on social media. These small actions would help spark a conversation about safety, while offering up suggestions for people to implement.

While most of my Rise Up & Write peers moved on from their campaigns, I stuck with mine. I wrote an op-ed in The Capital Times, addressing the issue and importance of safety, and explained how my campaign could help initiate needed change. I wrote to influential LGBTQ+ YouTubers, asking if they could give it a shoutout on their channels or social media. In the simple, seemingly insignificant button campaign assignment, I had found a seed to grow with the potential for something amazing.

After the writing workshop I have continued to work on #IFeelSaferWhen. Soon after I founded my campaign, several people requested buttons and posted #IFeelSaferWhen messages on social media. Although #IFeelSaferWhen still has yet to gain major traction, I am determined to continue trying to grow and develop it. I thought back to the initial stages of my campaign and realized that I could develop a training kit that communities could use to make their environment safer for everyone. I could create activities, curriculum, and materials that could be packaged and distributed in classrooms and workplaces. I envisioned these being used as tools for community building, which would lead to safer environments for all. I’m now actively seeking partnerships and funding to turn this idea into a reality.

My story as an activist began at Rise Up & Write, and has continued with my #IFeelSaferWhen campaign. I’ve discovered what social justice issues matter to me. I realized that I am an activist and have the power to make a difference. Once again, I’m one of the lucky ones. I’ve had the opportunity to rise up and fight for social change. And I know this luck, this privilege, is my obligation to be tenacious and continue with such meaningful work.