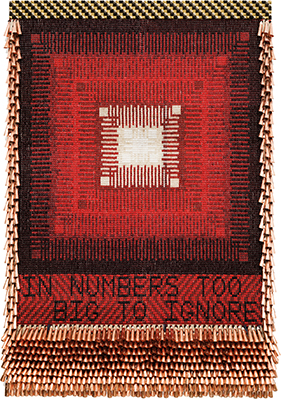 Representation matters. MMoCA Curator of Exhibitions, Leah Kolb, knows this and consistently delivers art that tells stories otherwise omitted from dominant cultural narratives. Kolb offers contemporary museum visitors who identify as LGBTQ and allied sub-cultural aesthetics that they can connect with, made by artists who embrace their own identities.

For many people who have experienced the pain of exclusion, the success of Jeffrey Gibson—whose first major retrospective, “Like a Hammer,” is crossing the country’s contemporary art world—is a hero’s journey of intersectional identity. In bringing this Denver Art Museum-organized exhibit to Madison, Kolb is again expanding the role of the art museum from a place of education and enjoyment into what she calls “a space for empowerment.”

“Like a Hammer” offers visitors the opportunity to experience the buoyant and bright world of Gibson, a self-described queer Indigenous man, an outsider, and maker who layers the tropes of abstract art—shape, form, color, and line—with materials from the artistic traditions of indigenous North Americans, such as elk hide, birch bark, and tin jingles. He does so with great skill, confidence, and zhuzh.

Gibson received his BFA from the Art Institute of Chicago and an MFA from Royal College of Art. He samples liberally from pop cultures, queer cultures, and indigenous cultures to create a synthesized mash-up, expressing multiple aspects of his multiple identities, which include Choctaw-Cherokee, painter, sculptor, and gay.

In his work, American History (JB) for example, Gibson quotes James Baldwin’s statement, “American History is longer, larger, more beautiful and more terrible than anything anyone has ever said about it.” Gibson illustrates this bold truism, written by a gay, African-American literary giant in 1963, with bright plastic beads, tin jingles, and nylon fringe, all materials used in indigenous arts or ceremonies that Gibson is reclaiming and assembling in new ways. Punching bags and bright, genderless figures, likely conceived in the European raves, gay bar dance floors, gyms, and North American Pow Wows he has experienced, show that the American experience now is just as beautiful and terrible as in Baldwin’s time.

Critics have challenged Gibson’s free use of traditional materials from indigenous cultures because of the way the work decontextualizes objects from their traditional purposes and places. Artists are no longer insulated by the general assumption that if they are part of a community, they cannot exploit, misrepresent, or even unintentionally harm it. As Gibson pushes boundaries and experiments with materials, deepening his understanding of who he is and his own heritage, he acknowledges that he is using what he calls “Historic Materials of incredible power” in non-traditional ways.

Gibson responded to these critiques, explaining, “I would never address anything to do with ceremony. I wasn’t raised in a ceremonial lifestyle. I would never incorporate someone else’s story without their permission. I would never steal someone’s design. I would never copy anyone’s beadwork or quillwork.”

Instead, Gibson is telling his own story, of his own negotiated dance through different worlds, a story of vulnerability, self-exploration and acceptance; of becoming connected to his body and his culture; of experimenting, finding his place and making his home.

Kolb knows that there are myriad ways to respond to Gibson’s bold creations and she does not shy away from the complex questions his work raises about displacement, cultural appropriation, identity, and the history of racism and homophobia in the U.S. She sees art as an opportunity to create discussions we have not had before, in ways we have not had before, thereby fostering new insights about our interconnectedness and our differences.

Gibson’s vibrant artwork asserts the complexity of identity, inspiring viewers to mine the brightest parts of their own life experiences, create from them, and express the stories of their own places of belonging. —Karin Wolf