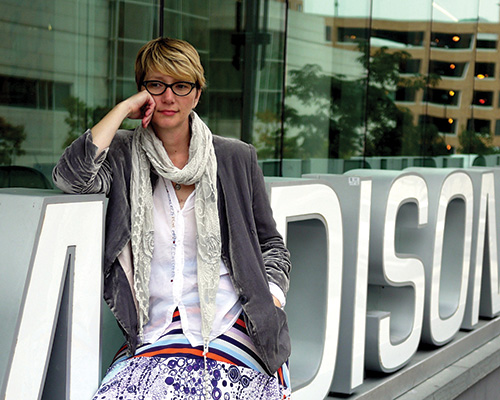 When I was coming out in Charleston, West Virginia, the only real way for me to find other lesbians seemed to be through books. There was one lesbian bar in town filled with much older women and, outside, men who’d hit on me as I walked to my car. When I checked a Rita Mae Brown novel out of the public library and the librarian told me it was a good book, I was terrified. I’d only convinced myself to check it out because I figured no one would know what it was about.

Luckily, I went to a women’s studies conference in Ohio—a big trip for me then—and got to attend a lesbian caucus. The leader of it said the word “lesbian” what seemed like a thousand times, and each time the recoil in myself and the women around me seemed to lessen, just a little bit. I think we all walked out of there still terrified of the word, of each other, and of ourselves, but also with the seeds of community and confidence, even pride, planted. It took years for the seeds to sprout and eventually thrive.

It was at that caucus that I got on the mailing list for Naiad Press. I ordered some books and devoured them in complete secrecy. Then I applied for a job at the Press. I still remember the day Barbara Grier called to ask me to come for an interview (or rather to tell me that I would be coming for an interview—the conversation was a torrent that swept me along). I ended up moving to Tallahassee and being part of a lesbian community for the first time. I had access to the largest library of lesbian books in the United States and got to hear stories from women who had been in the lesbian community and in the publishing movement for as long as I had been alive.

Around that time I became very interested in the writer Flannery O’Connor, a Southern Catholic writer who wrote darkly funny stories and died in 1964, when she was only 39. She had lupus and had lived with her mother on a dairy farm in Milledgeville, Georgia for most of her adult life. I read her collected letters and was struck by her talent, generosity and wicked sense of humor. I was also struck by the fact that she had a large circle of lesbian friends, which seemed remarkable for someone living in the middle of Georgia in the ‘50s. I couldn’t help but think that had she had more freedom, she would have had a very different life. So I took one of her characters, one that shared many of the particulars of O’Connor’s own life, and wrote an alternative life for O’Connor. The book that resulted is called The Book of Hulga. It contains illustrations by local artist Julie Franki and will be released by the University of Wisconsin Press on March 25, which would have been O’Connor’s 91st birthday.

I went from being a terrified, isolated, hillbilly lesbian to living for years where the only contact with the heterosexual world was brief conversations with the UPS man who always eyed the book World Without Men warily. I have also been immersed in the world of small press publishing and still forge connections inside that world. My first book was published by Arktoi Books, a lesbian imprint of Red Hen Press. Right now I’m designing lesbian poet trading cards for Headmistress Press, which has been a really fun way of discovering, re-discovering and sharing remarkable but neglected work. Right now, I am serving as co-director of writing programming at Arts + Literature Laboratory (ALL) in Madison. ALL is a community art space for visual, literary and performing artists to develop and share their work and create new connections. We are hosting a reading series, a small press lending library, craft lectures, exhibits, concerts, workshops and more.

I believe poetry can act as a vaccine, that you need to read a lot of it in advance of bad times so that those words are there to keep you company when you feel hurt and alone. I know that when people don’t have recourse to words already planted in their consciousness, they can feel as if there is no thread left to find their way back to the rest of humanity. Poetry, particularly lesbian poetry, has also led me to a life more rich than I could have ever have dreamed of. It opened up not only a space for who I already was, but it carved out a space for who I could become.