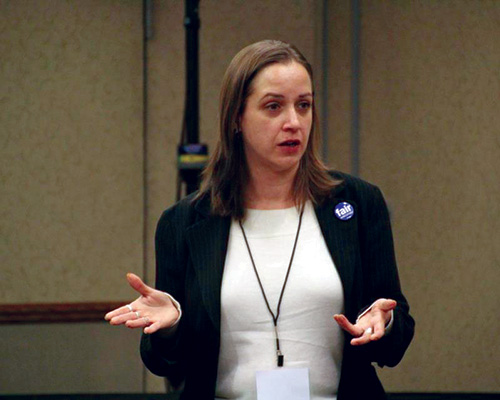 “I am a woman, but I can’t guarantee I feel like one; I suppose I don’t, or that I feel similar only to a subset of women who are a little bit more like me—bookish, practical, direct, and not into shoes. I’m supposed to be into shoes,” read Helen Boyd from her book She’s Not the Man I Married: My Life with a Transgender Husband (Seal Press, 2007). As a longtime activist for LGBTQ issues and gender equity, Boyd was a welcome presenter at FORGE’s April meeting. FORGE is a Milwaukee-based organization that provides peer support to transgender communities, including significant others, friends, family, and allies (SOFFAs) of trans* people.

For those not familiar with Boyd or her writing, she first published My Husband Betty (Seal Press, 2003), described by S. Bear Bergman as “a comprehensive and engaging overview of the world of the male crossdresser.” At that time, her partner Betty (a pseudonym) was engaging in what Boyd calls “cross-gender expression,” honoring Betty’s dislike of the “crossdresser” label. By 2007, when Boyd published She’s Not the Man I Married, which she calls “a memoir by someone who reads a lot of gender theory,” Betty identified as trans*. Boyd shared significant ambivalence in that book about the possibility of her partner transitioning. Thus several audience members at the FORGE meeting wondered what had happened to her and Betty’s relationship in the last seven years.

Now a gender studies professor at Lawrence University, Boyd emphasized that print lasts forever and the only thing consistent about her own gender is that it changes. In 2007, she and Betty “transitioned together” and are about to celebrate their eleventh wedding anniversary. In her words, “Relationships last as long as the people in them wake up and decide to be in the relationship that day.”

Boyd remains an ardent advocate for partners of trans* individuals, who she emphasizes do not have access to legal, medical, and social guides created for them. She finds the “get on board or decide to go” message that partners frequently hear to be overly simplistic given how significantly someone’s transition affects those closest to them. Boyd asserts that when their partners transition, many partners must grieve the loss of the person with whom they first entered into the relationship, noting that a partner does not necessarily share the sense of inauthenticity a trans* individual may experience before transitioning. She also shares her own process of working through profound anger when Betty transitioned. Calling this “spiritual/psychological work,” Boyd speaks of learning not to blame Betty for her transition since it is not something people choose to do. Instead, she could be mad at the transness when she needed to be and embrace her partner throughout the process. “Things are more complicated than liking everything all the time,” Boyd asserted, revealing that she is still in love with the guy she first met and that, at times, Betty misses being him too. To offer more support for partners, she runs an online group and message boards specifically for them.

That Boyd welcomes all partners of trans* people in the groups she moderates signals her commitment to more inclusivity and less gatekeeping within LGBTQ communities. While acknowledging the need for safe spaces for marginalized social groups, and trans* individuals in particular, Boyd objected to the frequent exclusions that occur within LGBTQ communities due to misguided assumptions and someone not wearing their queerness on their sleeve. Female partners of trans* men, for example, do not necessarily identify as straight but often are read that way when entering into queer spaces with their partners. She also described going into an LGBT center and encountering staff who did not know what to do with her identities. As Boyd wrote in her second book,

I appreciate Boyd’s attention to the intense hurt that exists in trans* communities—communities that she insists include the people who love trans* individuals. Instead of converting that hurt to horizontal anger that we take out on each other, she asked us to focus on changing external factors, like institutionalized discrimination, which cause great harm to trans* people and their allies and put a lot of pressure on the relationships that include trans* partners. She also reminded us that service and compassion are the heart of social justice activism. To give her the final word (from She’s Not the Man I Married), “I’ve had more than one person tell me how courageous and strong I am, how brave and cutting-edge. I’m not any of those things. I’m just another person living my life and trying to make my way in the world, a person who has found out that love is complicated and life is difficult, but that companionship is worth all the king’s ransom.”

Connie North has an MS in marriage and family therapy and a PhD in education. She uses a mindfulness-based, justice-oriented approach and has taught and written about LGBTQI, equity, and diversity issues.

Connie North | FORGE | Helen Boyd | My Husband Betty | She’s Not the Man I Married: My Life with a Transgender Husband | SOFFA