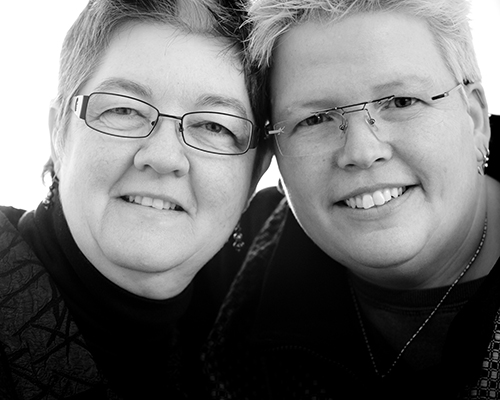 It is difficult to know how to share my story of love without sounding too churchy. LGBTQ folks, me included, are incredibly skeptical of church talk – primarily because religion has so often been used as a bludgeon with which to beat us straight, literally.

But the truth is that my story does start in church, and I must begin there.

I was not raised United Methodist; it was a denomination I chose. I began attending the River Falls United Methodist Church while I was in college—the attraction was almost immediate. I resonated deeply with the United Methodist understanding of grace, their open communion table, and their four-fold focus on Scripture, tradition, reason, and experience. I was enthused by their long commitment to theological openness and their emphasis on social justice. I was inspired by Methodist founder John Wesley, and his devotion to the poor and the outcast and for his willingness to preach the Gospel in all the wrong places to all the wrong people.

It was official. I was in love with the United Methodist Church.

Some years later, my pastor offered a new 34-week Bible study program. There were 12 of us in the class, like little disciples. Those were important weeks for me. During that time, I began to discern a call to ordained ministry and I fell in love with Val, one of my fellow classmates.

This was the beginning of a transcendent and turbulent time.

My relationship with Val quickly grew into the most beautiful, tender, mutually supportive connection I’d ever known. I wanted everyone to know about the love we had found, but there was a problem. As one who wanted to enter ordained ministry, our love needed to be kept secret.

But, my love for Val and my love for the church were inseparable: one sprang from the other. Both were life-giving and sustaining, grounded in a deep sense of faithfulness and loyalty. To have abandoned either love would have meant silencing the movement of the Spirit in our lives.

Our relationship was filled with wonder, excitement, and joy—but also with fear: a profound and paralyzing dread that we might be “found out.” With family and friends and certainly at church, we maintained the pretense that we were just friends. We were careful not to sit too close or hold our gaze for too long. We only took walks at night, in the dark, and were physically affectionate only when we knew we were alone.

About six months after we started dating, we were on vacation in a secluded place. As we stood outside, sharing a kiss, I was aware that it was the first time we had kissed in the sunlight.

Eventually the immediacy of the fear began to subside a bit and we were able to come out, very privately, to people close to us. In seminary, we found a trusting community—and by the time I was ordained, many of my colleagues and supervisors knew I was gay and had met Val.

The few places where we could express the fullness of our relationship were precious to us. And yet, those times of authenticity also emphasized the many areas of our lives where we were still required to pretend.

I was ever vigilant, spending inordinate amounts of energy trying to figure out if new friends, colleagues, or neighbors were friend or foe. Could we tell them? Would they accept us or judge us harshly? Such a bifurcated existence was crazy making—trying to discern which places were safe and which were fraught with danger. Not knowing how we were going to be treated was dreadful.

Even when we found a sympathetic person, the specter of losing the church I love always hung over my head. The rules of the church were clear; being gay and partnered and ordained was a “chargeable offense.” Anyone—clergy or layperson, friend or stranger—could file a complaint and such a report could lead to the loss of my clergy credentials.

I tried to keep this part of my identity hidden. As a result, I kept myself at a distance from my parishioners and colleagues—afraid they might ask me questions about my life. I remember one clergy gathering where we were supposed to ask the person next to us a couple questions about each other’s lives.

And as I turned to my conversation partner he immediately said to me, “Amy, tell me about the most important thing in your life.” I wanted to tell him about Val, but I couldn’t. I wanted to tell him about her two children whom we were raising together, but I couldn’t. So I talked about my cat. Now aside from looking profoundly superficial—the most pathetic part was that I didn’t have a cat. My life and my loves had been reduced to telling make-believe stories about a cat I didn’t have.

As I entered ordained ministry, I naively thought I could be fully present to both Val and the church. I was wrong. I never stopped feeling pulled, almost in two—torn between the Church that I love and the Val that I love.

Living a divided life was taking its toll. The church had set up a duplicitous system. I could be ordained and appointed to pastoral ministry, but I had to pretend I wasn’t gay. The church was glad to use my gifts, my talents, my time…as long as I kept one foot and all my mouth in the closet.

In the midst of such oppression, an evolution began within me. I knew, and had always known, that my sexual orientation and my love for Val were gifts from God, both of them. It was time to be authentic. And, if there was any shame to be placed, it was on the church for requiring me to deny my true self and to lie in order to preserve my job.

What had begun as a slow trickle became a torrent. I came out and began speaking my truth. In her book, The Dance of the Dissident Daughter, Sue Monk Kidd says, “The truth may set us free, but first it will shatter the safe, sweet way we live.”

And so it has. In a little over a year, I left the local church and began a new kind of justice-oriented ministry. I lost my clergy salary, my parsonage, my health insurance. And most recently, I was dually charged with being a “self-avowed, practicing homosexual” and with performing a holy union for a same-gender couple. I underwent a church trial in June of 2011.

The website that was established to keep people apprised of the trial process is called LoveOnTrial.org. This was and continues to be a fitting title. The love of LGBTQ people is so often trivialized, disregarded, invalidated, often in the name of God. I was put on the stand in front of a jury of my peers (other ordained clergy) and questioned about the nature of my relationship with Val, about our life together, and our feelings for each other. I was even asked intimate questions about our sex life (questions I refused to answer). Love on Trial, indeed—our years of faithfulness and devotion, promise, and passion were reduced to questions designed to implicate me in what the church calls “prohibited conduct.” (Editor’s Note: To read more about Rev. DeLong’s trial and the innovative sentence handed down by the trial court, go to LoveOnTrial.org.)

I was talking to a straight clergy friend a couple of months ago. He said to me, “I would be more demonstrative in my support of LGBT rights, but I don’t want to have happen to me what happened to you.”

My immediate thought was, “You’d be so lucky.” My days of having to do a cost/benefit analysis before I speak my heart are over. I don’t have to lie about who I am, or compartmentalize, or tell make-believe stories about my cat. It might be tempting for some to see only what I’ve lost. But that is not the economy by which I live. Most days, I can only see what I have gained—my integrity, comfort in my own skin, a deep peace that comes only from having gone through hell and emerged, not in ashes, but whole and fully alive.

The fresh, fragile love that kindled in Val and me all those years ago continues to sustain us, fills us with joy and gratitude, and gives us courage and strength for all that is yet to come.

After the trial was completed, Val and I were quickly ushered into a press conference. As we held hands and exchanged a kiss in front of the intense lights of television cameras and the bright bursts of flash bulbs, I was keenly aware how far we had come from that first kiss in the sunlight more than 16 years earlier.