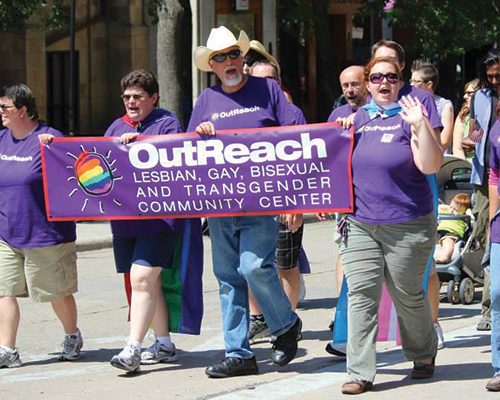 OutReach, Madison’s LGBT community center, is stepping up to set the stage for Madison’s 2014 pride celebration on Sunday, August 10, with a parade tentatively scheduled for 2 p.m., followed by a Capitol Square rally at 3 p.m. This year’s parade route will take the event down Williamson Street for the first time. An open invitation is being extended to the community’s bars and other organizations to put together associated events, such as a weekend block party being planned by WOOFs.

“We thought that when we don’t have a parade, that the community really suffers for it,” says OutReach Executive Director Steve Starkey. He noted that OutReach had been approached to take the lead for the weekend by several community leaders—including Our Lives’ Patrick Farabaugh, PFLAG’s Nancy Jones, and Fair Wisconsin’s John Smallwood—in the wake of the disappointment that followed last year’s decision not to hold a parade.

Starkey sees this as an important time in our local struggle for LGBT rights, when the visibility and public education that comes with a parade are more crucial than ever. At a time when Wisconsin may soon be surrounded by states that embrace same-sex marriage, there are also other motivations for making a powerful statement here. This is a place where the nation’s first statewide gay rights law passed in 1982, but where the embrace of challenges, like turning back the 2006 passage of an anti-gay Constitutional Amendment, demand a call to renewed action.

“Governor Walker’s statement that he ‘didn’t see a gay rights movement for gay marriage’ in Wisconsin must not go unanswered,” observes Starkey. “I think that Fair Wisconsin, other activists, and certainly OutReach, have promoted gay marriage and informed the community about what’s happening locally and nationally. I think there is a strong gay rights movement in Wisconsin, particularly in Madison and Milwaukee, but also statewide. If he’s not seeing it, he’s just not looking, and that’s just one reason why the visibility that comes with a parade is important.”

While gay marriage is presently front and center, Starkey said it’s important to remember that our struggle for equality is far from complete in many areas. Rights like second parent adoption and statewide protections for transgender people still elude us, he says. In recent years, OutReach’s mission has turned increasingly toward a focus on economic justice and efforts to advocate for institutions that are culturally-sensitive to LGBT people’s specific needs. For OutReach, that means countering the disproportionate incidence of homelessness in LGBT communities and meeting the special needs of older LGBT community members. These are also reasons for our community to march on August 10, he says.

“Despite the stereotype, not everyone who is LGBT is affluent with lots of disposable income,” Starkey says. He notes that the downturn in the economy that has hit communities of color especially hard (including LGBT people of color) has also had a disproportionate impact on folks who face the added consequences of both sexism and homophobia.

Starkey points out that many people in our community don’t have the support of their families of origin to the same extent as their heterosexual counterparts. “So that’s why our created families are so important,” he says, “and that’s why it’s so important for all of the groups and individuals in our community working to advance LGBT rights come together in a spirit of solidarity and celebration at a pride parade.”

It was 25 years ago—on May 6, 1989—that Madison hosted its first major march for LGBT rights, an anniversary that will be marked later this year by a gathering of original march organizers still being planned. Despite the unseasonable cold (it snowed that morning), almost 8000 people turned out for a parade led off by dykes on bikes, that also included supportive churches, student groups, businesses and allied social justice organizations, and children from families in all forms marching side-by-side with their parents.

The hundreds of volunteers who came together to make that weekend possible were never able to coalesce in quite the same way again. About 3500 people, half the original number, showed up two years later in October 1991, for an event planned on a similar scale.

Waning interest in pride weekends was likely further explained by community energies that were now being applied in a growing diversity of new projects and organizations. For the majority living an increasingly comfortable existence made possible by the fact that Madison’s LGBT citizens have had great success in weaving ourselves into the larger fabric of the community, these were factors that tended to diminish the significance of an annual pride event in the minds of many.

And yet Starkey returns to the reasons why he and others at OutReach just couldn’t stand to let the tradition of an LGBT pride parade die. As with the feminist movement, and other civil rights movements, he believes that many young people have no idea of the path that’s been laid out for them, through the history we honor each year at pride.

“We’ve come a long, long way, and I think that people who are twenty-something or thirty-something don’t always know that. It’s important that they learn about this history, because it helps them figure out the way forward,” he adds. “While we’ve come a long way, it’s clear we still have a long way to go. It’s still vitally important for us to come together at times like August 10’s pride weekend, to celebrate and chart the course ahead together.”

John Quinlan is a longtime LGBT community activist and journalist. He is a past co-chair of GALVAnize, which produced the 1989 march, and a former director of OutReach.