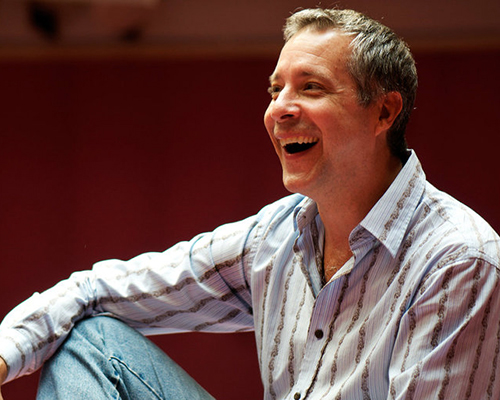 It chose me, I didn’t choose it. That’s a pretty accurate description of how I came to acting. I think it was born from my innate desire to be loved and to please.

Watching home videos of my early childhood in the Midwest, one sees an incredible amount of energy pouring forth from this spastic toothpick of a kid. Energy emanating in all directions at once, often without focus. A director once told me he thought I’d never be truly successful because I had all the traits of a happy puppy. I was in Wisconsin when I completed my undergraduate acting degree and found out I was accepted to New York’s Circle in the Square Theatre School. So I was off to New York for three years and Los Angeles for five years, with a stop-over in D.C. for a year. Along the way, there were also two independent films, a shot at television, and a stint with a Shakespeare Company.

In the fall of 1992, my partner and I left Los Angeles to move back to Madison. Spirits were high. We all believed in a place called HOPE. Les Aspin (remember him?) was tapped to be Secretary of Defense in Clinton’s White House. Donna Shalala was chosen to be Secretary of Health and Human Services. Both the Packers and the Badgers were on top. Wisconsin seemed like the place to be, and Madison seemed like the best place to live. As an Equity actor and member of the Screen Actors Guild of America, it is hard enough to find work in New York and L.A., but in Madison, Wisconsin? My agent in Chicago said he couldn’t do a thing for me unless I was willing to go back to Los Angeles. I didn’t care. I’m one of those strange creatures that believes you can have it all—just not necessarily what you want, when you want it. This is a lesson that was a long time in the learning. I had a home and a relationship. I had a “day job.” Now I had another journey to complete, a journey to myself. I had to find a true purpose, or rather let that true purpose find me.

In 2007, I auditioned for Jennifer Uphoff Gray for her production of “The Diary of Anne Frank” here in Madison. At the time, I was appearing as Atticus Finch in the Children’s Theater of Madison’s production of “To Kill A Mockingbird,” which Jen had just seen. At the audition she commented that my character, Mr. Van Daan, had a very different energy from Atticus, and asked if I could read the scene again with more impatience and the desperation to have a cigarette. When I finished she said, “I’ve never seen an actor do a 180 that quickly. Thank you.” Music to any actor’s ear is that they take direction well. I got the part and so began a deep relationship with this powerhouse of talent. Jen and I went on to work together again for Milwaukee Shakespeare Company on a groundbreaking and critically acclaimed production of “Love’s Labours Lost.”

Fast forward two years. The Madison Repertory Theatre closes and the city is left without a resident Equity company. Celia Klehr, a dear personal friend, a fierce advocate of the arts, and a veteran actor, hosts a St. Patrick’s Day gathering, inviting many of the area’s finest theater professionals. From that party grew an interest in a more formalized discussion of the state of professional theater in our city.

A New Star is Born

The following week, Forward Theater was born around a dining room table in the Klehr/White household. Local actor Michael Herold came up with our name and the illustrious Colleen Burns urged the newly formed company, immediately and without hesitation, to name Jen Uphoff Gray our artistic director. We were off and running and the company quickly grew to include a board of directors, a staff, and an advisory company. We joke that Forward Theater Company is like the federal government: We have three distinct entities that keep power and artistic considerations in balance. The 24 members who make up the FTC family are dedicated to our mission of establishing “a home base for Wisconsin theater professionals that will expand the economic and cultural life of the greater Madison area.”

Forward’s first season, which was dubbed by one local paper the year of “Torture, Abduction, and Bette Davis,” was launched last fall and included a staged radio play of “All About Eve,” starring Colleen Burns and adapted from the original Lux Radio Hour Show by FTC’s resident impresario Jack Forbes Wilson. We followed this auspicious debut with the regional premiere of Christopher Durang’s latest black comedy, “Why Torture Is Wrong, and the People Who Love Them.” Advisory company member Sarah Day stole the show with her portrayal of Durang’s demented matriarch. We ended the season with a powerful and moving staged reading of a new work, “Kiritsis,” by the late Madison playwright David Schanker. Advisory company members Sam White and Jim Buske delivered engaging performances in this bittersweet drama.

I’m so looking forward to this show, which promises to delight and perhaps shock local audiences. No doubt it will “stimulate” discussions about the journey to self-discovery and the often-wide chasm that exists between women and men as they attempt to forge full and rich lives together.

And so, the reoccurring themes of my life have come full circle. My desire to please and be loved—sometimes as an over-exuberant puppy, who gets his nose swatted with a rolled-up newspaper—don’t stop me from bouncing back. The unfocused energy is finding a path with the dedicated people who make up my Forward family. And I try to keep the drama of my life on the stage where it belongs, as I face each day, one at a time. Please visit forwardtheater.com for more information about our upcoming season.