My Gender Is Indigenous 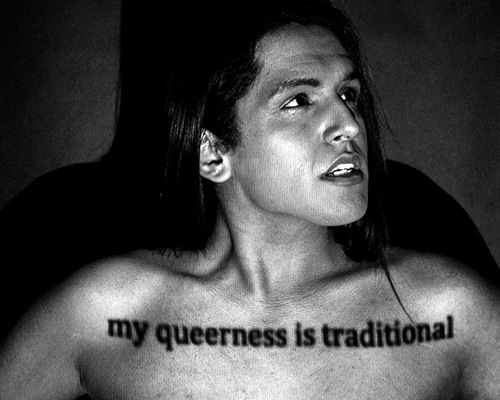 Tell us a little bit about yourself!

My name is Ryan Young (They/Them/Their). I am Ojibwe from the Lac du Flambeau reservation in northern Wisconsin. Right now I am in my final semester as an undergrad at the Institute of American Indian Arts in Santa Fe, New Mexico, with a major in Photography and a minor in Performing Arts. In my spare time, I am a contributing photographer to Native Max Magazine, an Indigenous fashion magazine based out of Colorado. Recently, I wrapped up a summer internship at the University of Illinois at Urbana-Champaign. I worked with the Native American House, LGBT Resource Center, and Housing as the Coordinator for Two Spirit and Indigenous Programming.

What first attracted you to making art, and in particular, the kind of art that you do? What role does it play in your life and why is it important to you?

I used to love making art as a kid. When I was in grade school, I had a negative experience with my art instructor in regards to something I created, and decided to no longer take art classes.

Throughout high school I continued to draw and teach myself new mediums. When I first started college, I had planned to major in Psychology, but wasn’t really interested in many of the classes I was taking. After taking a break from school, I bought my first camera and started taking photos of my friends and family to gain experience. When I pursued my BFA at the Institute of American Indian Arts, I also fell in love with printmaking, digital art, and performing arts. In preparation for my senior show, I am working primarily in photography, but experimenting with text on the body, either through projection, printing ink on the model, and even adding beadwork to photographs.

Art making is important to me because a lot of it has to do with empowering my identity as a Two Spirit person, and wanting to create work that teaches and empowers other queer, Indigenous people. Social media has made this work more accessible, especially through the use of hashtags. I want my work to be accessible to the folks this work is created for.

Talk about the importance of your indigenous heritage and why you are focused on weaving it into your artwork?

I focus on incorporating my queer and Indigenous identity into my artwork, because it’s who I am. My experiences in this world are as a queer, Indigenous, Two Spirit person. I grew up experiencing a lot of homophobia from inside and outside of my tribal community.

In high school, I was always told I didn’t look “Native” enough by non-Native peers, despite growing up and being involved with my community. When I first came out, I had a conversation with someone who was also queer in my community. They discussed their own struggles and essentially left me with the idea that I would have to either choose to be queer or Indigenous, as it was too hard to try to navigate this world as both.

In college, I researched queerness in Indigenous culture and learned about the multiple gender identities in various tribes. Even the term “Two Spirit” is a translated Ojibwe term. As I’ve continued to do this research, it has inspired a lot of my artwork to focus on both queerness and Indigenous identity, as they are not separate entities. Precontact, being Two Spirit plays a role in how I would have contributed to my community, and different gender and sexual identities were more accepted before the influence of colonization and religion.

How did you find out about the Two Spirit wool blanket contest (for Eighth Generation in Seattle), and how does it feel to be chosen to create the piece?

I follow Eighth Generation on Instagram. Initially they put out a survey to see what kind of concepts and design aspects should go into the Two Spirit blanket they were creating. About a month later, they put the call out for Two Spirit artists to contribute a design to be considered for the blanket. Many of my friends sent or tagged me in the post and motivated me to contribute a piece of work. I submitted a photo of a painting I created, and after a phone call with Louie Gong to discuss the meaning of the artwork, my work within the Two Spirit community, and the importance of this project, I was selected as their artist. I feel honored and humbled to have this opportunity to represent my community and work with an Indigenous-owned business like Eighth Generation.

What does it mean to you to identify as Two Spirit? What misunderstandings do you feel the general population—or even your own community—have about that identity?

I identify as Two Spirit because it connects me to my culture. Two Spirit is a term translated from my tribal language (“Niizh Manidoowag”) and recognizes the existence of Two Spirit people in the Ojibwe community. While it is a pan-Indigenous “umbrella” term for gender and sexuality, we must acknowledge that not every queer Indigenous person identifies as Two Spirit. There are multiple communities with their own words for various gender identities that align more with how individuals identify themselves. There are even additional terms for gender in Ojibwe culture beyond it.

While homophobia and transphobia exist everywhere, seeing this knowledge and recognition of gender fluidity in Indigenous languages show that it hasn’t always been there. By learning and owning my identities and finding their place within our traditional culture, I rebuilt my relationship to my cultural identity that had been impacted heavily by being bullied for being queer. My artwork reflects this desire for agency and self-advocacy by reminding other Two Spirit folks that our queerness is traditional, and that we need to see the power that these identities once held, instead of the shame that Western beliefs try to push on us.

I feel the biggest misunderstanding is through the appropriation of Two Spirit identity by non-Indigenous folks. Recently, Jason Mraz had an article about him finding his “Two Spirit” identity to recognize his love for both men and women. The article showed me how little work he did to research this identity before attaching himself to it. Two Spirit isn’t just about sexuality. It’s about gender identity and its origins are rooted within not just Indigenous culture, but specifically Ojibwe culture and it connected these identities and your role in helping your community.

Additionally, there are so many Western terms that exist to identify various sexual and gender identities that don’t have a cultural context that can be used. I know that for some folks, it’s a journey in itself to find which words fit best for your identity and how you want to be acknowledged. Identifying as Two Spirit when you are not Indigenous strips it of its cultural significance and its purpose. We have to take it upon ourselves to truly understand what those words we choose to recognize ourselves mean and their history before we take something that does not belong to us.