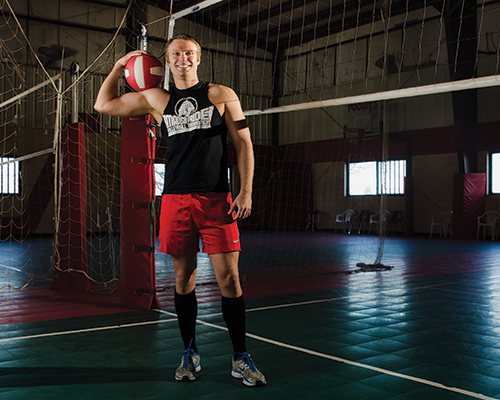 Community: That’s what I was looking for when I attended my first volleyball match with the Madison Gay Volleyball league. I left a life of routine to venture out on my own as a gay man in his 20s when I took the leap and moved to “the big city” (as I called it). It was one scary task for this small town boy. I had visited Madison before, and knew of its close-knit LGBTQ community, but was finally ready to throw myself into it.

Since coming out I had always been involved in the community. After all it had done for me and others around me, I felt a pride and a wanted to give back and help others. Moving to Madison meant starting over with a lot of that though.

I wanted to get a foothold in this new community so I decided if there was an organization or function happening, I wanted to check it out. One of the first things I did was look into local LGBTQ sports organizations. Being someone who recently found himself back on the road to a healthy lifestyle after being overweight, it was a perfect match!

After talking with some of the new people I had met, I decided to tag along to check out their volleyball league. Sitting on the sidelines and observing the matches and the fun people had from just being together brought a smile to my face. You had everything from beginners who had never played to athletes who were pros and playing with a well organized team. What brought them together were the initial friendships they made, and what kept them coming back was the community they developed. That initial impression from my first visit was so amazing that I gathered friends, formed a team, and registered us that week.

Throughout the season I made many friendships and found myself with the good foothold I was looking for when I took the scary jump to the big city. I also managed to be elected team captain, which put me in a place of leadership.

Since the league’s creation (well before my first year of playing), it has changed venues, formats, board members, and more. What remains the same throughout is that the league itself is open to all who wish to participate. They do not discriminate based on orientation, gender, age, etc. If you register and want to play, the board will do everything in their power to make sure you find a team fit for your skill level. There are currently two divisions: one for people who want to play competitively and one for people just looking to have fun or who have never stepped foot on a court and want to learn.

After years of seeing players come and go and seasons pass, I decided to take that leadership role and try to do something to show the community what volleyball brought to me and what it could bring to them. With Madison Capitol Pride suffering, I decided that organizing a tournament might help bring something revitalizing to the weekend’s festivities. If I could help make just one person’s transition into this community a bit easier, then I wanted to try.

With the help of a few friends and volunteers, we set up contacts within the league in Madison and the sister league in Milwaukee and started to advertise and organize the tournament. We wanted an event where all were welcome and a place that had a safe, competitive feel. The response we got to the invites we sent was amazing! People were just as excited for a community event as we were. That first year we put together a nonprofit event in a park on a sunny day, where all community members were welcome. There were music, spectators, games to be played, and medals and trophies to be handed out. Most importantly though, there was love and laughter.

We are now heading into the fifth year of the Madison Pride Volleyball Tournament and have grown so large we needed to hold it at a paid venue that is large enough to handle the event and its participants. I could not have dreamed of the ripple effect that one man’s idea could have created. We have business sponsors, people traveling from different states, and so much community that it is overwhelming. People that had never played before because they were too shy felt so welcomed that they wondered why they hadn’t come sooner. They saw a community coming together just to show support—and love. I can relate. As a guy who could barely hit a ball when I first joined, I was greeted by people helping me up and teaching me how to be a better player.

Some people are scared to try something new, like playing a sport they have never played before. I was too, but what helped make it easier was seeing others make mistakes, laughing with them, then being taught how to improve their skills. The people teaching them and helping them were their friends. I hope to continue sharing my experience with others in the LGBTQA community for years to come so that others might find that same sense of community too.