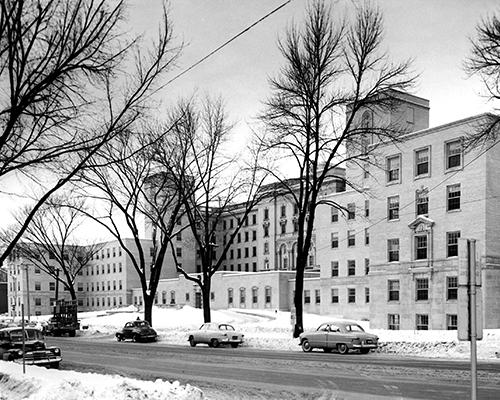 The early 20th Century was the period when the police were looking for homosexuals as criminals and the lens of police reports can be used to find evidence of gay life. Though it does not seem so today, the advance on the criminal model of homosexuality was the medicalization of homosexuality. Allan Berube in Coming Out Under Fire: The History of Gay Men and Women in World War Two details how the army doctors began to deal with homosexuality as an illness. Berube shows the psychiatrists and military researchers had a wide range of attitudes toward homosexuality, and some were even sympathetic, but it was still discussed in a medical context as how to treat an “illness.”

The sicko diagnosis was not readily accepted by gay people in Madison, even when it was the predominant model. Two researchers did a homosexual study of military personnel at Truax Field, a military base during World War II. The researchers were Dr. E. L. Sevringhaus, a doctor and researcher at the University of Wisconsin, and Major John Chornyak, associated with the Army Air Force Regional Hospital at Truax Field.

Dr. Sevringhaus, a 1921 graduate of Harvard Medical School, was a campus professor and specialist in endocrinology and metabolic diseases. He also assisted the United Nations Relief and Rehabilitation Administration in post-war Italy. Major Chornyak was from the Pittsburgh area and was here only during the war. The study published in Psychosomatic Medicine in September 1945 included 21 homosexual male patients and another control group of seven men “with no reason to suspect homosexual behavior in the group of controls.” All were from “the same psychiatric ward …” presumably at Wisconsin General Hospital on campus.

The method of study was to do bioassays on urine samples collected three times in a 24-hour period. The researchers were looking for an endocrine disturbance. The assumption was, “it seems worthwhile to attempt to devise methods for studying this type of psychosomatic disorder rather than to assume that it is merely a perversion of mental or emotional status which is not amenable to the methods of chemical and physiological investigation.”

From the study the authors concluded, “It is obvious that our data do not lead to any explanation of homosexual behavior but they do add to the conviction that there is an endocrine disturbance accompanying such behavior.” The authors noted that of the homosexuals only six “had any physical suggestion of partial feminine type or of adipose-genital dystrophy. None of them was truly feminine or infantile.”

What is interesting about the study is not the inconclusive science but what it reveals about gay people of the period here in Madison. As soldiers, the men were a young cohort with an average age of 23 in a range from 19 to 31. The authors noted them as “overt homosexuals.” They further noted, “Our subjects were all definitely aggressive in their homosexual activities …

“During the psychiatric study, they were asked to write their own stories concerning their sexual habits. All these cases were extreme types and had been aggressively homosexual both actively and passively since late childhood and early adolescence.” No innocents here.

In another aside the authors noted, “They had participated apparently without conflict in a wide variety of homosexual practices. These homosexual stories were remarkably similar.”

The men “voluntarily brought their homosexuality to the attention of the Chaplain, Unit Commander or Medical Officer. They all expressed difficulty over their sexual excitation because of the stimulation that resulted from their living closely with other soldiers.” So many gays-in-the-military arguments are foreshadowed here.

Yet these guys knew who they were, were comfortable with it, and realized the situation that they were in. The authors noted, “In none of these cases was there a true neurotic type of conflict over homosexuality as such. They expressed a realistic anxiety that their homosexuality would lead to court martial.”

They apparently did not accept the sickness diagnosis of homosexuality. The authors concluded, “The cases would be considered extremely questionable from the standpoint of profiting from any therapy; in fact therapy was not requested or desired by any of them.”

And a key description about the positive outlook was, “Four were known to be members of an organized group.” This insight from 1945 is followed by another study presented Oct. 9, 1948, before the Midwestern Association of College Psychiatrists and Clinical Psychologists and printed in May 1951 in The Journal of Nervous and Mental Disease titled “Homosexuality Among University Students.” (In this case, all the students were from UW-Madison.) The article was later included in The Homosexuals: As Seen by Themselves and Thirty Authorities published in 1954. The author was another M.D.: Benjamin H. Glover associated initially with the University of Wisconsin Student Health Department and later the School of Medicine.

Dr. Glover begins by observing that, “Since the war there has been a noticeable increase in cases of homosexuality as well as other socially offending sex cases among the general type of psychiatric problems seen in the University of Wisconsin Student Health Department.” Thus he places his study in the post-war medical context.

Dr. Glover stated, “Fear, of course, is the basic mechanism which drives patients to doctors. In the case of these individuals, who are usually first seen in a homosexual panic, there is intense fear of being caught, of being noticeably different …”

It was believed that the student health service could present itself as a “non-judicial psychiatric staff” so that homosexuals could safely present themselves. Nevertheless it was noted patients would make cautious inquiries as to confidentiality and any connections to disciplinary bodies.

This caution extended so deep that “Little was accomplished during the first two or three interviews except for inaccurate, frequently contradictory records, which were corrected through several future visits, changing ‘no affairs’ to ‘a few childhood experiences’ to ‘innumerable nights of intimacy’…”

From 52 cases seen in a year of assorted “sexual deviations,” the study selected 12 “as true homosexuals—that is, overt performers of deviant sex practices with their own sex by reason of personal choice, without coercion, with enjoyment—who frequently sought the haunts and company and engaged in the activities of other homosexuals.” Again ages ranged from 19 to 31 with one exception at 42. Six were veterans. The study acknowledged there were “a large number of well-known homosexuals on campus.”

The author noted of the selected 12 cases, “All, however, noticed they were different from others of their age group in childhood, and definitely in a different social category after puberty.” And further, “Organized sports were untouched by this group, rarely even as spectators.”

The Capitol Square was listed as a favorite place for pickups along with taverns and bars. “Acquaintance through usual social channels is more difficult except on the group frequenting musical and dramatic performances.” Tchaikovsky was observed as a special favorite, perhaps even then known as a family member.

Dr. Glover was not at all fully accepting of homosexuals as he talked about the “evidence of the basic medical differences between homosexuals and normal individuals.” And further, he noted “a large schizoid element in their personality.” Though this was after observing their not-irrational fear of being caught.

The student health service offered direct psychotherapy as a means to a cure. Though Dr. Glover did note some research that showed “male homosexuals do not want to change except for the fear of social penalty,” he nevertheless had an extensive change therapy described in detail as a “long-term therapy plan.”

Yet, of his sample of 12, only one made “significant improvement during one year of this type of psychotherapy.” The rest stayed true homosexuals rather than succumbing to the “cure.”

The failure to convert sexual orientation resulted in “no scholastic or psychiatric casualties in this group.” And early on the study noted, “Socially, these patients attained a fairly significant status.” So, resisting the prescribed medical treatment, they continued to lead their lives.

Together, the studies from the late 1940s show that in post-World War II Madison there were lively gay social circles, and some gay folks in Madison led such determined lives and so presented themselves that they rejected the notion that homosexuals were sick and likely subjects for treatment or cure.