Our Bodies, Our Selves 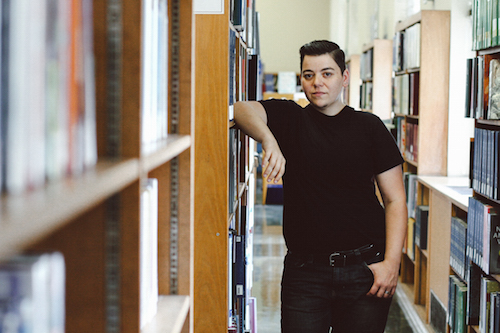 Madison is home to one of the only certified sexological bodyworkers in the Midwest (and to our knowledge, the only one in Wisconsin), Sasha Lasdon, a Madison-based somatic sex educator, intimacy coach, and certified sexological bodyworker. Their business, Integrated Eros, is open to people of all sexualities and genders, though by virtue of Lasdon’s own identity, training, and personal erotic embodiment experiences, they inherently practice with a queer lens. Lasdon teaches workshops at A Woman’s Touch and co-facilitates courses with Miriam Hall of Herspiral Contemplative Arts. Lasdon’s work is informed by 14 years in massage therapy and 15 years in dance and movement.

Resource sharing, navigating relationship structures (including non-monogamy and polyamory), other pathways to pleasure through sensory play and kink, ritual, and finding modifications to adapt to pain or physical limitations are also encompassed by their services.

Given that their home base is in the Midwest, sexological bodywork seemed to culturally make the most sense. In sexological bodywork, touch is unidirectional (practitioner to client), the practitioner remains clothed, and gloves are used if contact is made with genitals or mucus membranes. It’s touch with the purpose of education, and allows the client to receive and focus on their own experience, which in itself can be profound.

Lasdon describes sexological bodywork as “a pathway for an individual to get to explore their own sexuality through guided, hands-on work” through their coaching and education services, “with the underlying notion that pleasure can be healing, that pleasure is our birthright, that pleasure is worthwhile on top of all the things.”

Amy Butcher, Lizz Randall, and Alex Jade are the other three members of Body Trust. Together they weave experience from education, social justice, creative arts, ritual, and holistic non-binary tantra into their work, which includes workshops, virtual events, and Pleasure Lab podcasts. They also include newly developed publications to be released in 2017: an illustrated coloring book, Wonder Body (by Butcher and Jade), and a literary journal of somatics, Erotix (edited by Sexsmith). Many of these formats make the work accessible across distance, though Sexsmith does plug the irreplaceable value in doing in-person work with others in workshops, too, for the reason that the erotic self is developed in relation with other people. For example, in July, the annual Body Trust Portals of Pleasure retreat is taking place in New Mexico, where participants from many miles apart will be gathering, including some with Madison ties.

The other piece is the incorporation of the sacred. “I think where the sacred comes in is that the practitioner has a sacred practice to keep their body and their senses attuned to themselves, to the world, to the greater energetic, spiritual context, whatever we want to call that,” Sexsmith explains.

The practitioner must take care of their body and spiritual well-being. Tantric principals and “foundation stones” such as meditation, detox, nourishment, and movement all lend to keeping the body honed as a tool for the work; the practitioner interacts from a “helpful” rather than “personal” place.

Though Lasdon has a spiritual practice of their own and has trained with folks from Body Trust and as well as shamanically-oriented Raven Kaldera, they keep the spiritual element more in the undercurrent given that clients may have differing beliefs.

“If I were to talk about spirituality and sexuality, the realm of paradox is my favorite,” Lasdon said, adding that “being articulate does not negate mystery.” There is space for both — to be concrete in naming and expressing desire, the body, negotiations, and also allowing for the space between, the unknown, the experiential that exceeds definition.

In the dance between Mystery and articulation, those who can mediate with words are also expanding the field in important ways. People do need language to some degree to relate to and relay experiential information. Enter Sexsmith, the Body Trust “Word Top.”

Part of the beauty of Body Trust and Integrated Eros are the ways in which these practitioners blend their gifts from various passions in life.

“As an erotica writer, diving into the body and into the energy of the body has been adding depth to my sex scenes — or so I hope!” says Sexsmith. “I see it that way, anyway. And as a practitioner and sex educator, part of my particular gift in that arena has been to work deeply with the words. Often, the body-based people who pursue somatics don’t go as in-depth with written or spoken language, so sometimes it’s very hard to articulate what happens in the energetic processes. I’ve been working deeply with my friends and colleagues and mentors to try to encourage more articulation about this work — in things like the Body Trust podcast, Pleasure Lab, and our forthcoming journal, Erotix.”

Beyond Body Trust, Sexsmith’s byline may also register with a certain demographic of readers. I was first exposed to Sexsmith many years ago when I was newly out; Sugarbutch Chronicles led to many “aha!” moments for me, and later, Sexmith also authored well over 35 “View From the Top” articles for the website Autostraddle. The experiential nature of their writing naturally lends to a vicarious (if not voyeuristic!) experience for readers, which can be fodder in itself for forays into erotic embodiment. Just to say, the entryways to this work can appear in many forms, and there are just as many ways to say “yes” if you so choose.

Especially for queer folks — understanding that includes a wide array of differences and experiences — there are certain themes that are collectively and qualitatively relevant.

“I think in that, the queer lens that I bring through that is that our queerness has gifts for the world just by the fact of its existence,” Lasdon says.

“As a queer person, or as a genderqueer person, it would not at all have been comfortable for me to start the work doing it in mixed-gender, primarily heteronormative space,” says Sexsmith, whose path in this work has been almost 100% in queer spaces.

Embodiment, and coming back to one’s bodies, can sometimes mean cutting through the barriers that might be put into place by society. Lasdon’s work encourages the journey to “come into our bodies in the ways that they are, not in the way that society tells us they should be.”

Lasdon goes on to say, “Or thinking about how we present outwardly versus how we feel inwardly and bringing those pieces together in a way that has integrity for any individual — it’s really important to feel that integrity within ourselves in a world that would have us not have that.”

Gender is where Sexsmith says Body Trust has been able to “pave a lot of movement” to explore non-binary expressions of touch and relation, and even non-binary tantra. “Radical inclusivity” in their mission means recognizing the ways in which people are affected by difference, too: body positivity (all shapes, sizes, and abilities), class (create affordable options while being sustainable as a business); and race (the four members of Body Trust are white, but they had many conversations and consults about how to continue to be a radically inclusive in regard to race, including “throwing their weight” behind events led by queer people of color).

“From the dance world there’s a thread of thought that I practice with a lot: entering the sea of sensation without drowning in it,” Lasdon says.

The thing about cultivating pleasure is that it increases one’s ability to also manage pain. Pleasure can be a way through.

“We desperately need these things in the world right now. We desperately need them. And so working with sexuality is one of the places of beauty that we can expand, that we can expand the places where it is beautiful and also other realms of touch that can help us create connection, create community, foster a deepening sense of ourselves, deal with the difficulties of being human, find relief form the hard parts of being human,” Lasdon explains.

Play and games are also a big influence in how Lasdon shapes their work, which can also help to create approachable and safe spaces for people to confront that which is difficult, painful, or scary.

Moving beyond the microcosm of the body, in a socio-political climate in which certain advances in human rights have been threatened or negated, this work holds all that much more power for resistance, too. It is a microcosm for the possibility for shift and change when people are given the tools to courageously move through potentially triggering times or experiences; think of the broader applications even on a federal level.

A workshop, for example, might be the container in which someone finds the space and tools to start to dig through “deep unconscious muck” and “not crumble in the face of it,” Sexsmith suggests. “Like, okay, that’s how the reality’s been for me for a long time but actually I want to build it into something else. Or actually, what does that mean? What other things can I put in its place? What kinds of touch or care or holding do I need to release this and move through it?”

“The climate for people working in sexuality is difficult and it’s so vital that these things are a part of the suppression of sexuality that patriarchy requires in order to have control over our bodies. It’s part of the political piece of the work I do to resist that to give us a sense of sovereignty and autonomy over our own bodies, over our own pleasure, and a reminder — that’s still a radical act,” Lasdon says.

Andrea Hillsey has always trusted her instincts, and they have served her well. She excelled at softball, listened to her gut about her future wife, and runs the successful Square Wine Company on the Capitol Square. Here’s her story.