Out at the Capitol 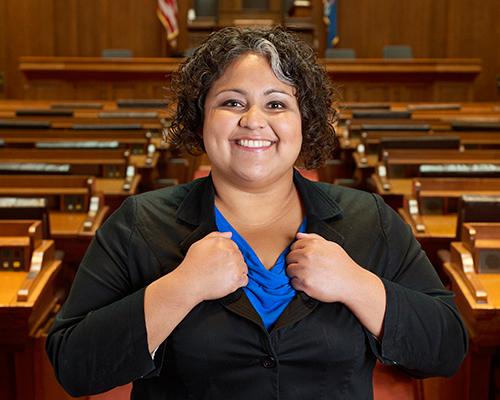 Coming out. Have scarier words ever been written? I had absolutely hidden this part of my identity since I was a little girl. I am bisexual. But for more than two decades of my life I never said it to anyone, I never wrote about it—but I often thought about it.

It is hard to pinpoint the exact moment that I realized I was bisexual. It certainly was something that I began to recognize within myself from the time I was 10 years old, at least. But I also recognized that it was something I should keep secret. Not that I received negative messages about LGBTQ people at home. In fact, sex or sexuality was almost never discussed in my family. It was at school that I received negative reinforcements around same-sex relationships. I knew to keep it a secret or be ridiculed on the school playground. For years I did not even feel that I could write about my bisexuality in my diary, for fear that someone would find it and read it.

And then, in my 20s, a historic event in pop culture set me on the path to finally coming out. I am certain I am not alone when I indicate what a huge impact it had on me when Ellen DeGeneres came out in the ’90s. I still remember how it made me feel. She made me feel a sense of freedom, made me feel “normal.” If Ellen can come out, I remember thinking, then maybe I can finally acknowledge this part of myself.

At 22 I had my first girlfriend and came out to some friends and family. By the time I was 30, I had come out to my mother and siblings and a few more friends.

But in 2010, as a candidate running for an open seat in the Wisconsin State Legislature, I opted not to discuss my identity as a bisexual woman. It was a very difficult decision, and in hindsight, I wish that I would have run as an openly LGBTQ candidate. An “out” candidate. Have more beautiful words ever been written? Unfortunately, I made the decision not to disclose my identity at the time. My opponents, at every turn, attempted to out me via a “whisper” campaign. I remember one of them attending the Democratic Party of Wisconsin State Convention that summer and asking many of the people of color delegates if they knew that “JoCasta’s gay,” apparently in hopes of pulling support away from me.

But some of the most difficult moments on the campaign trail were when I had to field questions from the press about my sexual orientation. The questions came from both reputable and not-so-reputable journalists.

“Pivoting” is the practice of changing the direction of a question.

“You know, I would be remiss to talk to you about my personal life when so many other pressing issues, like public education and shared revenue, are such important concerns in our great state,” answers JoCasta Zamarripa.

I became quite good at “pivoting,” though there was one weak moment when I was speaking with a Latino journalist who was asking me preliminary questions before an on-air interview the following day. He asked me what the difference was between my independent opponent and me. I stuck with my talking points on education, property taxes, and the like. He said he had just spoken with my opponent and asked the same question. “She says the biggest difference between the two of you is your sexuality. Will you respond to that?” It was the end of a long day, perhaps that was why I couldn’t “pivot” at that point. I got choked up and became emotional. Then, the journalist said to me, “I don’t know why anyone would run for office and put themselves on the line like this. JoCasta, I’m gay. I want you to know that.”

I went to the on-air interview the following day and they never asked me about it. I believe this LGBTQ Latino journalist looked out for me, if you will, and opted not to ask me on-air about my opponent’s comments. I do not know if some would argue that his decision betrays journalistic integrity. But I would argue that his decision displayed humanity and understanding.

A year and a half later, during the summer of 2012 and my first re-election, I made the decision to come out. I met with my campaign team. These were people who loved, respected, and absolutely supported me. Yet, they wanted me to wait until after my election as I had a primary opponent and they were concerned it would hurt me. Representing the largest Latino population in the great state of Wisconsin, many people assume that my district is very Catholic and very socially conservative. But I know my constituents. I knew they would stick with me. After all, they are pragmatic. Latino or not. Straight or LGBTQ. Catholic or atheist. They want to know that I am working hard for them. And in August of 2012, I handily won my first re-election as an out candidate. It felt great.

In 2006, Wisconsin voted in support of a ban on same-sex marriage in our state’s constitution. I was working for Fair Wisconsin as an organizer, hoping to defeat the ban, but I remember that cold November night when we lost. I remember that the Democrats had great victories that night, but we lost. I was at our election night party in Milwaukee, in the district I would go on to represent five years later. I tried to fight the tears back, but my eyes kept welling up. I remember my friend Alexa trying to reassure me by telling me that the Civil Rights movement had started in the 1940s, though it didn’t gain momentum for a couple of decades.

Alexa was right. More than just tolerance, acceptance and love for our community are growing at a fast pace, and I feel so lucky to be able to witness it in my lifetime. And I long for the day that Wisconsin will repeal the ban on marriage equality. But with Republicans in control, it will be a tough road. Even getting a symbolic resolution passed to recognize June as LGBT Pride month proved impossible.

Today, Democrats are deep in the minority in the Republican-controlled Legislature. I am a minority in the minority. I am the only Hispanic serving and the only openly LGBTQ member of the Wisconsin State Assembly, and yet I feel optimistic and energetic. I have a voice. My communities have a seat at the table because I am there advocating for us every day that I walk through the halls of our state capitol.  I have no doubt that we will repeal the ban on marriage equality in Wisconsin. As Senator Baldwin and Congressman Pocan say, “It is no longer a question of if; it is a question of when.” I am poised and ready to move ahead in a strategic manner. Repealing the ban will take two consecutive legislative sessions and then another election to be voted on by the people of Wisconsin. My party has to pick up more Democratic seats so that I can make this a reality for so many LGBTQ Wisconsinites.

In the meantime, I hope to get another openly LGBTQ legislator elected in a special election on November 19. Elizabeth Coppola is running for the South Milwaukee seat that was recently vacated by Rep. Mark Honadel. She has told me she greatly appreciates being able to confer with me about running as an out candidate. The truth is that the honor is mine. Words cannot sufficiently describe what it means to me to be told by young LGBTQ men and women that my coming out has been impactful for them. It makes this journey that I am on so very worthwhile, and I often tell young people, “I’ll be at the capitol, working hard for us, waiting for you to get here.”