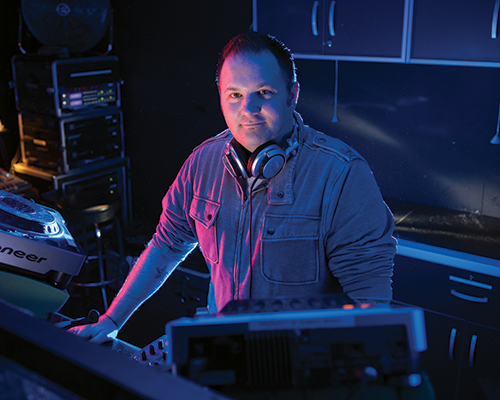 When you think about nightlife in Madison, a lot of different venues may come to mind. Some vary on themes and are aimed toward certain crowds, but one thing is a must: good music. Disc jockey Tim Walters knows how to keep crowds happy. This, in turn, makes him happy, too.

“What makes me the happiest is watching people dancing and having fun while I am DJ’ing,” says Tim.

Growing up in Oregon, WI, Tim always wanted to be a DJ, and recalls having his own make-believe radio show as a child. Other kids his age were pretending to be astronauts or firemen and setting up lemonade stands. Tim would make tapes for his friends and family. As he got older, a lot in his life changed, but his desire to be a professional DJ never faltered.

Tim loved Oregon, but craved something bigger—something more diverse. He knew that if he wanted to pursue his dreams, he would need to relocate. In 1996, he relocated to Madison and took a part-time job at an LGBT coffee house/gift shop called We Are Family (now called Lakeside Deli), which was next to the old Maneuvers Bar (now called The Up North Bar). As luck would have it, DJ Tony Ritschard worked at both places and helped Tim get his foot in the door as a DJ by giving him music, mixes, and tips.

After a lot of practice and trial and error, Tim’s hard work began to pay off. He got his big chance to show what he could do when Ed Grunewald opened up Club 5 (now FIVE Nightclub). It was then that he began to DJ one night a week—and eventually several nights per week as he gained more experience.

Tim explains that he was never more proud or excited than when he fulfilled his childhood dream of becoming an air jockey a few years ago. He was on-air with Z104 The Hit Music Channel and 96.3 Star Country for a couple of successful years. Currently, Tim hosts a show Monday through Friday (6–11:00 p.m. Central) on ElectricFM.com, an Internet dance station broadcasting from New York City.

When he’s not on-air, Tim DJs events such as Madison Pride, Fruit Fest, Woof’s Pride, PrideFest in Milwaukee, and UW-Madison’s 10% Society dances, and he guest DJs at Shamrock Bar, Plan B, SOTTO, LaCage in Milwaukee, The Office in Rockford, charity events, and of course FIVE Nightclub, where he got his start.

Tim considers himself lucky to have met some incredible people in his line of work, including national artists, singers, DJs, and many who have become friends.

“I’ve been asked advice from people who want to be DJs,” says Tim, “And the simplest advice I can give is to know your crowd, pick the right music, and—above all—be nice and have fun. It will show in your work!”

Tim and Bradley Tabor, his partner of almost six years, live with their cats Lola and Rocco.

“When you love what you do, you will find peace and harmony just happens in all the other areas of your life as well,” Tim says.

Trina Avalon-Pirahna (Christopher Wilford) is a local drag entertainer who has performed in various nightclubs and charity events around Wisconsin. She is the current Miss FIVE Nightclub Plus and introduces Our Lives readers to other entertainers of interest to our local LGBTQ community.