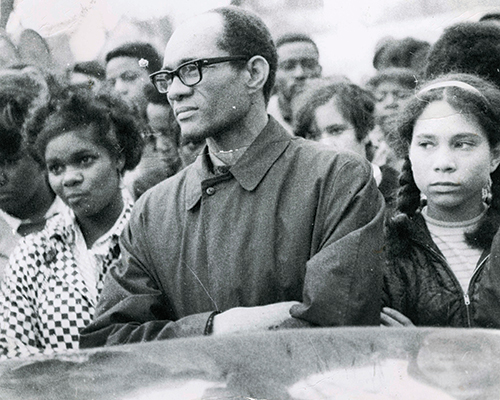 In some losing statewide votes on gay marriage, there were assertions that lack of support from African Americans hurt the cause for LGBTQ rights. In fact, more detailed analysis of California’s vote on Prop 8 showed that when other variables of income and class were factored in, racial difference between African Americans and others did not exist. In Wisconsin’s gay history, we have one of our own instructive examples on marriage equality.

In most historical discussions of Wisconsin’s 1982 first-in-the-nation gay rights law, there is usually a nod to State Assemblyman Lloyd Barbee, who had first introduced the bill before State Rep. David Clarenbach authored and passed it. Most do not acknowledge the price paid by pioneer Barbee.

Barbee, born in Memphis in 1925, grew up in the South and joined the NAACP at the age of 12. After World War II service in the Navy, he came to Wisconsin in 1949 to attend the UW Law School on a scholarship. Awarded his degree in 1955, he served as chairman first of the Madison branch and then in 1961 of the statewide NAACP. He moved to Milwaukee in 1962 and led the lawsuit to desegregate the Milwaukee schools. After a lengthy judicial process, he won the case in federal district court in 1976, and after further legal maneuvers there was a settlement to desegregate in 1979.

Barbee had a lengthy record as a fighter to reform Wisconsin laws. In his first session in the legislature, Barbee took up abortion reform.

For the second session, he went whole hog with AB 678, “Crimes against sexual morality.” In his third session, he again dealt with sex crimes and abortion, but added repealing laws against marijuana and prostitution.

In the fourth session starting in 1971, following Stonewall, he took up all of the above again and added bills prohibiting discrimination based on sexual practices and in favor of same-sex marriage. He again pursued these goals in his fifth session.

Needless to say, Barbee’s farseeing bills did not elicit groundswells of support in the legislature of those days. Barbee himself was realistic and philosophical about this, drawing on the experience of how long African Americans had been battling for equality and rights.

The Milwaukee Courier, the state’s leading African American paper, which claimed 40,000 readers weekly, wrote about Barbee at the time, characterizing him as a reform legislator. “Introducing controversial legislation seems to be Barbee’s forte, according to some, but Barbee views such bills as legislation that would not be immediately passed, but might keep politicians abreast of the need for reform in our laws.”

That the bills were controversial was in little doubt. On July 14, 1973, the Courier published a letter signed, “A Senior Citizen, A Tereesa Muehleakamp.” The letter was headed, “Rep. Barbee’s bills seen as immoral.” Ms. Muehleakamp wrote, “I am sure he doesn’t represent the wishes of the Black Community. Black people are no more immoral than white people. I suggest that you find a man now to replace him at election time—a man who will let it be known that blacks do not condone his immorality and that whites would not flee to the suburbs because of rape, etc., etc.” The letter-writer specifically cited the bill to “permit persons of the same sex to marry.”

Barbee was not shy about his push for reform that would benefit gays. In 1973, reporting in his regular (usually biweekly) column in the Courier, he wrote of his sex reform advocacy on two occasions. Describing how the Assembly Judiciary Committee was considering a bill to prohibit discrimination on the basis of sex, he opined, “The changes to eliminate distinctions of race, sex and sexual preferences are long overdue. Lets us work to effect such changes vigorously and expeditiously.”

Then, noting his attending a national conference on criminal justice where he proposed repeal of “victimless crimes” laws, he specifically mentioned “private sexual relations among consenting persons….” Barbee also went on the radio show “The Gay Perspective” on WZMF to discuss repeal of sex laws for consenting adults.

It could not be said that Barbee’s constituents were uninformed about his sex-law efforts. In April 1971, the Courier headlined a news story “Bill takes government out of bedroom,” and proceeded to discuss sex reform. It noted, Barbee said, “that one of the effects of erasing the so-called sexual morality crimes would be to reduce police entrapment of prostitutes, male homosexuals, etc., and cut down on the harassment and blackmail of homosexuals. Prostitutes and homosexuals are humans. They should be respected and accorded fair treatment.”

Later that same month, Barbee himself discussed the corrupting effect of enforcing such laws, noting that requiring officers “to stick their noses into bedrooms, parks, cars, and restrooms makes degenerates out of policemen.” Clearly these were enforcement tactics used against gay men at the time. Barbee pointedly said, “What we seem to be developing here is a public crop of professional voyeurs or peeping toms.”

Barbee’s commitment to fight for gays came from his championship of all those oppressed. He spoke out for the Black Panthers’ fights against racism, women’s struggle for equal rights, the efforts by Native Americans in the Menominee to maintain their own government, welfare rights, and hippies at smoke-ins. He viewed the enforcers of law skeptically, saying, “The vice squad, in my mind, should be immediately abolished.” On the occasion of J. Edgar Hoover’s death, his view was that “the runt will grunt no more.” When endorsing him for re-election in 1972, the Courier noted, “He is acknowledged throughout the country as a champion of the underprivileged.”

Such righteousness resulted in a challenge to Barbee in the 1974 Democratic primary. Robert Swan (brother of State Senator Monroe Swan, elected in 1972) announced on July 13 that he would challenge the incumbent. Robert Swan complained Barbee “had failed to provide true representation of the people in his district by introducing legislation that ‘does not reflect the feelings of the 18th district.’” Robert Swan specifically mentioned the measure that would “permit men to marry men.”

In the August 17 issue, the Courier broke the story of smear tactics being used in the campaign. “Some of State Rep. Lloyd A. Barbee’s more controversial Assembly bills are being waved about by his opponents in their efforts to portray him as unfit to serve … Campaign workers for Robert Swan, Barbee’s opponent in the Sept. 10 Democratic Primary, have been distributing a large white poster with red lettering listing some of the bills and accusing Barbee of ‘painting a very negative image for our community.’” The poster carried the disclaimer “Paid for by Citizens for Swan.” Among the bills listed were AB 442, eliminating criminal sanctions against sexual acts between consenting adults, and AB 185, allowing persons of the same sex to marry. The poster followed a letter by Sen. Monroe Swan mailed to Barbee’s constituents listing the same bills and with his comment, “I believe these bills deal with issues that do a great injustice to the image of our community.” It was reported that 500 posters were distributed and an effort was made to get these materials to black churches.

The Courier, in the same August 17 edition, ran an editorial called “Dirty Tricks.”

It deplored the “moralistic smear campaign” and referred to using the bills as “red herrings.” The paper felt “Swan and his backers have resorted to the sad, desperate, ancient, and dangerous approach of emotionalism, distortion, and character assassination.” A further characterization was “the cowardly and divisive crusade” by reactionary opponents. In referring to Barbee, the editorial gave him attributes of courage and brilliance, claiming his “litany of progressive legislation” had made African Americans “a force to be reckoned with on the Assembly floor.” There was, according to the paper, “no better Wisconsin legislator.”

A letter signed by Fred A. Swan, Citizens for Swan, was printed in the next edition that claimed the Courier’s article on the smear tactics was “very biased and subjective to say the least, but the heading was obviously just plain false representation.” There was little doubt, however, where the Courier stood. In the story announcing Robert Swan’s run and that one of his aims was to get more black representation on the school board, the paper included a line that Barbee had already introduced legislation for district elections to the board that likely would have accomplished that. They also mentioned that Barbee was the author of fair-housing and consumer-protection legislation. In a later editorial commenting that opponents claimed the controversial bills were negative, they said, “They have not said why.”

On August 24, the Courier placed a letter in their special church news section. It bore the headline, “Rev. Gregg asks support for Lloyd Barbee.” The reverend was the distinguished pastor of the St. Matthew Christian Methodist Episcopal Church. Rev. Gregg put Barbee in the light of “a dedicated fighter for our community” who had worked for fair-housing laws, the enforcement of non-discrimination law, and community services. “We need a person to represent us in the Capitol who is honest, courageous, and uncompromising.”

Needless to say, the Courier endorsed Barbee in the primary, citing “his distinguished record of struggles against racism, classism, and sexism, through law.” In reporting on Barbee’s victory, the paper noted that “A great deal of Swan’s support came from precincts with a larger percentage of white voters located on the district’s west side boundaries.” These white voters would also be highly unlikely to be Courier readers. On election night, Barbee noted that he declined to make it “a political skunk fight,” claiming “my constituents appreciate me representing them enough not to resort to sewer and garbage politics.”

After winning the general election, Barbee charged that in the primary, Republicans had crossed over to hurt him. The data seem to support the claim. In the September primary contest, out of 1,429 votes cast, the Republican candidate Anderson got 29 votes, or 2 percent of the total. But in the November general election, out of 2,352 votes cast, the Republican Anderson got 399, or 17 percent of the total.

Thus, the 1974 primary election appears to show that the African American community in Milwaukee, through both its media and the votes cast, did not oppose Rep. Barbee for his efforts for progressive sex reform, including marriage equality.

In the early 1970s, then, gays in Wisconsin had a champion in State Representative Lloyd Barbee. Demanding reform of the laws and an end to police practices that oppressed us all, he announced in the public realm a vision of equality and fairness. For that he endured hate mail, public attacks, and an election challenge with smear tactics and dirty tricks. Undaunted, however, Lloyd Barbee won and remained a champion.   n