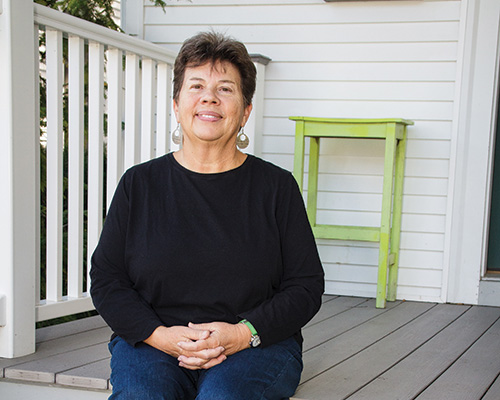 In Madison, there were two organizations dedicated to supporting the LGB community—the United and the Gay Center. When Jane LaFlash’s 16-year-old son came out to her that spring, she went right to the phone book and looked under “gay.”

“I was completely ignorant,” she says frankly. “Knowing me, though, within days I went to do as much research as I could.” That work, and flipping open the phone book, are what brought the Gay Center to her attention. She called them up.

“I was apparently the first parent to call asking for help,” Jane notes.

It was through the GC that Jane was put in touch with Adele Starr, who, in 1976, had founded the Los Angeles chapter of Parents and Friends of Lesbians and Gays, a gay rights and acceptance organization known then as Parent FLAG, now as PFLAG. Over the next year and a half, as Jane tried to get a Madison PFLAG chapter running, Adele “would call me every month just to see how things were going,” offering help and advice.

Every month, too, Jane would set up shop for meetings…and wait. Sometimes, she was the only person there. Other weeks, one or two gay men would show up. Once in a while, a parent would shyly arrive as well. She stuck it out because, as she explains, it was too important not to do. “I was a young mother. I was 19 when Chad was born, and I was worried about him. But I knew—I have a gay son, that’s a fact over which I have no control. So what can I control? Me.”

Jane’s younger brother, Tom, came out as gay some time after her son did. She grew up in Middleton as the oldest of six kids. It was a pretty standard Midwestern upbringing, nothing that might have indicated the eventual path her life would take. She ended up working as a microbiologist at the State Lab of Hygiene and retired 10 years ago, and has long since been an avid gardener as well. But Jane’s professional experience only tells some of her story.

In 1985, the nascent PFLAG group got a major boost when she applied for and received a startup grant from the New Harvest Foundation. Working with the Gay Center, then, PFLAG Madison began holding workshops and attracting more interest from fellow parents looking for help understanding and supporting their gay and lesbian children. Around that time, too, Jane met Joann Elder and her husband Joe through their gay son. Joann quickly took on a leadership role within the organization, “which made all the difference in the world,” Jane explains.

There was, understandably, a lot of enthusiasm in the gay community around Jane’s PFLAG work and general willingness to support gay youth. The staff at the GC eventually encouraged her to start a support group for gay teens, too. As a straight mom she was seen as a “safe” choice to lead such an organization—no one else at the time wanted to touch it. That group ran for over 3.5 years, every Saturday afternoon at the Memorial Union on the U.W. campus, with facilitation help from a gay man and a lesbian woman. “Volunteers can do things that professionals can’t,” Jane says. They had the flexibility to just start meeting without having to go through committees or bureaucracies first, and Jane frequently took phone calls from distraught youth and simply dropped everything to go meet with them and make sure they were cared for.

Eventually, though, Briarpatch Youth Services stepped in to create the more formal Teens Like Us (which still exists) as the first group petered out. Jane stayed with PFLAG, however, as that organization continued to expand and adapt to the changing times.

Between 1987, when the group moved into the Friends Meeting House, and 1989, when they participated in Madison’s first Pride Parade, the local PFLAG had about 50 people on its mailing list and a rotating group that attended meetings at any given time. There were a wide variety of needs and attitudes with the parents who came—those much like Jane and the Elders, wanted to get educated to help their kids as much as they could, others came looking for support as they struggled with acceptance. In one case, Jane relates wryly, a parent ended up leaving the group, complaining that “you guys are too happy about having gay kids.”

For a long time, the group’s entire yearly budget came from shared profits they earned by volunteering at the annual Magic Picnics sponsored by the Hotel Washington and held at Brittingham Park.

Her work with PFLAG and gay rights in general earned Jane attention from other corners, too. In 1989 she was asked to be on the Wisconsin Conference of Church’s Taskforce on Sexual Orientation, where they drafted a letter to churches across the state about supporting the parents of lesbian and gay children who were members of their congregations.

The Madison PFLAG chapter is now one of the longest running in the nation. Kay Heggestad, another longtime member and leader, set up their table at the Dane County Farmers’ Market and has helped keep it there for 20 years. Generations of new U.W. students have likely stumbled across the smiling faces of PFLAG parents there, where they might have shyly taken one of the rainbow ribbons to pin to their backpacks.

“Of course this has changed me as a person,” Jane muses. “How could it not? We’re glad we have gay kids. We’ve learned so much about them and about ourselves especially, things we wouldn’t have known before or otherwise.”