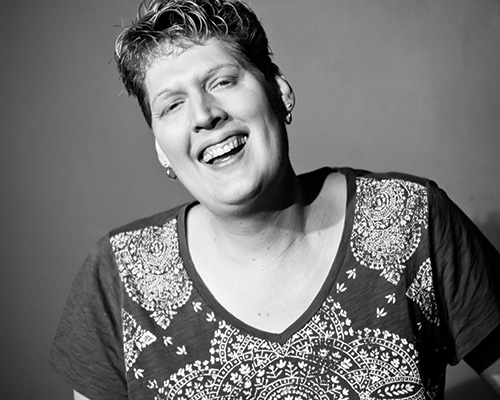 Let the beauty of what you love be what you do.
—Rumi

Sometimes I feel as if embody the definition of queer.
I’m talkin’ multiple definitions of that wild and wonderful word:

I can’t begin to summarize all the times I have been judged within the context of the above definitions, but I can say it’s been on more than one or two occasions. It just seems, in my life, I’ve run the gamut. And, for the most part, I’m proud of it.

I’ve spent my career working with people with disabilities and in the arts. I began my career as a musician at age 12 and played with “working bands” (playing in clubs and bars and for weddings) until I began college. I had several scholarships, and they often obligated me to play for theater performances. I got hooked on theater and ended up working with several professional summer stock companies in the Chicago area. Within a few years, I wrote, directed and produced (on a very small scale) theater for children. I am still using those techniques today—that is, I write to the highest level of talent and to the personalities of any actor I work with. The results have been very honest and compelling performances.

Insight in life seems to come at different times and for different reasons. It came to me as I was fleeing death threats from the conservative town my family and I were living in at the time. It was a no-brainer. We pulled up roots and moved to Madison. Shortly after we arrived, I took a position in lower-middle management working with people with disabilities. Perhaps it wasn’t the best of gigs based on my experience and education, but it was a foot in the door. It was also my first public job as Kelsy.

Within weeks of starting that position, I heard a murmur of some seed money and a pet project of my supervisor’s boss. She was motivated to find someone to start a theater company for people with disabilities. I jumped at the opportunity. Yes, I was socially awkward, but in completing my graduate work (an MBA), I discovered I was a pretty fair writer and a good administrator. But the much larger factor, the factor that changed everything, was that I was finally able to be myself. I had a voice. And that was absolutely freeing. I had a lot to say, and now I wasn’t afraid of saying it—and I wanted that for others, too.

As an avid theater buff, composer and aspiring playwright, the gaping hole in theatrical repertoire was obvious. There were very few plays about people with disabilities, and of the ones that did exist, people without disabilities performed 98.9 percent of them. No one was holding up a mirror to this significant part of our society. Sure, there have been some historic representations. There have been “special” stories. The heroic. The saccharine. The pitiful. But those weren’t the people I knew. First of all, the people I knew weren’t any more or less special than I or anyone else was. Sex. Drugs. Happiness. Depression. Abuse. Kindness. All of it! The good, the bad and the ugly—and no one was telling their stories. No one was holding a mirror up to nearly 20 percent of our society. Talk about underrepresented!

I was lucky enough to be able to combine my careers about 15 years ago when I became the founding Artistic Director for Encore Studio for the Performing Arts. Encore is a unique organization that supports and fosters the talents of actors with varying disabilities, including physical disabilities, cognitive disabilities, and people dealing with mental health issues. We also support many people within the spectrum of Autism. This is an area in which I have a very strong connection.

Finding connections in this world is often difficult. As a transgender lesbian living at the edge of the autistic spectrum, I have a keen understanding of the complexities and complications this can manifest. Before I was out as queer, I was aware of being on the spectrum (although I didn’t call it Autism at the time). Me, my parents, my siblings and my children—the genetics are strong. This connection not only helps me to relate to the people I support, but I think it helps the people I support relate to me. We’ve found our natural habitat—or perhaps created it.

Encore is a repertory company that sees the world through a different set of lenses. It’s my home and where I feel comfortable. Supporting the talents of the people I work with—which include the Encore Studio repertory company, the Encore staff, and the other community actors we have the fortune to work with—is a joy. This is not to say it’s easy. It’s been said that nothing good comes easy, and I would say, in many cases, this is true. We work very hard, all of us: the directors, the coaches and the actors. And the work we do is important for even the most liberal Madisonian to the most conservative Wisconsinite (both often present at our performances).

Queer and theater go together like Batman and Robin—um, Ernie and Bert… Ellen and Portia? You know what I mean. My point is that this is no different when the repertory company is comprised of people with disabilities. Because we write to our actors’ talents and experiences, we have covered many issues that relate to the LBGTQ community.

In one of our earliest performances, one of our actors came out. He was in his late forties, and it was his first time saying it. It was very public. It was controversial. It was wonderful! There was joy in his voice. There was absolute pride. Cathartic moments often happen for actors, and that expression is what changes perspectives in this world—such as seeing people with disabilities as having sex lives or being queer.

Encore is one-of-a-kind, and its soul comes from the actors, directors and playwrights (and what a soul it is). That said, we need even more people involved. There are so many people with so much to say. I have consulted and written for other organizations and have been amazed by the community support they have received. I think some attend out of pity, or in hopes they will see something “special.” But “special” is not what I get when I interview these amazing groups of people, and it’s not what I write. This surprises people. If we’re lucky, they leave saying the most commonly exclaimed phrase I’ve heard since I began in this field: “It isn’t what I expected.”

The Stories Are the People

Pam (not her real name) is a person with autism and several mental health issues. She was well known in the world she lived in. You could say she was notorious. She said what she thought whenever she thought it. It was sad that many people would tend to avoid her if they could. She was one of Encore’s first actors and hers was the first story we told. We spent a lot of time one-on-one as I interviewed her and she told me incredible stories. Not sweet, not heroic, but compelling and real. And no one in the world could tell them like she did. It was the beginning of something big. Since then, Encore has produced over 50 original pieces—many full-length.