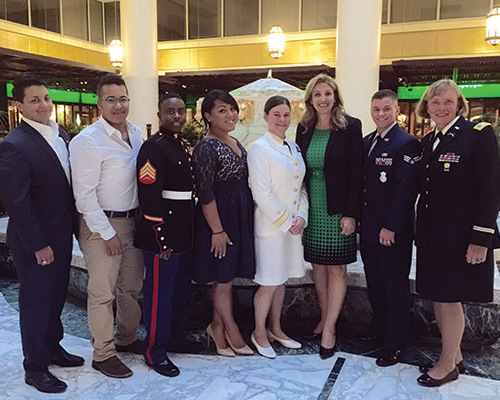 It’s been a memorable couple of months since I attended the Pentagon Pride event. In the July issue of Our Lives I shared my thoughts about how cryptic communication can sometimes be at high levels in our nation’s capital.

Just a month after Pentagon Pride, Secretary of Defense (Dr.) Ashton Carter put words about Transgender military service into action. In his July 13 DoD News Release the SecDef directed several historic actions. First, he announced the formation of a Working Group to study, over the next six months, the policy and readiness implications of welcoming transgender persons to serve openly. He also provided standardization across the Service, and a measure of protection for those involved, when he elevated decision authority for all Service members diagnosed with gender dysphoria, or who identify themselves as Transgender, to DoD (Under Secretary) level. Perhaps most significant was his statement that the Working Group will start from the assumption that transgender individuals can serve openly without adverse impact on military effectiveness and readiness.

Secretary Carter indicated DoD has proven itself to be a learning organization and that “over the last 14 years of conflict, Transgender men and women in uniform have been there with us, even as they often had to serve in silence alongside their fellow comrades in arms.”

I suspect it’s not a coincidence the DoD announcement came less than three weeks after the President invited current and former Transgender military service members to attend the June 24 White House reception in celebration of LGBT Pride Month. I was honored to represent the Army and was one of four Transgender members of SPART*A (Service members, Partners, and Allies for Respect and Tolerance for All) to attend, wearing the uniform appropriate for our gender identity. Seven of 13 individuals at dinner later that evening had met the POTUS, the VPOTUS or the Democratic Leader of the House of Representatives. It was truly an honor to be in the company of such distinguished civil rights advocates.

I had the opportunity to speak June 30 at the inaugural US Navy Base, Coronado Island Pride event.  Although it took years for a Navy Pride event to be approved on the West Coast there are signs of progress. The following day, all the Pentagon stars aligned as the Secretary of the Navy joined the Army and Air Force and raised the adjudication authority for transgender Sailors and Marines to Pentagon level.

The Pentagon study shouldn’t be complicated. Eighteen of our allies figured this out years ago, and DoD has their experiences to draw from. In those countries, Transgender troops have served openly for some time and have proven questions about abilities or physical capabilities are rooted not in practicalities, but in ignorance and bias. There is no doubt that the SecDef’s action will ensure everyone who’s able and willing to serve has the full and equal opportunity to do so. It is time all service members are treated with the dignity and respect they deserve.

COL Sheri Swokowski (Ret) is a civil rights advocate with a focus on transgender military service. She has worked as a Pentagon analyst and as a Regional Human Resources Director for the US Forest Service since retiring from the military.