Still Dancing After All These Years 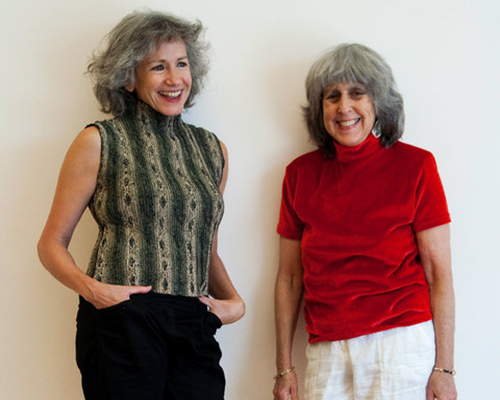 TAPIT/newworks Ensemble Theater is celebrating its twenty-fifth year as an independent theater troupe. Danielle Dresden and Donna Peckett, the forces behind it, describe their journey as a series of accidents and serendipity. Others describe them as the most determined and dedicated people on Madison’s theater scene. As co-artistic directors, their complementary skills balance and ground the company, combining Danielle’s playwrighting and acting talents with Donna’s tap dance, choreography, and acting abilities. Add to that their combined commitment to education and community involvement.

Danielle spent her early life in the universities and theoretical physics institutes where her father worked, all over the U.S. and Europe. In tenth grade, she went to three different high schools in three different countries. She jokes that it’s a great background for a touring life. She sees her playwriting as informed by that exposure to different environments and constant change.

Donna grew up in a small town in Florida, where her family were the only Jews. She studied tap as a child, but stopped because her parents didn’t think it was a good idea. After high school, she went to college in upstate New York for a year before dropping out and going to New York City. It was the late 1960s, and Donna describes being a crazy hippy and part of the revolution. She followed her best friends to Madison and finished her bachelor’s degree at UW.

She said, “I started realizing that I needed to do something more with my life. Show business was interesting, but it lacked dimension because it was all about fame instead of art.” She worked with the Bread and Puppet Theater in New York, and with Theater Grenade in California before returning to work with a political group called Wisconsin on Tap. She made friends with some modern dancers. She describes being in the middle of the tap revolution that was going on, taking lots of classes and meeting hip black tap dancers who were reinventing tap. Taking dance classes everywhere she went, Donna travelled through Europe and Canada, and even spent eight months in Israel on a kibbutz. Back in Madison, Donna met Joel Gersmann and worked with him at Broom Street Theater for eight years until she and Danielle founded TAPIT/newworks.

Danielle says she kind of fell into theater while at the U.W. “My first real theater education happened because I wrote down a 5 instead of an 8 on a registration form, and ended up in ‘Fundamentals of Acting’ instead of a survey course,” she recalled. She was hooked. She got involved in Women’s Permission Theater in the 1970s. She was disaffected by traditional approaches that seemed about ranking instead of art. When the San Francisco Mime Troupe came through Madison, she took a class from Harvey Goldberg, and thought, “Wow, you can combine these things in a really exciting way.”

Danielle’s first produced play, “Signalized,” performed at Broom Street Theater. Donna’s Broom Street career started as a tap dancing priest in “My Son John” in 1976. In 1979, Donna connected with the people who started Wisconsin on Tap.

Donna had been teaching tap dancing since her return to Madison. She was working for the U.W., and they decided to get rid of her teaching space. While looking around for space to rent, friends suggested that she buy the Yellow Jersey bicycle space on Winnebago Street. Danielle suggested forming a dancing and theatrical company. She was taking the arts administration program at UW so that she could figure out how to make a living in the arts. TAPIT/newworks became her master’s thesis, “Tapping into the Arts: a new arts organization takes it first steps.”

From a need for space to teaching tap dancing, a new performance arts non-profit was born. They thought that they’d keep the bike shop as a tenant downstairs and teach tap upstairs. Donna says, “You can’t make a living teaching tap and creative movement.” Then Yellow Jersey moved out. They decided to teach downstairs, and moved into the upstairs.

Danielle says, “You learn really different things in school about arts administration than you do in a brand-new organization doing something that nobody can define and that does brand-new work. We don’t have an institutional model. We’ve never been easy to understand, but we’ve survived for 25 years!”

Donna taught a class for the theater department on the implications of tap dance on gender and race. She said there’s very little understanding of authentic American tap dancing. “If you study the roots of that form, you understand the roots of America. It’s not known because of racism. People don’t think of tap as African American, but tap has its roots in African American culture. It’s my job to set the story straight.”

Danielle’s focus is on playwriting. For the last five years, she has been a panelist at the Last Frontier Theater Festival in Alaska, working with playwrights August Wilson, Terrence McNally, Paula Vogel, Emily Mann, and Edward Albee.

What’s up next? They’re working on “Bullying: The Musical” with an all-youth cast, which they hope to mount next spring at the Barrymore. They’re also in development for “I’ll Be Right with You,” about personal caregivers, inspired by Donna’s stepmother’s caregivers, as well as a new children’s show about food.