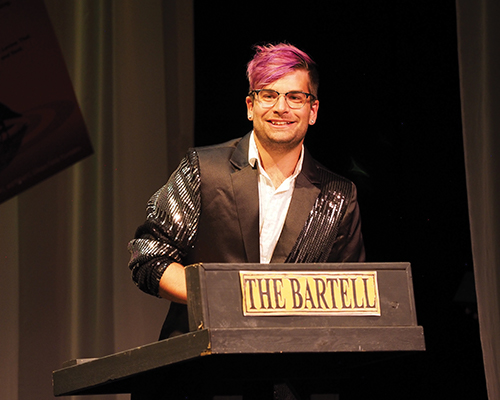 Growing up in a conservative, religious environment was hard; growing up and realizing you were different than what your zealous schooling said you should be was harder.

While in college, I became a board member and the technical director of the local community theatre, State Street Theatre Company. During my tenure I attempted to direct “Inherit the Wind,” the play about the famous Scopes “Monkey Trial” challenging the teaching of evolution in school.

My conservative school was alerted to this by various professors and community members. In response, they confronted me on their disappointment with how I was involved with such a sacrilegious production. They attempted to shut down my auditions, community members sent me article printouts from “Answers in Genesis” (the Ken Ham blog), and local pastors and priests scared my cast to the point that all dropped out save for one.

With the shadow of this controversy weighing on me, I was forced to drop out as director for fear of retaliation from my school’s administration. With the production on hold, several news outlets picked up the scoop and the story was published in various local and national media outlets including Playbill and Broadway World.

The saddest thing about this episode is that, while my school thought the play was only about creationism versus evolution, they missed the greater message. The play, written during the height of McCarthyism, was a spotlight on the repression of thought and free speech; an irony not lost on me today.

I was labeled a heretic by my college, for this and other episodes in which I called out hypocrisies. While I was forced to graduate early with a “washout” degree, I had gained something that took me 22 years to realize: I had my own thoughts and opinions that mattered. I found my voice through all those trials and tribulations. Moreover, I found that I could accept who I was without fear of some sort of divine retribution. I publicly came out as gay on my graduation day and my school disowned me.

Looking back now at the interviews I gave, I have to laugh. I was still so naïve, but I was also playing the long game. I had to couch every opinion I had about the episode in a political manner so that I wouldn’t anger my school’s administration any further. I had to reiterate that I believed in creationism, even though, internally, I was starting to have some seismic changes in options and beliefs. I remember getting phone calls from local TV stations asking to do live on-air interviews and turning them down feeling that, while that might make me feel better internally, it would only perpetuate and draw it out longer. I put an end to it and tried to finish my senior year with my head down. That ultimately didn’t work.

For the first time in my life, I had stood up for myself and had an opinion different than what was fed to me by my church or school. It was really hard to stop talking after that. It started because I came out to family and close friends the summer before and, once that bird had been freed from its cage, the whole damn zoo wanted out as well. Years of pent up questions and frustrations, anxiety and internalized self-hatred about who I was, welled up and finally detonated. It was a controlled burn to be sure, but it was enough to end up under the magnifying class of my school.

I now live in Madison as an openly gay man. While the internal scarring of an upbringing in the religious right will always be there, I have to marvel at how far I’ve come and how much I’ve grown. I’ve become more of a fully realized person and discovered who I am more in the past five years than I did in at any time prior. I’ve gone from being the wallflower in high school to being an outgoing, engaging human, producing shows and having more friends and acquaintances than I ever thought possible.

Directing the upcoming StageQ production of “Southern Baptist Sissies” will be a victory lap for me. Not only do I get to finally direct a show, but I get to do so on my own terms about a topic that very much flies in the face of everything I was made to believe growing up. It’s very cathartic indeed.

The ability to tell stories on stage, giving voice to the voiceless, sharing in the human experience is a tradition that I am so lucky to have in my life. StageQ not only allows me to continue the love of theatre that sustained me during so many trying times, providing an outlet for creativity, and fostering a sense of community; they constantly show me the beauty that is being yourself: Unfaltering. Unwavering. Unapologetic. n